You've met some of the fleet, and some of the dogs, I figure it's time to introduce you to some of the characters who make Dock Six a place worth spending too much time.


I am a boat addict.  Most of the inhabitants of Dock Six are boat addicts.  But Jack is beyond addiction.  Jack has a PROBLEM.

Y'see, some of us like to fix up a boat, then sail that boat and then sell the boat to buy another boat.  Jack skips most of these steps, concentrating on the "sail that boat"  and "buy another boat" parts.  At last count, I think Jack will admit to owning 7 sailboats  in varying states of repair, and a barn full of parts from boats thatwere beyond repair.  Jack's attitude is that it is often cheaper to buy another old boat than it is to fix anything major on a boat... and he's not wrong.  For him.  (More on the different philosophies of boat stewardship in a later post. )  See, Jack's not a chandler, or a boatbuilder, or a refitter, he is a sailor, first and foremost. If a boat doesn't need it to sail, he's not worried about fixing it.
The Flying Dutchman rotates his armada in and out of his slip on Dock Six,  sailing two or more in a season.  He's the local expert on McVay boats, the defunct East Coast builder of the pretty Bluenose and Minuet daysailors, and the Micmac full keel small cruiser.

Here's Jack and Bas heading out in his Bluenose: 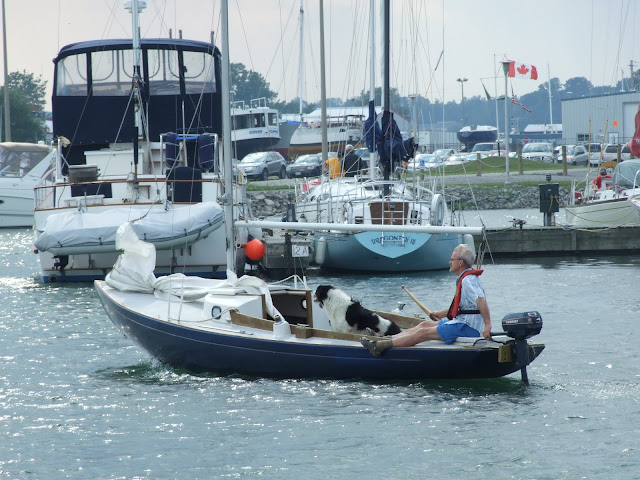 Jack primarily sails single-handed, except for the ever-loyal Bas, but once in a while he will convince Walter to join him as crew.  Here they are, showing off the pretty Minuet: 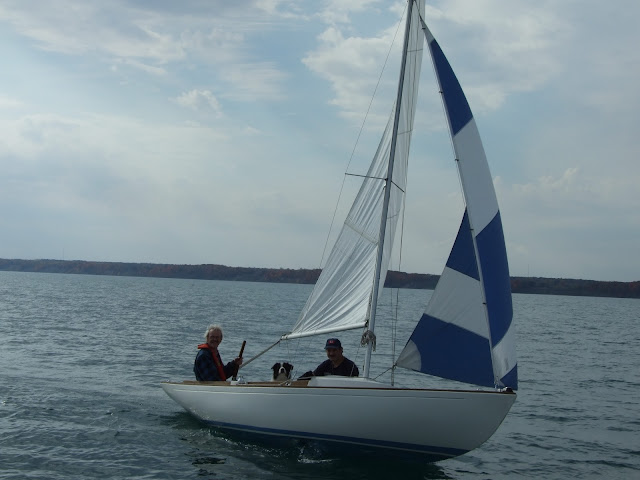 Jack is a proponent of the "Fire Department" approach to sailing- when everyone else is coming in, he can often be seen heading out.  He refuses to listen to weather reports because "Bas might get worried."  The man never gets ruffled, never loses his composure, and never stops having fun.  He is a SAILOR, dammit! Below is a rare photo- it may be the only documented evidence that Jack has ever reefed his main sail. 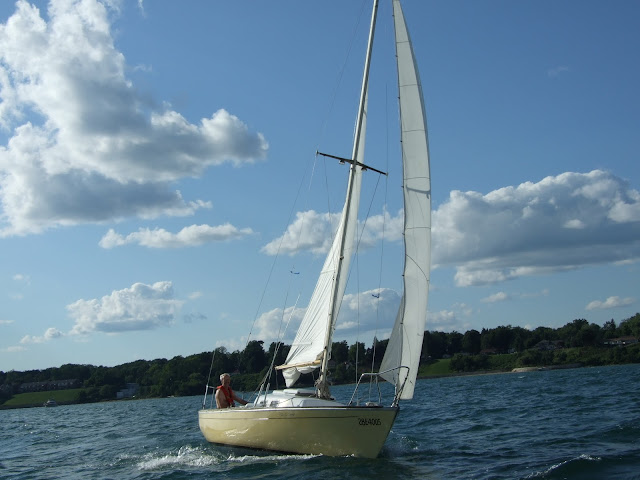 Jack is also a better-than-fair photographer, responsible for some of the photography shown here in the Chronicles.  Thanks, Jack!

Edit:  The DutchmansDaughter asks, "... if Jack is the man sailing the boat, how can he possibly be the one taking the pictures?" 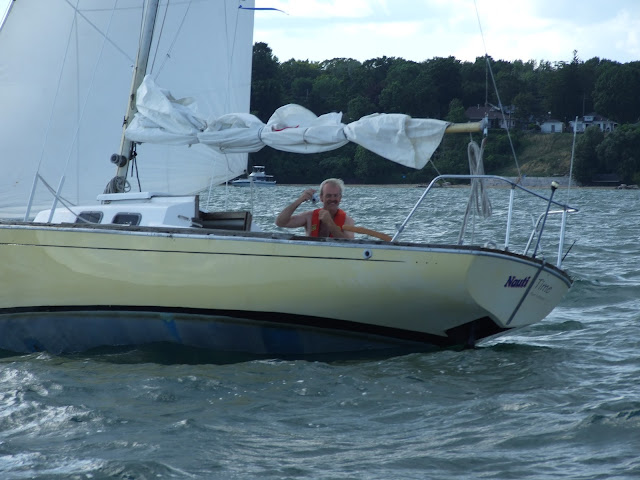 Posted by Dock Six Chronicles at 23:07