"His boat is big and strong and bold, she has a stalwart bow...." 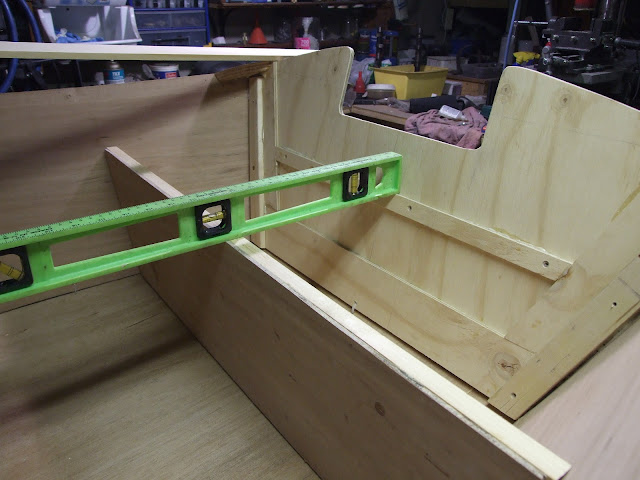 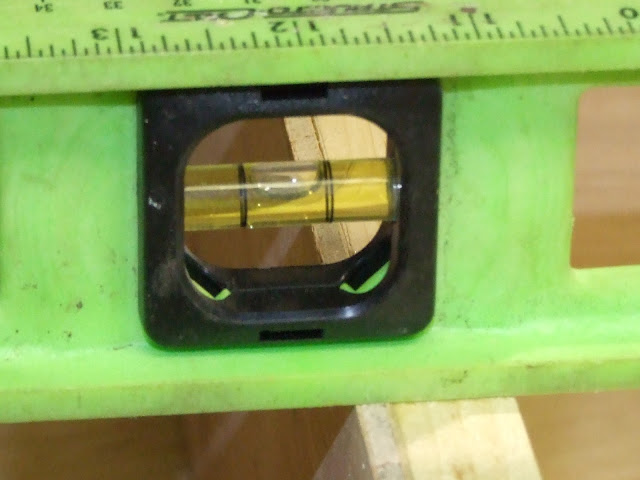 Now the part I have been dreading- installing the gunwales. The gunwales have to be bent around the top of chines, and I figured that if I made any major errors in construction, this is where I am going to find out, all at once, catastrophically- either the gunwale will snap ( no big deal) or the gunwale will cause the thin chines to buckle under the stress loading. I had originally planned to keep the gunwales simple, and just bend a 1x2" x10' length of pine, then cut off the excess. I started at the bow and was halfway to the mid frame, when I realized that the gunwale was too stiff. So, I ripped 1/8" off the thickness. Now it bends fine. I hung one of the scrapped temporary frames from the ceiling, and hung every clamp I own from it. Since I am working solo, I had to plan out what was gonna happen, and how I was gonna do it. 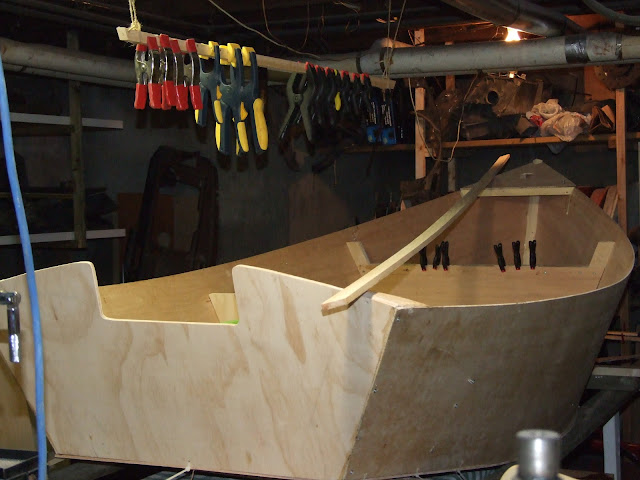 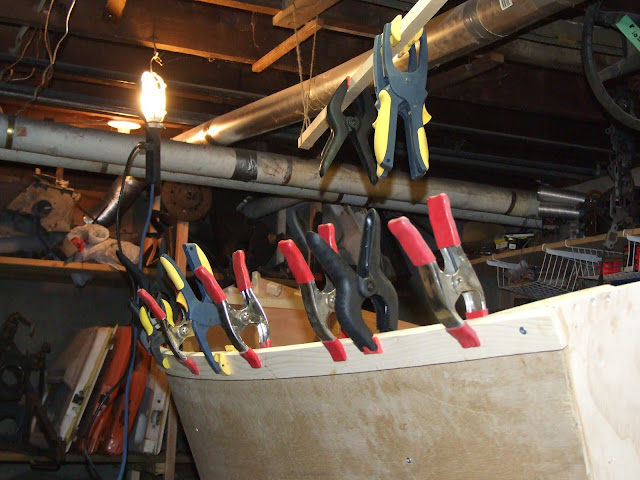 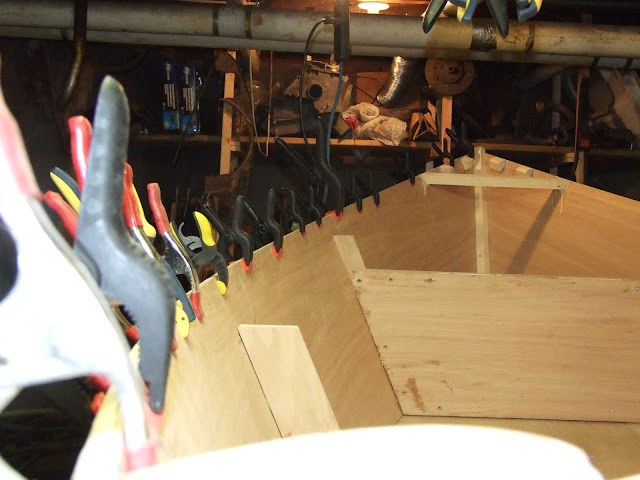 I figured would quit on a high note (and I am out of clamps), so I will get the starboard gunwale on tomorrow.

I had to buy the wood for the gunwales, and 1x3s for the frames, and I bought a bag of spring clamps ( As a thoracic surgeon once told me, you can never have too many clamps... and always make sure you have the same number after you close the chest as you did before,) so add another $44.56 to the total. ( Deduct $17.80 of that for the clamps, if you are just tracking the material cost.) Time for a beer.

It ain't finished yet, I still have lots of time to screw up and turn it into kindling. The upside is that it has kept me from getting even crazier than usual during the on-the-hard months.


Hours 11-17: Got the starboard gunwale installed, but didn't take a pic because it looks exactly like the port gunwale except backwards. For those of you following along at home who want the full effect, scroll back up to the port gunwale pics, and look at them using a mirror. With that quickly out of the way I set to work bulking up the midframe. The midframe thwart is critical, as it provides most of the support for the seats while rowing, I used a scrap of 3/4" marine ply in the center and 1 x3s to run from chine to chine: 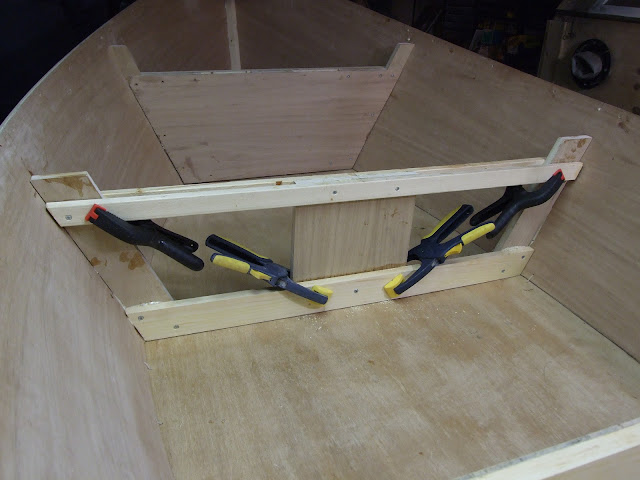 Now that I had support for the seats in the middle, I needed to actually build some seats. I ripped some of the offcut 1/4" luan into strips and laminated them together into four 1/2" thick slats, reinforced underneath by lengths of 1" x1". This will all be glassed and epoxy coated when I get to that stage. 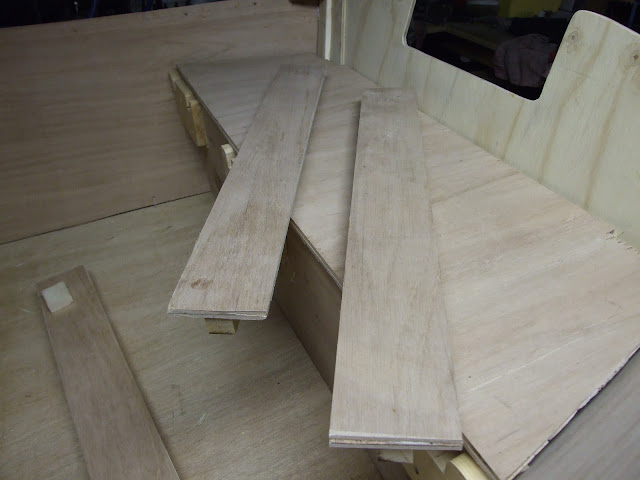 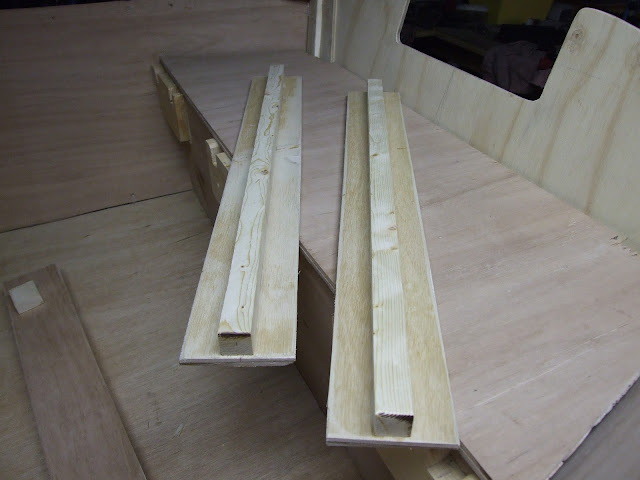 And I continued burning through the last of the two sheets of luan I bought, and built the top of the stern seat box: 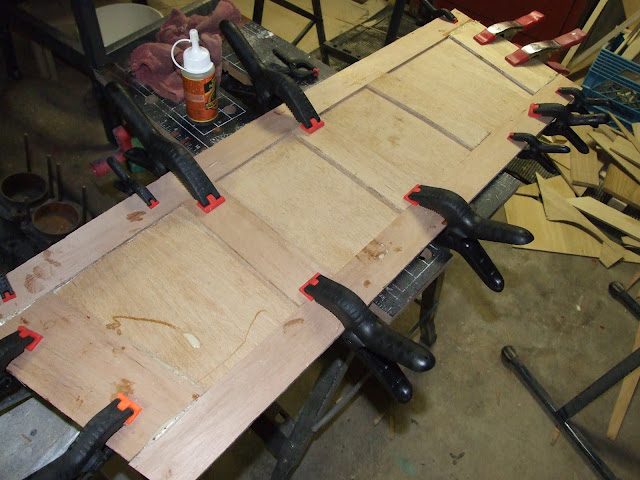 I flipped it over and fitted it... 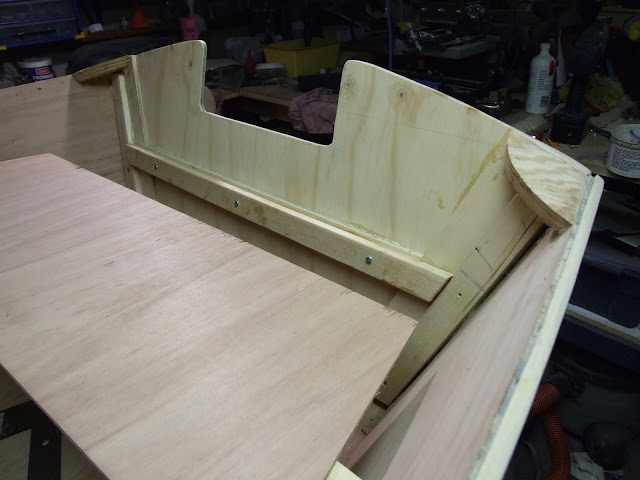 ...then realized I had some fidgety cutting and measuring to do. Or measuring and cutting, depending upon your desired results. So, rather than doing the math, I cheated. I grabbed my pattern gauge... 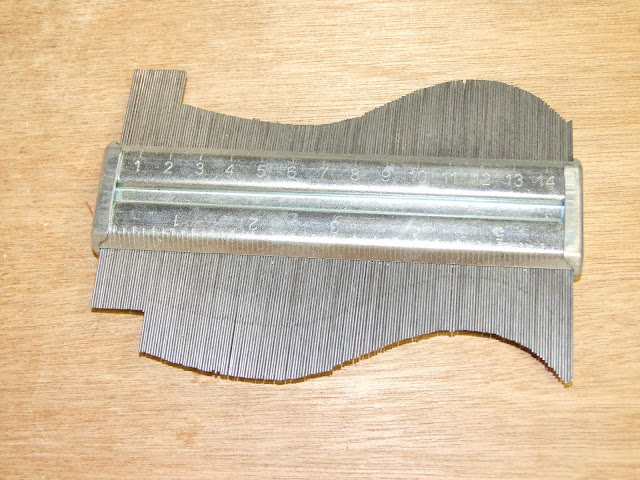 ... pressed it into the corners where the transom and seat meet, and traced the result onto the seat, then cut. 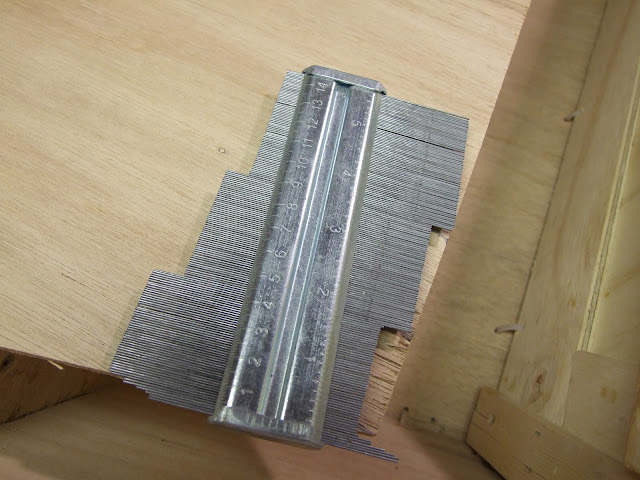 While I was waiting for the glue to dry on the stern seat blank, I bought some lengths of 1 x 4 to build the various cleats the hull needed. (Quick low-buck tip: think about the lengths of the pieces you need. Sometimes buying shorter pieces is cheaper than buying the same length of material in longer lengths. For example, I bought 4 4 foot long 1 x 4s at $2.77 each, which was 20% than the price of buying two 8 foot lengths.) I did some quick figuring, warmed up my saw and started cutting. Cut, cut, cut, screw, screw screw, glue, glue, glue, and the seat cleats are installed and the stern seat dry- fitted. The stern seat will not be fastened until I have filleted and taped the bilge. 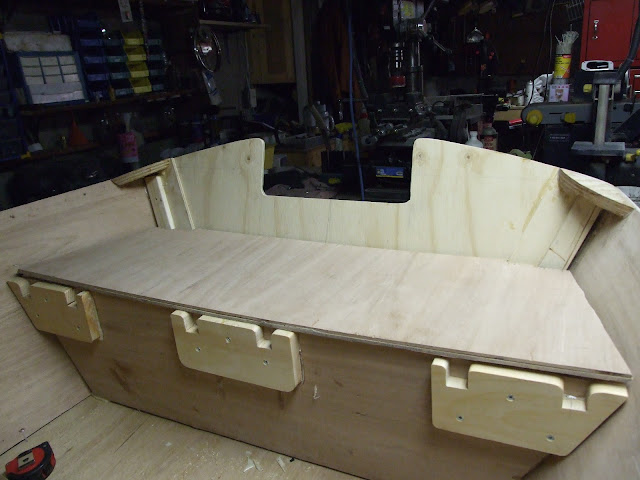 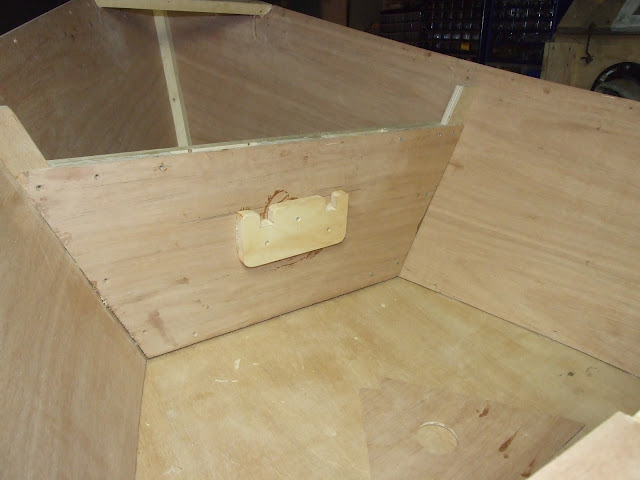 This is how the seat slats fit: When rowing the seats run down the center of the hull from stem to stern, rather than the more traditional athwartship design. I did this for a couple of reasons: 1) It allows for the rower to move forward or aft to accomodate changes in center of gravity due to load out of payload or passengers, and 2) it allows some flexibility in centerboard placement, if I decide to go that way. 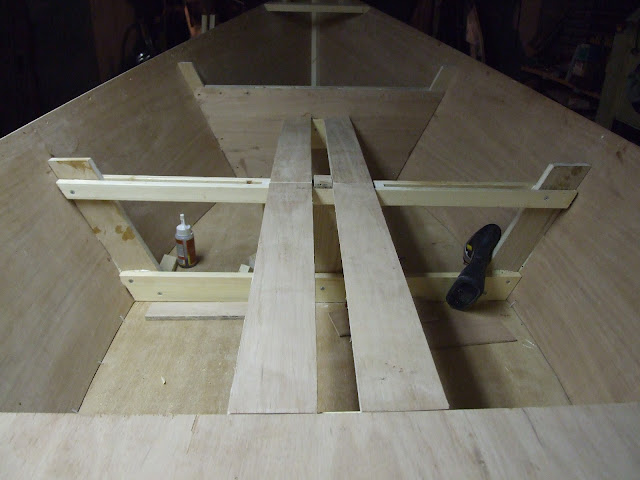 When sailing or motoring, reposition the slats like so: 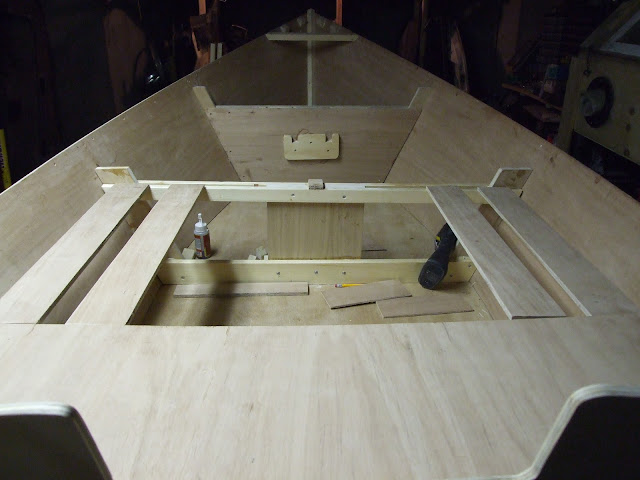 Next, I need to finish installing the thwart outboard seat cleats, build some oarlock cleats and deck in the bow. Then, it is sealing time.

For those keeping score, here's the current build cost: