"But I can live and breathe and see the sun in wintertime..."
-Big Country

When I started scribbling this (mostly) non-fictional account of doings on the Dock, I figured the Chronicles might be a way for the Docksters to keep in touch during the off-season,  keep up on local gossip while the boats are hull-wet and document our refit projects throughout the year.   In the interest of getting some feedback and connecting with other local sailors, I flogged my shiny new blog on  www.sailnet.com , www.anything-sailing.com , www.cruisersforum.com , and www.sailboatowners.com , forums that I have haunted for the last few years, picking up and throwing out advice and information.  My thinking was that if a half dozen or so of the folks on and near the Dock read what I wrote and added their own contributions, then  the Dock Six Chronicles would  be doing what I expected when I came up with this brainfart.
Well, here we are, a month into this trainwreck, and the results are in:
More than 3000 page views!
THREE.   UNPRINTABLE.  THOUSAND.
Wow.
The adventures of Gavin and Sylvia and Jack and Jim and Jim and James and Maryanne and Brooke and Jill and Steve and Jordan and Bas and Inky and Finn and George and SWMBO and me and all the rest have been read by people in the United States (our biggest audience), Canada, the UK, Australia, Portugal, Brazil, Mexico, Germany, Russia (!), Norway (?) and Guam (!!??!!)  to name the top Ten.
How cool is that?
This Rebecca Black-like instant popularity has presented a challenge, however- context.  Or, more accurately, lack thereof.  See, I figured I was writing largely for an audience who knew what and where Port Dover was, and understood the basics about , or at least the in general.  As it turns out, apparently Port Dover, , , and for that matter are largely unknown quantities in .
So, in the interest of desperately holding onto our audience, this would be a good time to take a break from plot development and focus on fleshing out the setting of this saga.
There seems to be something about the extreme southern regions of every country that makes them a little different from the rest of the surrounding nation. The Riviera is nothing like Normandy, Brixham isn't Cambridge, Melbourne's not Sidney and New Orleans sure as hell ain't Kansas, Toto.
I am not going to theorize on the reasons why this downward-bound eccentricity occurs, I just know that it seems to hold true.  Maybe it isn't a matter of direction as much as it is proximity to a large body of water, but if it was only water, Baffin Island would be much more interesting than it actually is.  So, it seems like the "south" part is an integral component of this spell.  Adding more empirical evidence to this theory is the fact that Norfolk County is not like any other place in Canada.
Norfolk County is on the South Coast of Ontario, which puts it on the North shore of Lake Erie.  "Lake" is a misnomer.  At almost 26 000 square kilometers, Lake Erie  is more accurately a freshwater sea.  In fact, as seas go, Erie is a contender.
The Dead Sea is smaller.
The Aral Sea is smaller.
The Chesapeake Bay is smaller
Long Island Sound is smaller. 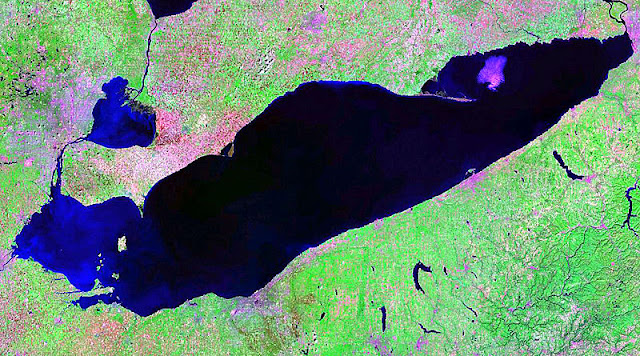 Here's the Lake from space, courtesy of NASA.
As much as Erie could be considered a sea, an argument could also be made that the lake is simply an extraordinarily large pond.  What bragging rights Erie claims in area, she gives up in volume- the Lake is the shallowest Great Lake, with a maximum depth of 210 feet and an average depth of 62 feet. 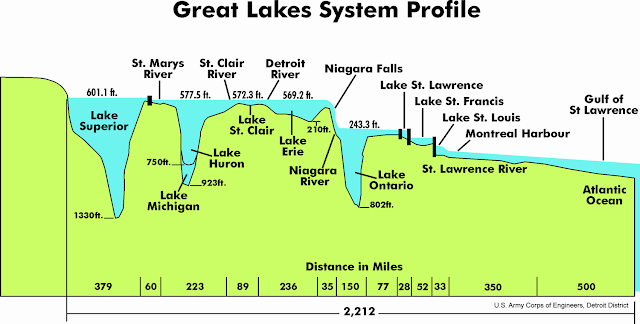 All that area and so little depth is some nasty math.  Storms roll in quickly, and  the waves are like ex-wives- square and mean. Prolonged winds will cause the whole lake to move, resulting in water level fluctuations measured in metres over less than a half day.  Over the last four centuries, Erie's furious weather has accounted for hundreds of shipwrecks. 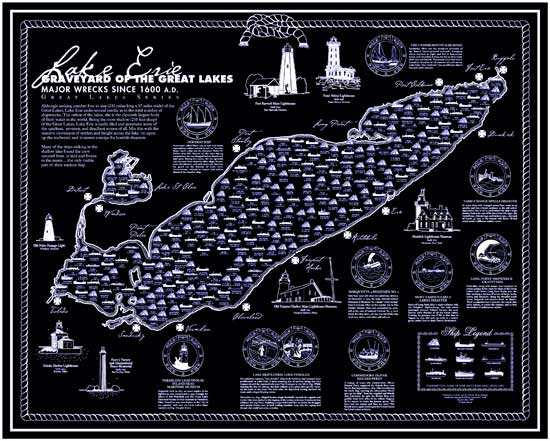 Image courtesy of www.lakesuperior.com
Posted by Dock Six Chronicles at 01:06