From the Outer banks to the Grand Banks, Irene is going to make her mark.  Landfall looks to be in the area of Orient, North Carolina, home to one of the largest concentrations of  boats on the East Coast. Storm surge is predicted to be up to 12 feet in some areas.

That storm surge has many Mid-Atlantic sailors nervous, with good reason.  On an individual level, a boat secured to pilings that end 8 feet above high tide  is going to be in trouble if it has to lift 12 feet.  In the big picture, that kind of surge will cause widespread flooding that makes any damage caused to your boat seem inconsequential compared to the damage done to your home, and your community.  That means that some skippers in the path of this witch have had to make a difficult choice- move the boat to a more sheltered hurricane hole or pull the boat out, strip the canvas and sails, or concentrate on prepping the house, or try to do a little of both?


Perhaps the best indicator of the storm nastiness level of Irene is this little nugget of storm news:  Atlantic City is closing casinos ahead of the storm's arrival.

Closed casinos- if that isn't a sign of big trouble, nothing is.

My storm adventure Wednesday night looks like a sunshower by comparison.

To all of our East Coast readers, be safe. Here on the Dock, our thoughts are with you.

Email ThisBlogThis!Share to TwitterShare to FacebookShare to Pinterest
Labels: weather

At 11 am, the Dock was more than a foot higher than normal, as the wind and waves tried to jam as much of the bay into the marina as possible.  Whisper, a CS 30 on Dock 3 had already surrendered her jib to the wind. 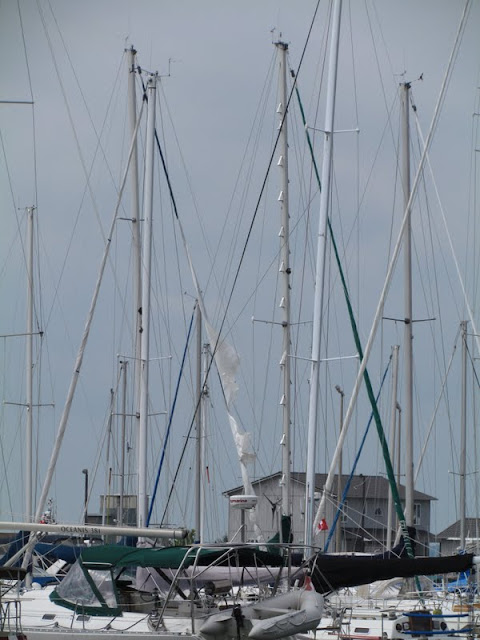 Conditions improved late in the afternoon, but by the wheels were coming off again.  While SWMBO and the dogs spend the night at stately Jones manor, I have decided to ride out the weather on the Dock.  I've added another dockline to the pontoon boat adjacent to Legacy's slip, thankful  that our wooden guest boat is not in the water (as yet) this season.  She's ready to splash, but I need to put the arm on somebody  (ahem, little bro?) with a truck that can haul her, and with a pontoon boat stretching her docklines until she is damn near taking up both slips, i don't mind that she has missed this opportunity to have her shiny new topsides "christened"...even thought it's cost me  my honour and $20 to James and Mark for missing a wagered splash date.
As I write this, the wind is picking back up, the sky is starless, we're tossing around pretty good at the Dock, and I can hear rain pattering on the dodger, but all the boats are safe and I'm snug in the cabin  with a cold beer and a good wi-fi signal.
There are worse ways and places to ride out a storm.
Thanks for taking the time to check us out.  Please feel free to "Talk the Dock!"  Link us, follow us, or just tell your friends.
Posted by Dock Six Chronicles at 21:06 No comments:


Easy, tasty, presentable and cheap.  On the Dock, this is how we like our meals...

(Oooooooooohhh, I am in SO much trouble.)


A dessert that has gotten rave reviews is something we call Cabo Crepes. 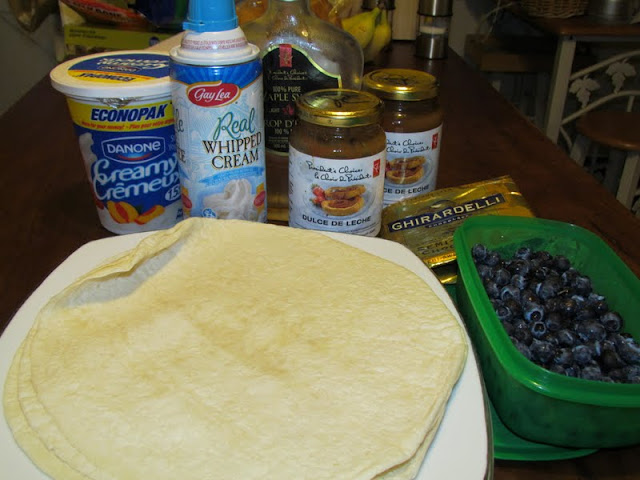 Blueberries or strawberries
melt a spoon of butter in a largish pan, and warm tortilla on both sides.  slather warm tortilla with dulce de leche  and/or, optionally, Nutella.  Roll tortilla.  garnish with whipped cream and grated dark chocolate.  Put two on each plate.   Artfully arrange berries on plate.   Mix yogurt and maple syrup 3:1 garnish with cinnamon and serve in small dish for dipping.  Serves two. 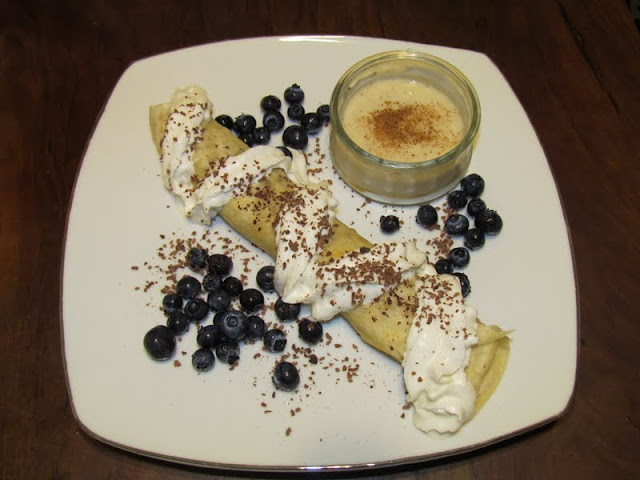 Yes, I know there is only one Cabo Crepe on the above plate.
I was on a diet.
Really.
Thanks for taking the time to check us out.  Please feel free to "Talk the Dock!"  Link us, follow us, or just tell your friends.
Posted by Dock Six Chronicles at 20:18 2 comments:

Email ThisBlogThis!Share to TwitterShare to FacebookShare to Pinterest
Labels: Food

"Lookin' for my lost shaker of salt..."
-Jimmy Buffett


It's become ritual, and the ritual has become more elaborate throughout the season. The  Insitgator and Wheelin'  salute the sunset. 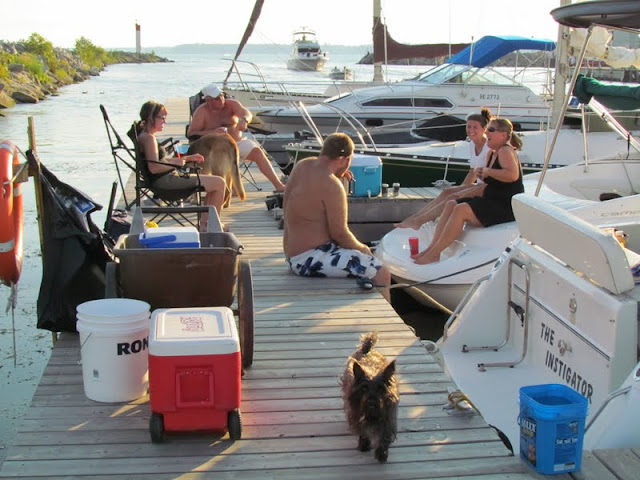 Note that this is not the same The Instigator as seen in a previous post about The Insitgator.  James has a new boat. 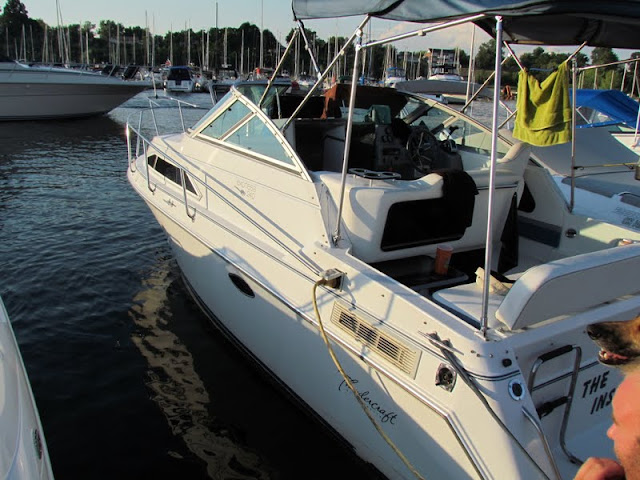 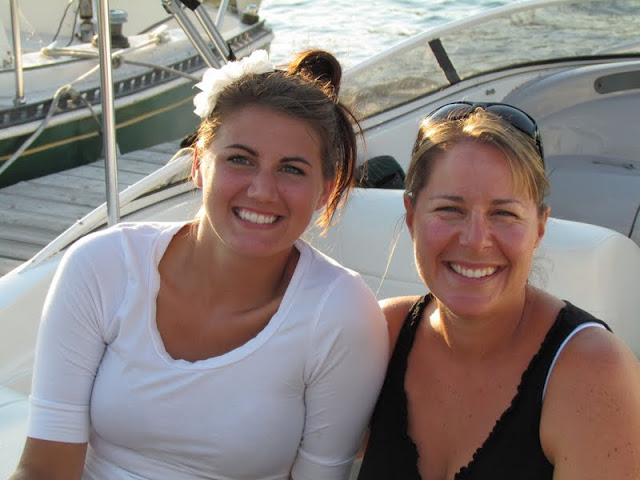 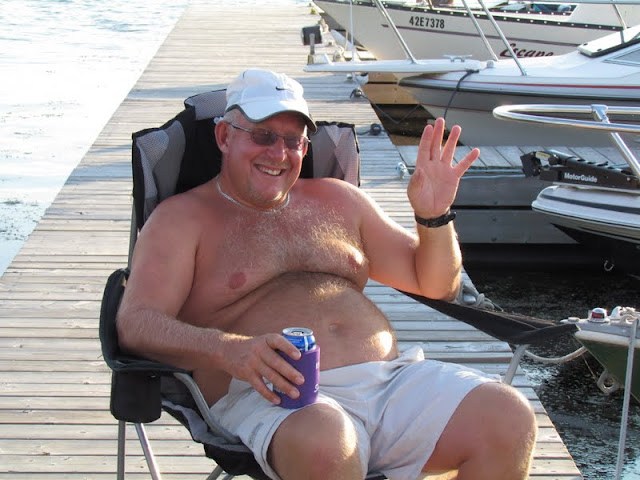 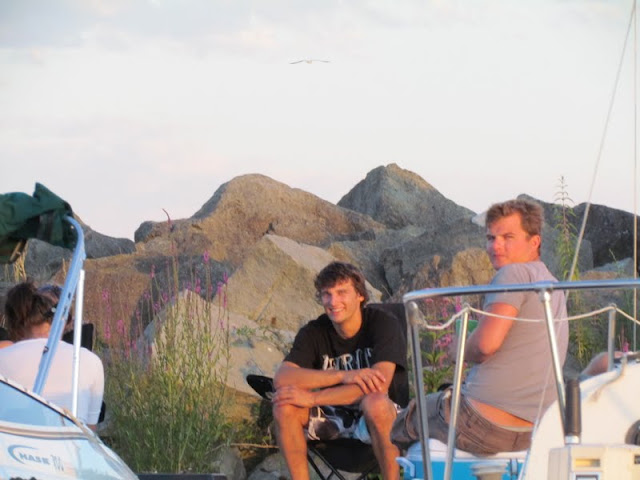 James, a few drinks in. 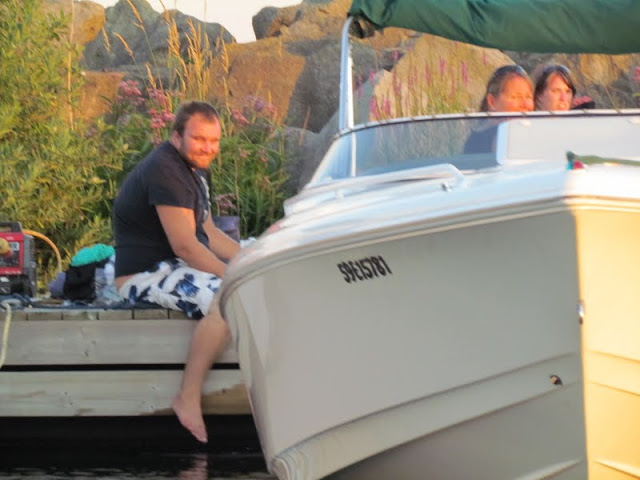 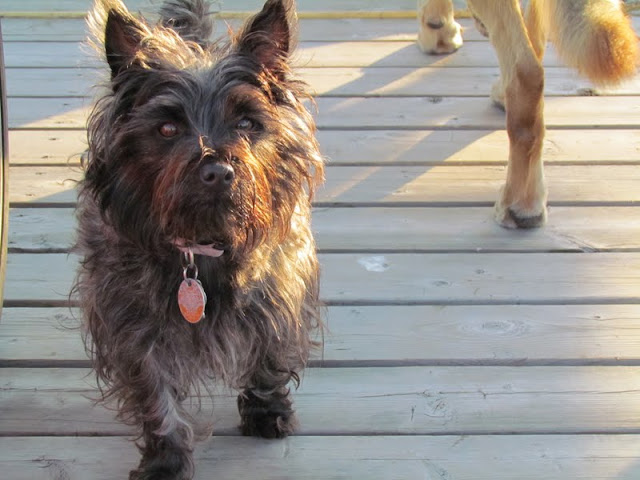 Thanks for checking us out.  Feel free to "Talk the Dock!"  Link us, follow us, or just tell your friends.
Posted by Dock Six Chronicles at 09:06 No comments:

"All my tubes and wires, and careful notes..."
-Thomas Dolby


Pop quiz, hotshot:
You have a dinghy.
You need an outboard.
You've got $200 to spend.
Gas or electric?  What do you do?

Here on the Dock, we attempt to answer that question.

Our new motto:  Dock Six Chronicles:-We do the trivial, virtually meaningless research, so you don't have to.

We do it all for you, demanding bast faithful reader.

What is important in a dinghy OB?

Speed- If it ain't faster than rowing, you might as well row.
Range- If you can't get there and back, it is worse than not getting there.
Weight- The more your OB weighs, the less beer you can haul back to the boat.  Or water.  Or food.
Ease of operation- Dock Six is all about everything but work, so if an OB is a PITA to run, it ain't fun.
Features: Cool stuff is just, well, cool.  Or stuff that makes things better is just, er better.  Whatever.
Ready-to-Run Cost: Low-Buck.  South of $200.  All in.

Now that we know what needs to be tested, the appropriate testing apparatus must be assembled on the Dock. 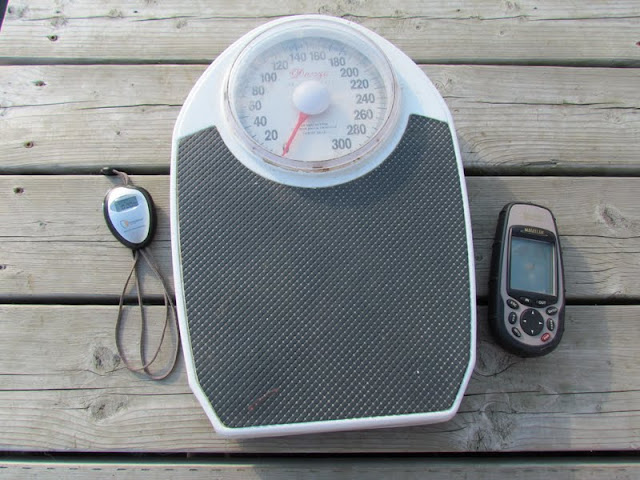 
Quack, our 6.5' inflatable,  was washed, waxed, and pressed into service as a test bed. 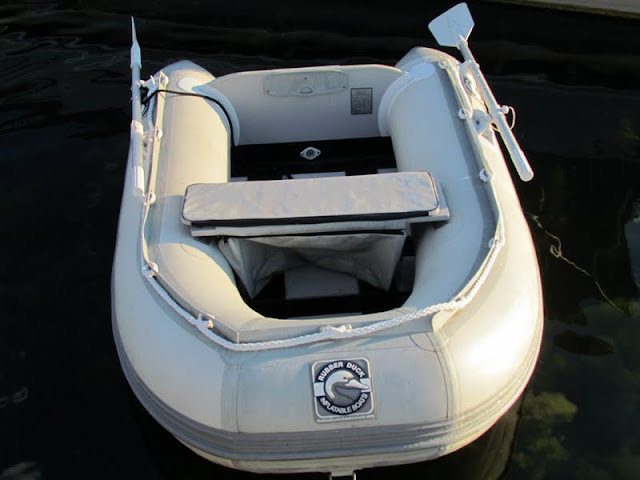 Note the emergency propulsion devices (oars) prudently retained for the duration of this shoot-out.  Low-Buck occasionally means Low-Luck, but never Low-IQ. I may be dumb, but I ain't stupid.

I volunteered as test pilot, with SWMBO handling timing and recording duties.

Saturday night's conditions were lousy sailing weather but great testing weather- no wind and flat seas.  It's on.

So, with no further ado, let's meet our contestants: 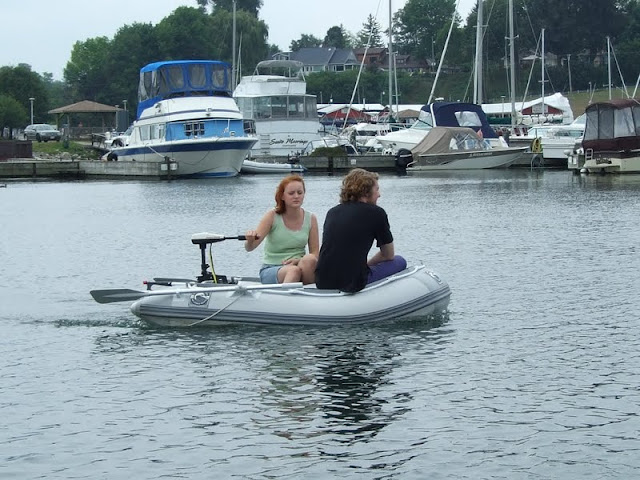 Ably demonstrated by our spokesmodel spawn, Abbey and Sam. 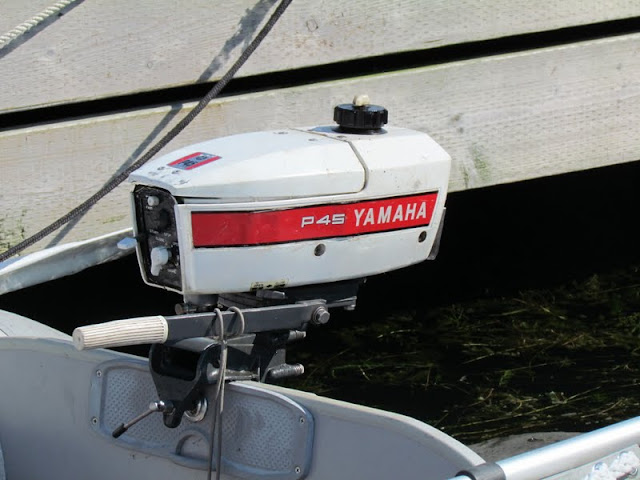 Quack has a rated payload of 495 lbs.  The more weight that propulsion eats up, the lower the usable load.
Determining ready-to-go weight of the Yamaha outboard was easy.  I filled the onboard tank, plopped it on the scale and read the number:
Ready-to-use weight:   22.5 lbs.

The Minn Kota was not so easy.  I had to weigh the motor.  And the battery.   And the battery box..  Easiest way ot do that was to use my Low-Buck Trolling Motor/Battery Rack/Dolly (pat. pend.)  aka a folding luggage trolley.  After determining the weight of the trolley, I loaded the whole shebang onto the scale. 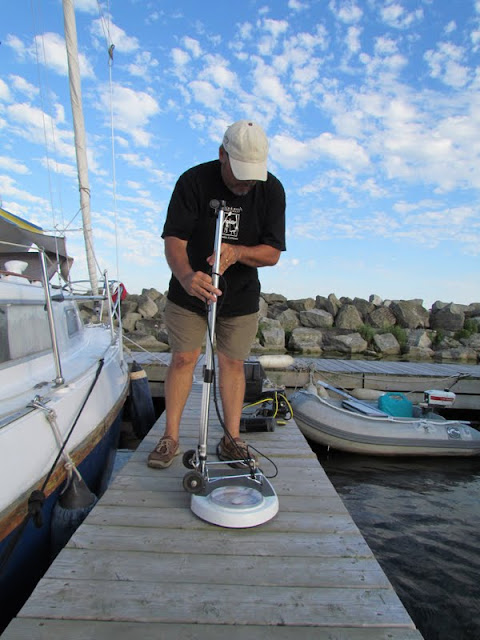 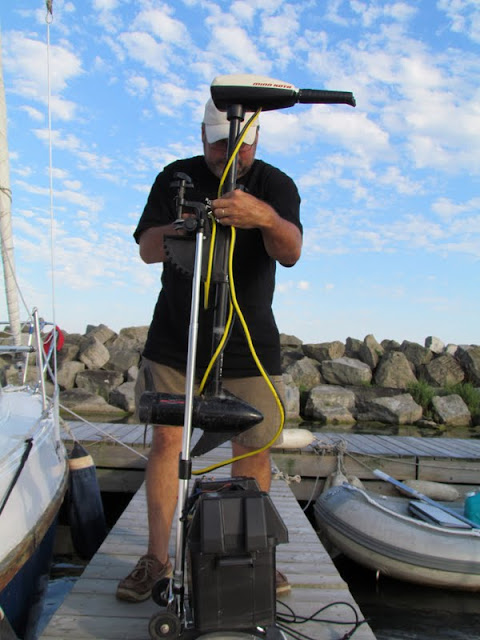 And recorded the number, then subtracted the weight of the trolley.  Fancy footwork optional. 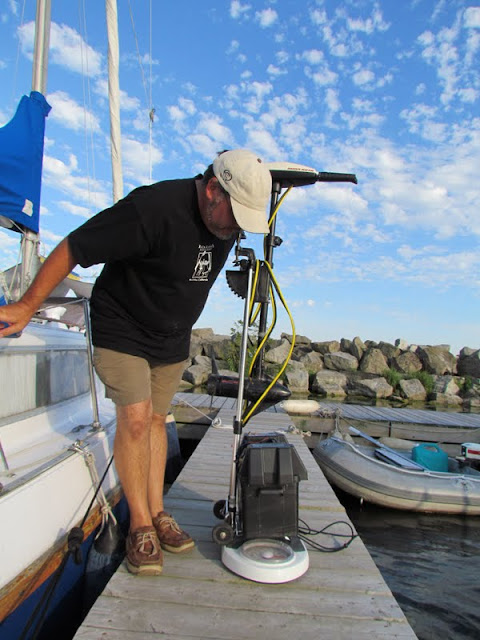 
It doesn't get much more user-friendly than the Minn Kota.... at least initially.  Clamber aboard, twist the tiller- mounted throttle, and off you go.    However, it's large, slow rotating prop occasionally had trouble with the heavy weeds encountered in our marina, killing the motor at random.  Luckily, the motor is easy to tilt to reach the prop to clear the offending flora.

The Yamaha is an old-school engine, with a "wrap-and-rip" separate starting cord, a choke, and an adjustable throtttle mounted on the motor.   It would be daunting for a novice, but thankfully the starting instructions are printed on the flip-top that conceals the flywheel. 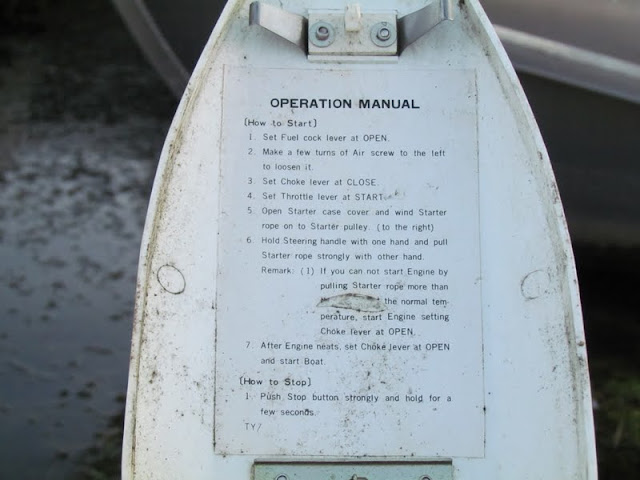 The only instruction missing is to ensure that the vent is open on the gas cap.  This makes the difference between starting the motor in one pull of the cord...  or 20 pulls.


Time to dust off my hand-held GPS .  Only one problem- the "hand-held" part.  With one hand on the tiller and one hand on the camera, I am outta hands.   A repurposed lanyard and a judicious application of electrical tape solves the problem. 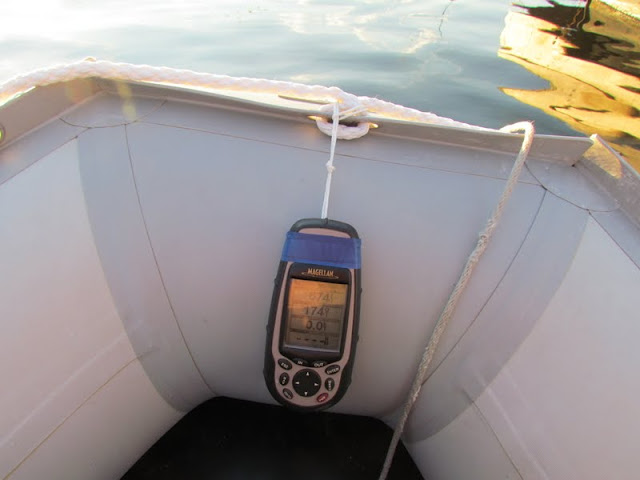 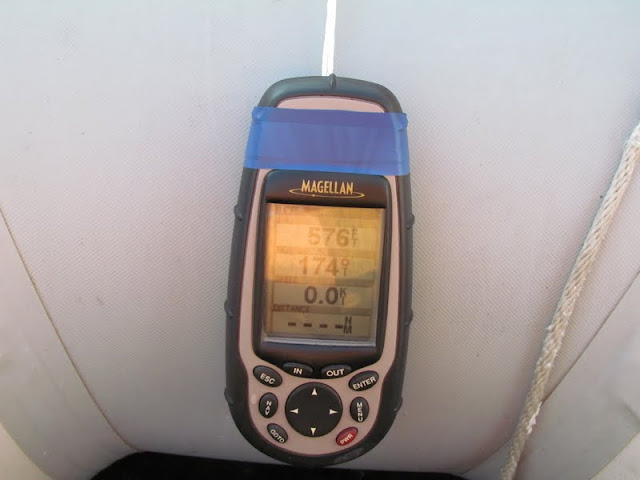 First up, the Minn Kota.  I quickly twist the tiller through the four forward speeds and plateau.  After a five count with no change in numbers on the screen, I snap a shot of  the top speed... 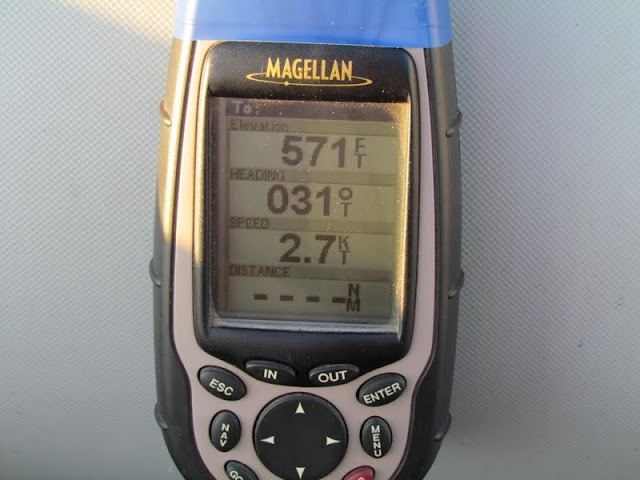 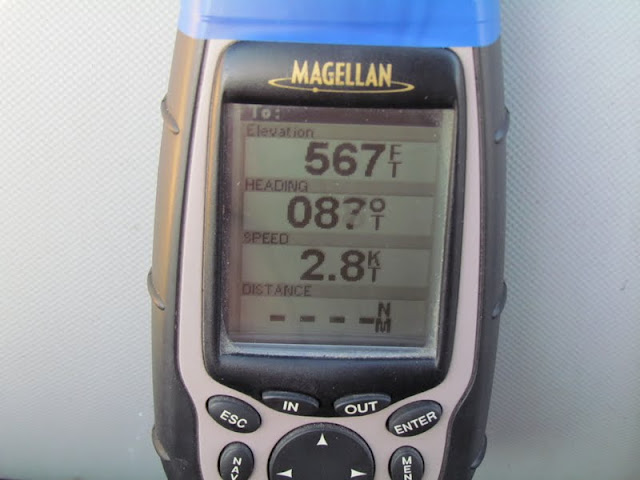 Another tenth of a knot!  Woo-hoo!


Now it's time to crank up the Yamaha and see what it's got. 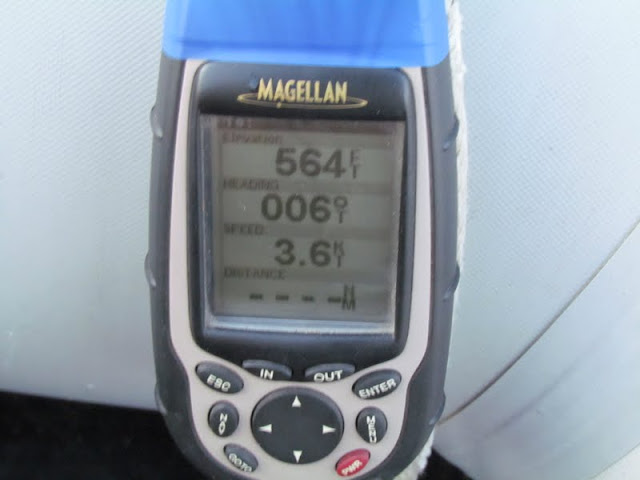 With a little fiddling with the choke, even more... 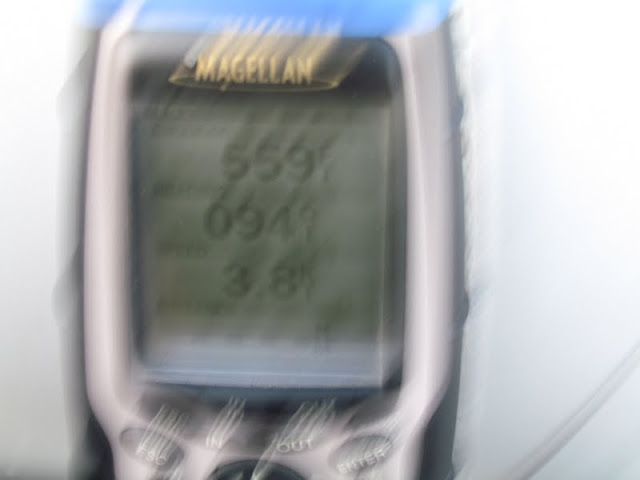 But it gets buzzy, which makes the camera fuzzy.


From our secret testing lab on the cloaked Dock Six, it was a race against the clock through the fairways between Docks 1 and 2, 2 and 3, and 3 and 4, with a dash toward the gas dock, looping back to Dock Six. 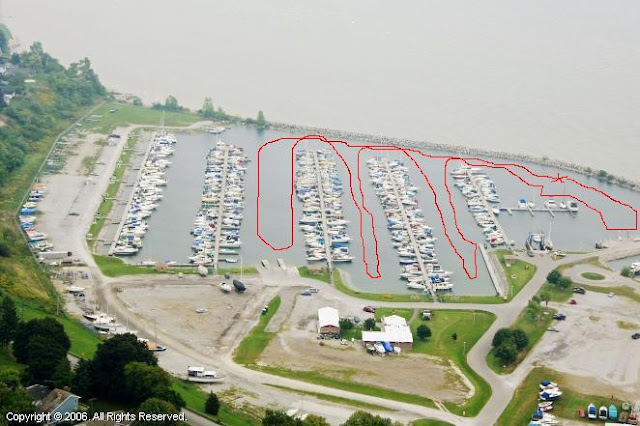 Best time, from a standing start with a cold motor, wins.

SWMBO was on the stopwatch, and she was cutting me NO slack.  Remember that vent on the gas cap?  I didn't.  If I had, it would have shaved at least 2 minutes off the Yamaha's time.


At the conclusion of the marina lap, I measured how much fuel remained.

Minn Kota:    As I was returning to the Dock on the last leg of the lap, I noticed that the Minn Kota had slowed significantly.  After peaking early in the lap with a top speed of 2.8 knots, by the time I was approaching the launch ramp, maximum sustained speed was 2.3 and dropping.  By the return leg from the gas dock, Quack was wallowing along at 1.3 knots.  The battery was seriously drained, down to less than half capacity, according to the volt meter on the battery box.


The Minn Kota is the clear winner for one simple reason- Reverse.  In fact not just one, but TWO reverse speeds.  The Yamaha had none.  Sure, the Yamaha could pivot 360 degrees with a flippy-floppy tiller, but with no neutral, it could be a little disconcerting in tight quarters.  The Minn Kota's telescoping tiller,  multi-position tilt, and the adjustable shaft height,  make for a very flexible and user-friendly power unit.

Right then, time to have a beer and tabulate the results:

Out of 6 categories, the Minn Kota won 2- Features and Ease of Operation.  The Yamaha won the other 4, making it clear.


I hope you check in for more upcoming thrilling product testing,  like the Vise-Grips VS. Leatherman Challenge  and the   Figure 8 - Granny  Stopper Knot Showdown.

Thanks for taking the time to check us out.  Please feel free to "Talk The Dock!"

Posted by Dock Six Chronicles at 15:50 No comments: