"A bad day's when I lie in bed, and think about things that might have been..."
-Paul Simon


Way back in the day, when a front-loading four- head VCR was top-line home theater, everybody had a Maxell dude-in-the-armchair poster on their wall, and a subwoofer was my buddy Mike who could snarf down a foot- long hoagie in under 1:40, our planet had a circumference of around 24900 miles.
Today, an equatorial lap is about the same distance, but this week I was reminded again how the interweb has made the planet seem a whole lot smaller. Here's what I mean:

I used to participate at http://www.cruisersforum.com, but stopped a few months back.  I was prompted to revisit the site recently, and stumbled upon a thread requesting info on transiting the Welland Canal.  The poster mentioned that he had bought a boat in Port Dover and was sailing it back to Picton, on Lake Ontario, this weekend. I sent the OP (original poster), Bill, a message explaining that I lived in the area, and that if he needed anything to get in touch.

Today, I got a phone call:
"Hello?"
"Dude! This is so cool!  I always read your blog!When I pulled into the marina and saw that breakwall, I said, 'Hey, that's Dock Six!'"
"Thanks," (pause.)  "Who is this?"
"Bill!"
"Bill?"
Then all the pieces fell into place.  THIS is the guy from the Cruisers Forum!..."Oh, okay, THAT Bill!"
A half hour later Finn the Wonder Dawg and I caught up with Bill and Hugh at the marina, as Bill was prepping his new-to-him Grampian 26 for splash.

Hugh is on the left, Bill on the right, gripping Canada's #1 meet-and-greet ice breakers.  Show up with Timmies and you've got new friends, no matter how big an asshole you are. 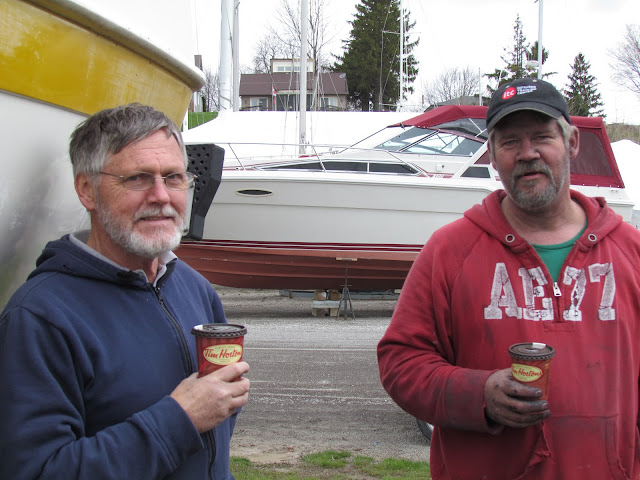 Bill grew up sailing.  He raced, he cruised, he sailed Mirage 24s with his dad,, Northern 25s, 29s, raced a Bombardier 7.5 meter, then moved to Texas for a while.  When he moved back, he bought a powerboat, then a Hughes 25.  Craving a little more room than the Hughes provided, he was advised to seek out a Grampian 26.
Enter Hugh.
Hugh had reluctantly listed his Grampian 26, Suntack,  for sale. Bill and Hugh came to a meeting of the minds, and Hugh agreed to pass  command of Suntack to Bill... but not without one last sail.  Bill will be sailing single-handed from Port Dover to Port Colborne, where Hugh will step aboard Suntack one last time to assist Bill in travelling through the Welland Canal. 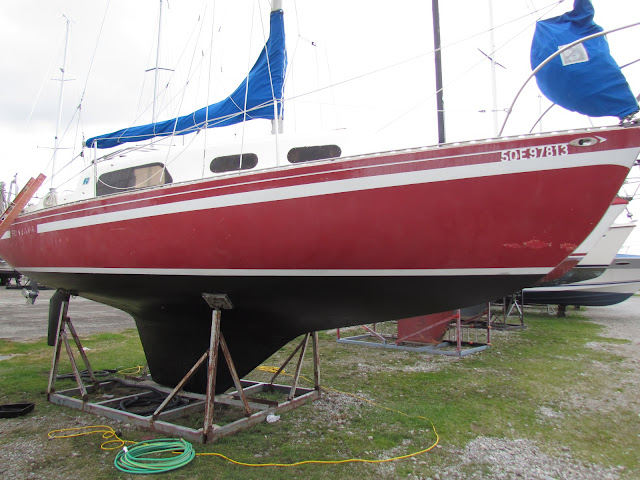 I hung around and snapped pictures and offered unneeded advice while Danny and his helper worked magic with the Travelift: 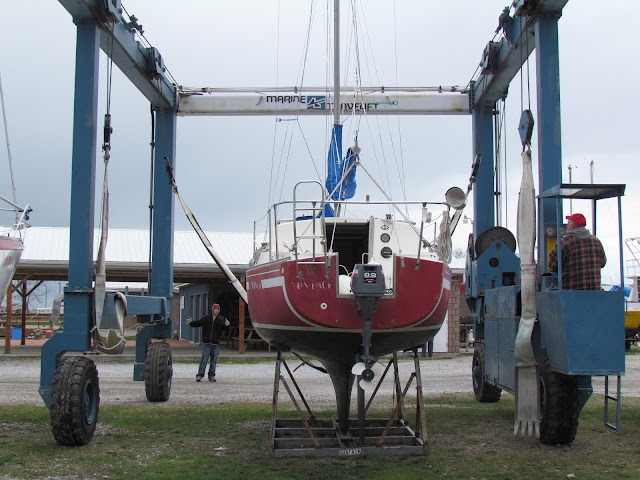 ...and Bill finished the bottom paint... 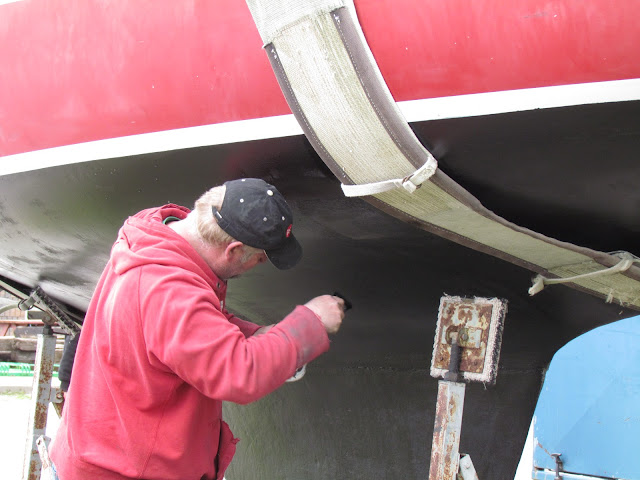 Then Danny took Suntack on one last tour of the marina... 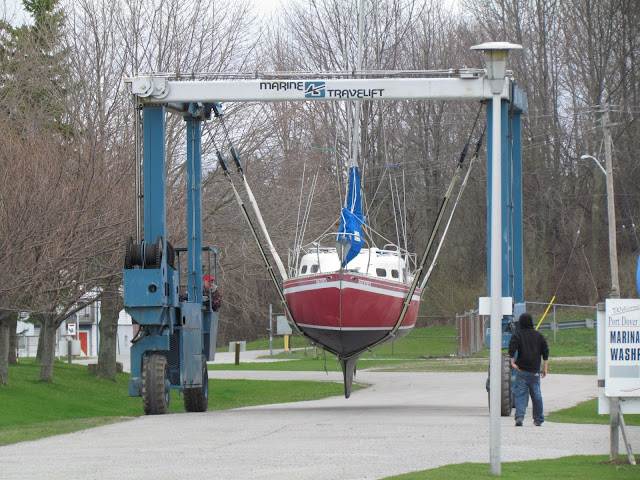 ...before splashing her in the basin... 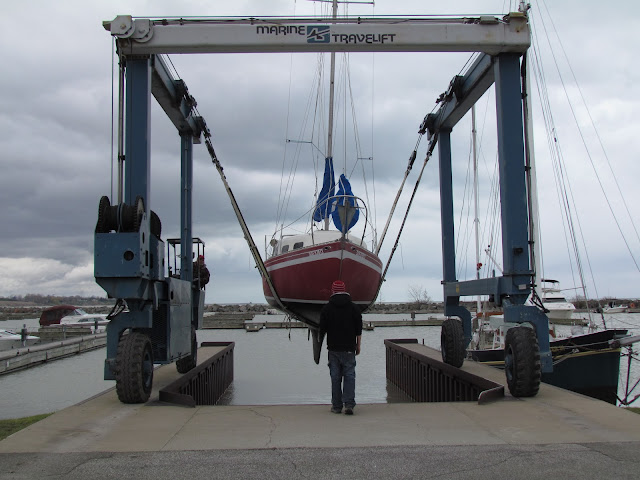 ... where Hugh and Bill climbed aboard to guide her over to the transient dock for her last night in Port Dover. 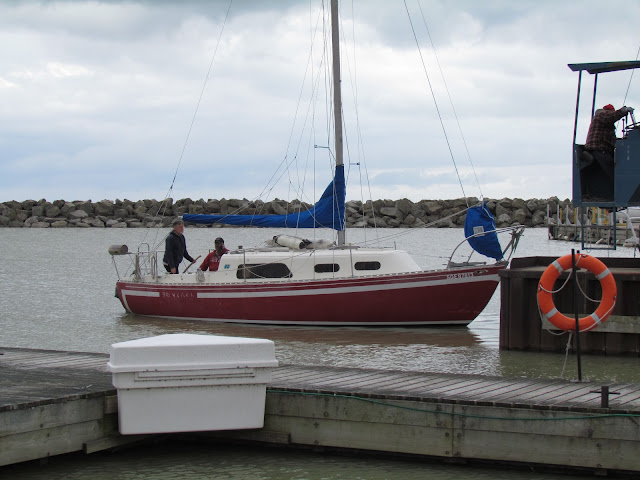 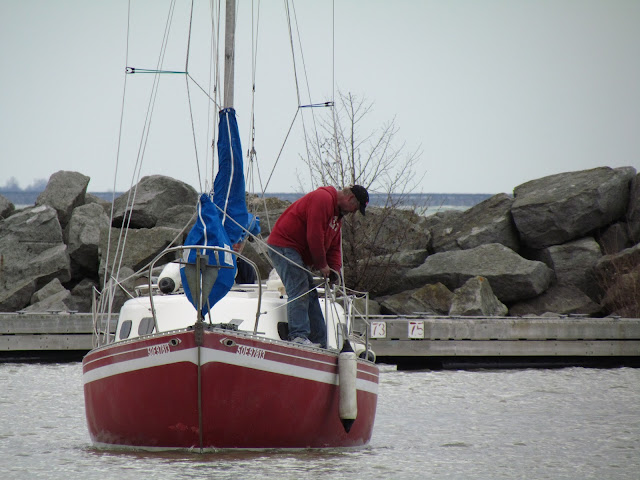 Bill expects to depart at first light Saturday morning.  he's got a long day ahead to get to Port Colborne.


So, in a nutshell, a guy from Dock Six, prompted by a message from a grieving American naval architect on an American based website, visits another American website and stumbles on a message from a Canadian  Lake Ontario sailor who has bought a boat in Port Dover advertised on an international listing site. Try THAT with a CB radio and a typewriter.

The third rock from the sun maybe the same size as ever, but it's gotten a lot smaller.

Hugh, you're always welcome to join us on the Dock anytime.  Bring your dog, we'll provide the rum and the boats.  Deal?

As always, folks, thanks for taking the time to check us out.  Please fell free to "Talk the Dock!"  Follow us, link us, or just tell your friends.
Posted by Dock Six Chronicles at 00:08