"Back and forth we sway, like branches in a storm..."
-Maroon Five

As we have learned in our seasons aboard Whiskeyjack, the more time you spend on the water, the more comfortable you become on the water.  Wind and waves that would have held us to the dock  in the past are now beckoning us to come out and play!

Sunday dawned cloudy and damp.  An apathetic rain fell through most of the morning, with a listless wind out of the west that was just strong enough to propel the stench of a floating and bloating carp corpse  from two slips away across our cockpit... and breakfast.   Boathook-aided strategic repositioning of offending offal  improved breakfast (sorry about your new slipmate, James...really.  Honest.  Heh-heh.) but didn't do a damn thing for the weather.

It's a good morning to curl up in the nap station with a book and a cup of coffee.  Which we did.

By noon, things were looking brighter... literally.  The rain had stopped, and the sun had begun to poke through the clouds.  The wind was also picking up, and clocking around.  SWMBO and I decided to go out and raise some sail.

As we left the marina, the waves were about 3', just shy of whitecaps, and the breeze was freshening.  Logy from our lazy morning, we decided we didn't want to work too hard, so after passing by the beach to see how the other half lived and exercise the diesel we raised the main and left the jib furled.
By the time we were a mile out,  the waves had calmed some, and so had the wind.

We spent the early part of the afternoon tacking across the bay, and keeping out of the way of those who were in a hurry. 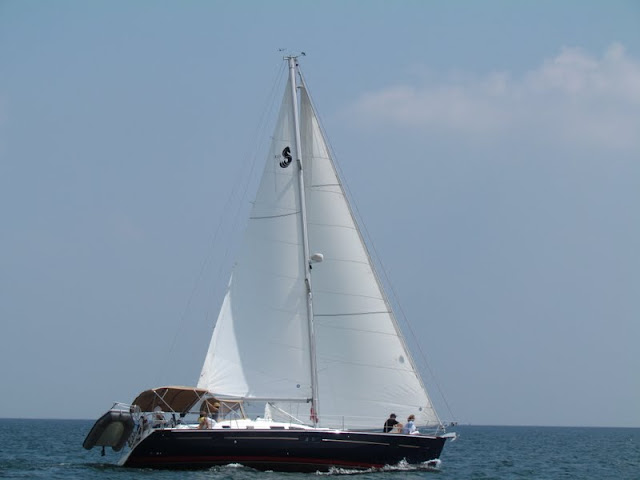 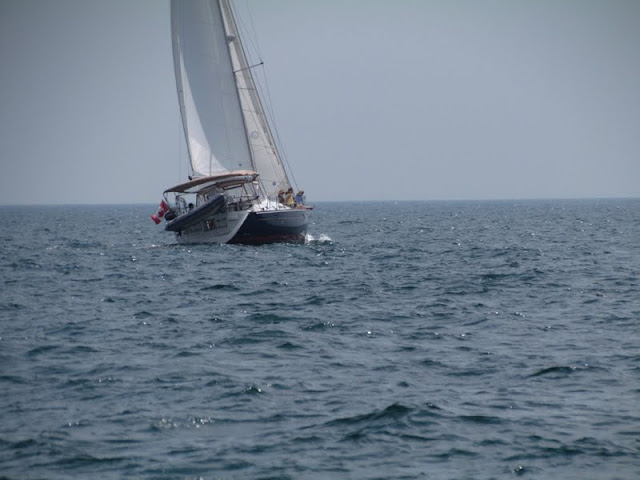 About 3 o'clock the wind began to pick up and the waves sharpened. Noone will ever confuse Whiskeyjack with a race boat, but she was happy to lift her skirt and boogie today! 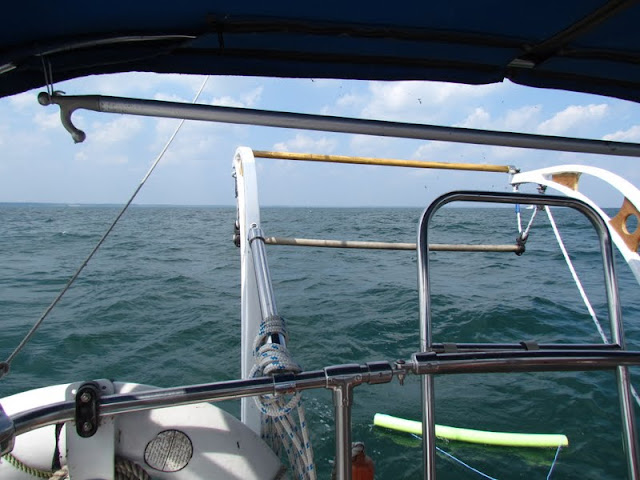 Note the swim noodle- SWMBO was going to jump in and cool off, and between the time the PITA noodle was deployed and she was about to jump ship, the waves put on their whitecaps and the wind showed up. 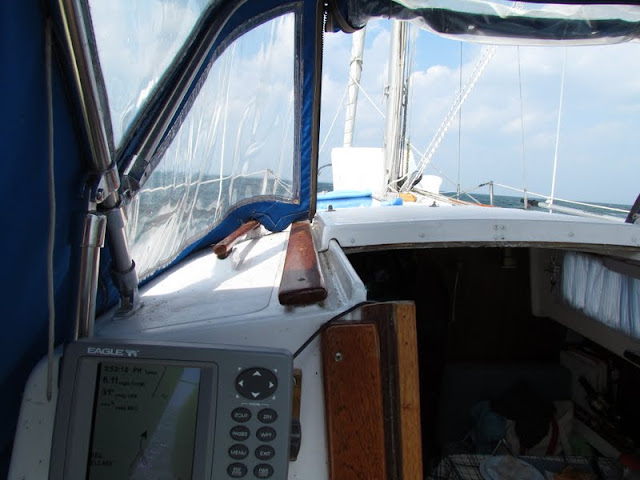 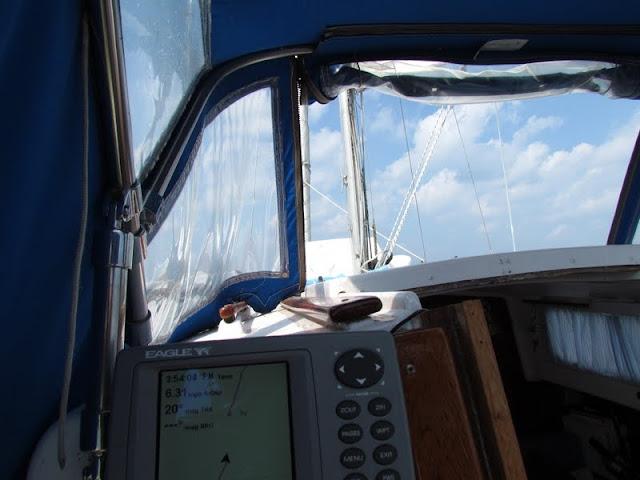 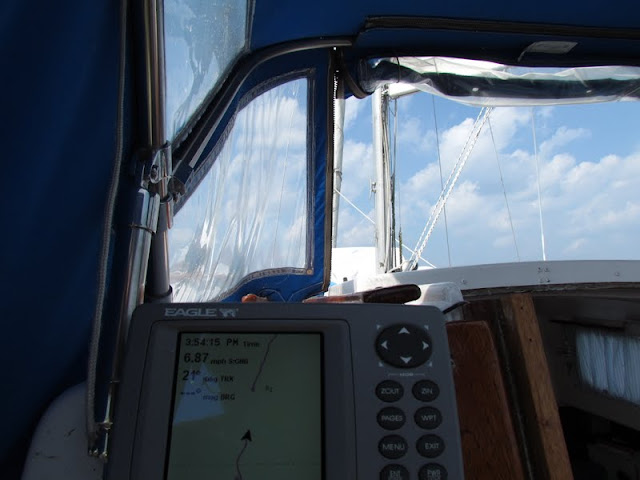 The numbers tell the tale-  hull speed +  under main only.

Jack doesn't have a chart plotter (or a knot meter or a depth gauge)- he does have a straw hat.  No technology and straw hat-  Meet the Amish Sailing Team! 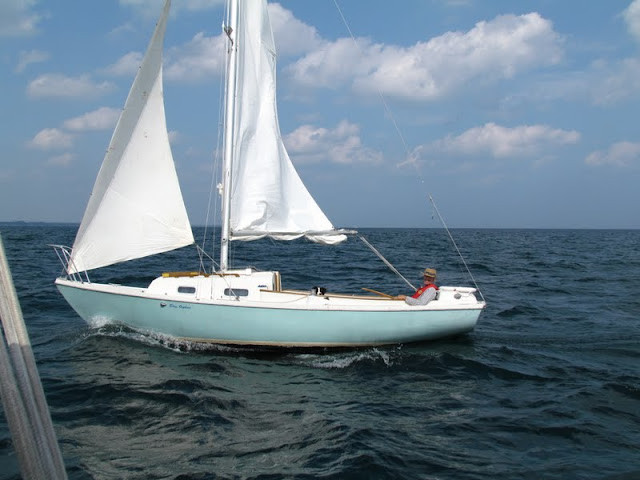 Sirenistas were out enjoying the breeze, too! 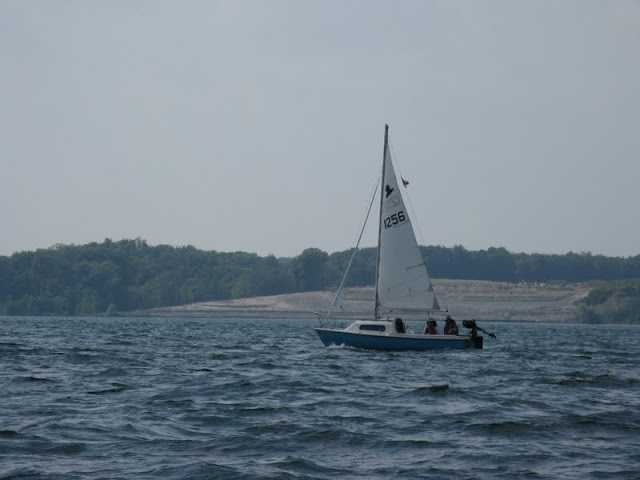 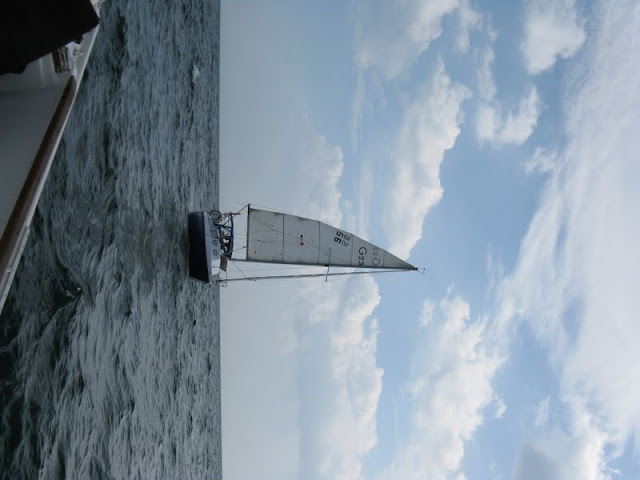 Thanks for taking the time to check us out.  Please feel free to "Talk the Dock!"  Link us, follow us or just tell your friends!
Posted by Dock Six Chronicles at 09:50