"Ooh, a storm is threatening my very life today..."
-The Rolling Stones


At the end of our last thrilling episode, we were looking for shelter.    When a storm kicks up on Lake Erie, the wind usually howls from the West,  pushing the lake East in the form of big nasty waves.  Therefore, when looking for an anchorage to wait out the weather, the smart at-risk skipper wants a bay that will provide some protection from those waves coming from the West, ideally with a navigable river or two for added wind and wave-buffering comfort.   Long Point Bay is the answer to an imperiled mariners' prayers. 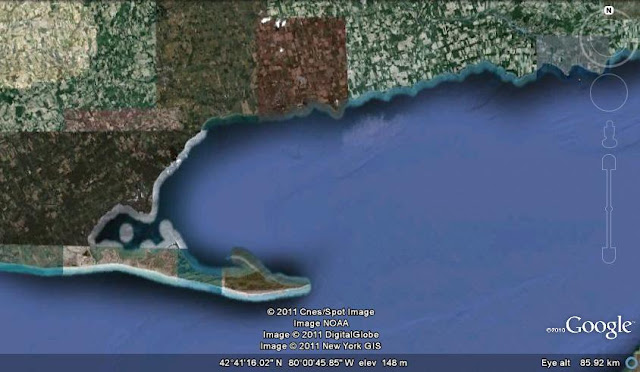 Long Point is the er, long, uh, point you see in the picture above, aimed vaguely east.  The longest freshwater sand spit in the world, Long Point's benevolent shelter fostered the growth of thriving fishing, lumbering and agricultural enterprises over the past several centuries.  The bay enclosed by the point is almost 500 square kilometers

As groundbreaking and cutting edge as we are here on Dock Six, we aren't the first to seek shelter on Lake Erie.  Humans have been using Lake Erie as an aquatic highway for millenia, from the Neutral Indians onward, and unfortunately there is no record of the first unscheduled landing.  There is however, a record of the first landing by hapless in-over-their-heads white guys. 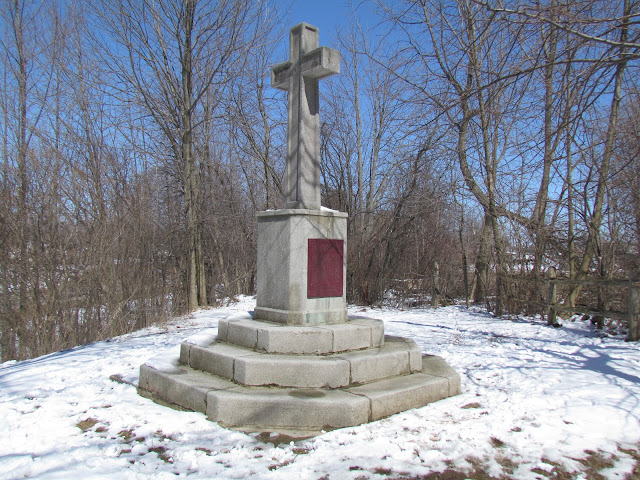 In the winter of 1669, a band of French explorers and two missionaries, Frs. Dollier and Galinee, wintered over on the north shore of the bay at the spot where Port Dover would later grow.  French New World exploration was the 17th century equivalent of the Apollo space program... if NASA was run by the Vatican.  The French monarchy, encouraged by reports from explorers returning from fruitless shortcut-to-China searches, dispatched more intrepid adventurers to explore, map and claim all the land  and riches they found.  Oh yeah, and since the Roman Catholic church was bankrolling a substantial part of these forays, priests were in command of many of these wilderness treks, bringing the capital-G God to any and all heathens encountered, which is the long way of explaining how Dollier and Galinee ended up here.

Apparently so relieved at surviving the Lake and the winter, and eager to do their part for their king and their God, the priests erected a cross with the King's "arms" at the site. 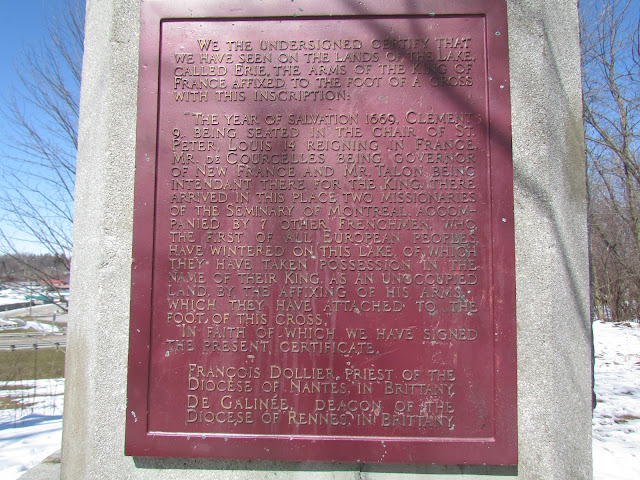 With that, the north shore of Long Point Bay became French.

It didn't mean much.

In the spring of 1670 the missionaries and their paddlers set off farther west, and never returned to the Bay.

By the end of the next century others had discovered the bounties of the bay, and mills, forges, farms and ports were born, grew and declined.  The only port that continually grew and thrived was Port Dover. 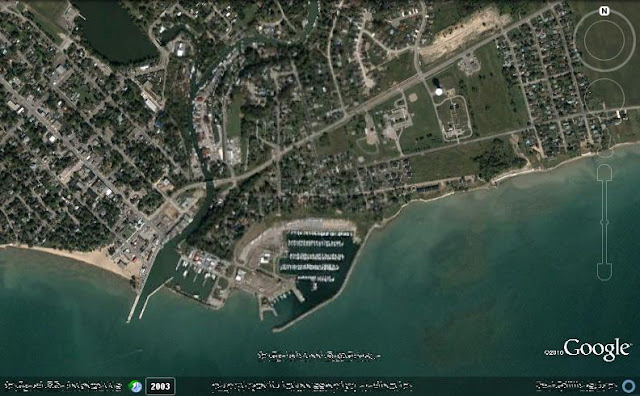 In future posts, we'll explore Port Dover and gunkhole around the bay.  I hope you'll join us!
Thanks for joining us here on the Dock!  If you like what you see, bookmark us, link us, follow us or just plain pass us on to your friends!
Posted by Dock Six Chronicles at 16:55