"Taking a break from the role of the everyday boy..."
-Wang Chung

The youngest captain on Dock Six  (I gotta come up with a catchy name for us- Dockers?  Docksters?  Hmmm, might be time for another contest,)  Jordan may be one of the most influential.  Here's what I mean:

Two seasons ago he was sailing with his 'rents on their S2, "Tempus Fugit."  I've always admired S2s, so I first met Jordan and his family in passing, as Tempus left Dock 2 and sailed past us, or as  we waved at each other on the water.  Turns out the Crankies are his grandparents, and they mentioned that Jordan really liked Chirp.  I asked them to pass on my thanks, and to let him know that he's welcome to come and join us for a sail anytime. Then last season, I notice a cute little daysailer in one of the nearshore slips on the Dock.  The Crankies proudly pointed out that it was Jordan's.  Jim said, "He's got the bug bad.  He's always drawing boats,  bugging to build boats, watching sailing videos, so he finally convinced his mom and Andy to get  that little boat, Saphira." 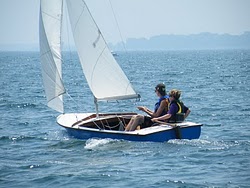 Jordan filled most of the summer of '10 with sailing school-  he passed CYA White Sail levels with ease,  and  earned his Skipper's hat!  The kid has sailed "Saphira" all over the Bay, and probably has more miles under his keel than many sailors with less hair and more waterline.  Pretty impressive for someone who isn't even thirteen years old yet.
Now that he had a boat of his own, he set himself  to convining his grandparents that they really needed a sailboat.    It wasn't too long before Jim and Marianne brought home Cranky, another boat that Jordan is hugely enthusiastic about.  See what I mean about influence?  The rookie has the makings of a successful broker.
One of my goals this season is to get Jordan behind the wheel of Whiskeyjack-   a competent, confident designated driver would be a valuable asset on the Dock!

Jordan even has his own blog:  http://saphirasailing.blogspot.com/
Posted by Dock Six Chronicles at 15:25