"We were young, and we were improvin'!"
-John Mellencamp


Sunday dawned, hot, sunny and humid.  No plan, no schedule and no wind, so no hurry to leave the dock.  We enjoyed a lazy breakfast with Gavin and Sylvia, and SWMBO had just set off in Quack, our inflatable, on a water refill mission, so I decided to take a walk down the dock.  I heard a familiar voice call my name, I turn, and there's my brother, Brent!

Apparently, I need to check my email more often.  He had fired off a signal that he was going to come down to see us.
I hadn't read it.

So my pleasant surprise visit was his announced plan.

That pretty much describes the difference between the two of us in a nutshell.

Turns out that my favourite sister-in-law, Anne, and my niece and nephew were also here.  Yay!  New Crew!

My niece and nephew, Danica and Preston  (Don't even think about calling them Dani and Presto.  Or Nicky and Tony.  I tried that.  Damn near got my godfather card pulled.)  are about a year and a half old, with all of the wobbly curiosity that entails.

We've never had toddlers on board.  How baby -safe is our boat?  How baby- safe is the weather?  I did a quick scan of the bay outside the breakwall- looks relatively calm.  A few whitecaps, but not bad.

Wait- do we have PFDs that will fit toddlers???
Never mind, Brent and Anne had picked up Roots toddler PFDs.  Great, the newest crew has the shiniest, trendiest lifejackets on the boat

We get everybody loaded up and decide that a tour up the river will be the best course of action- we get on the water, but there will be enough visual stimulation on shore to keep the twins occupied while being out of the waves, and it's a quick return to the dock if anybody starts kicking and screaming.

We needn't have worried. 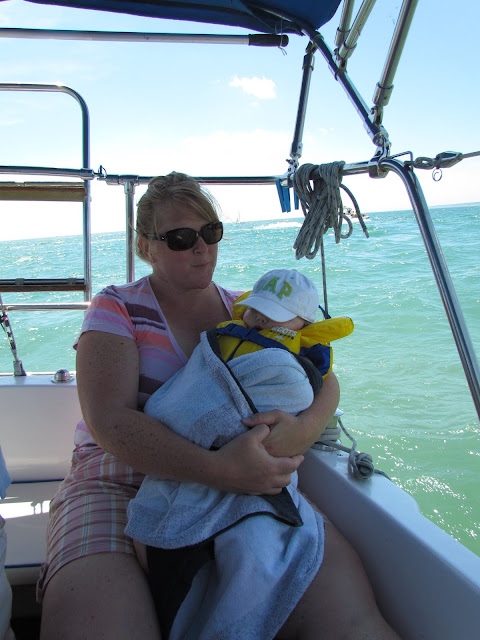 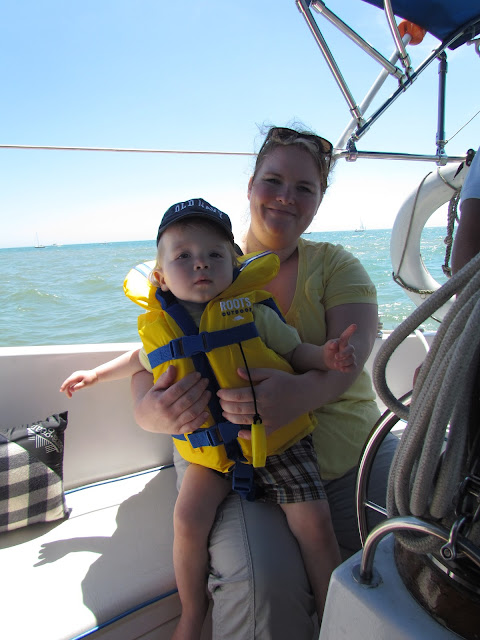 and Danica continued to snooze... 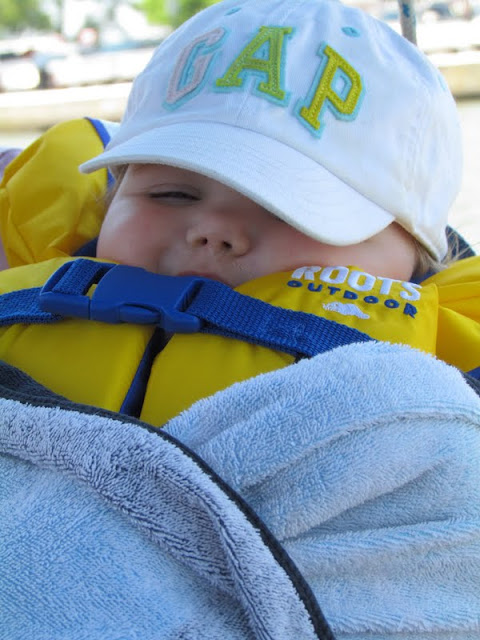 ...while Preston checked the compass... 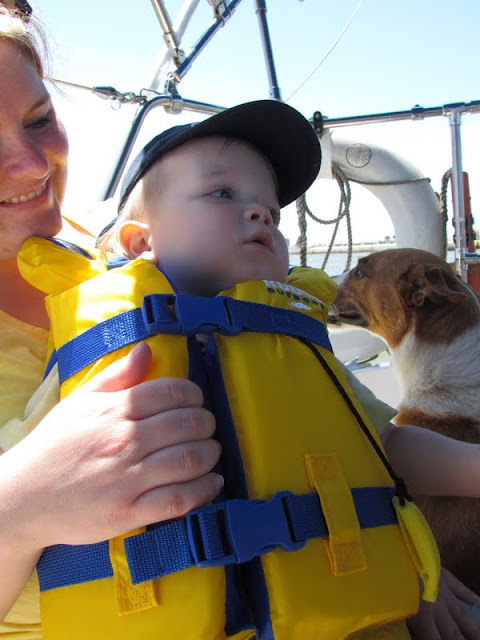 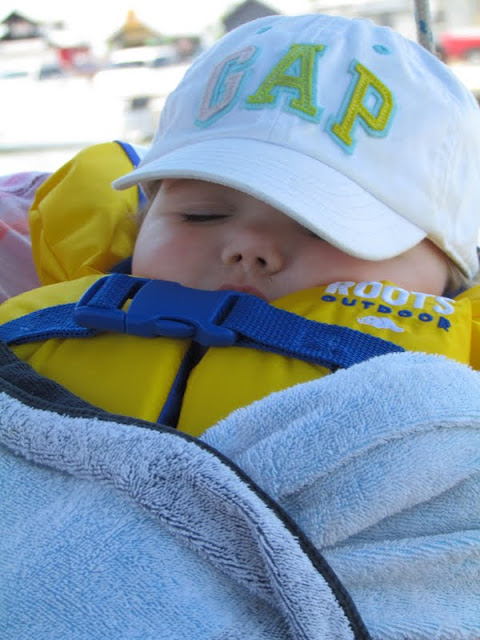 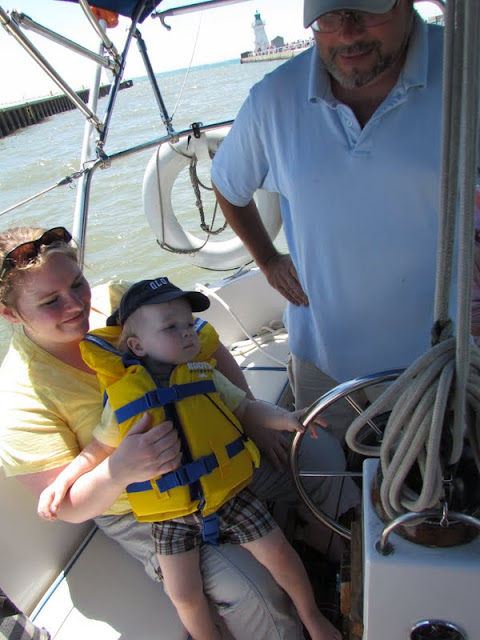 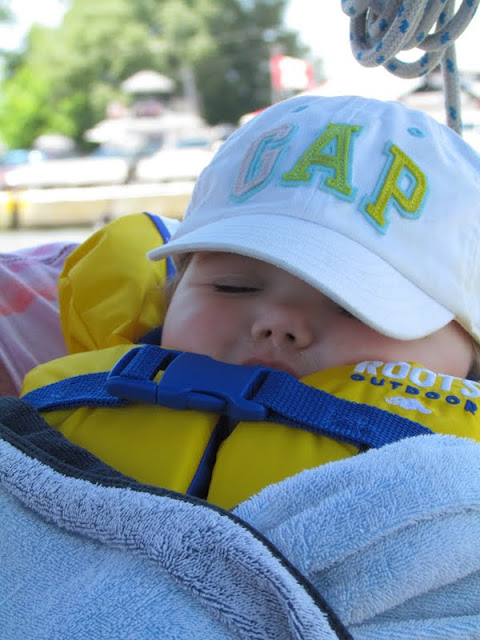 .while Preston steered the other way. 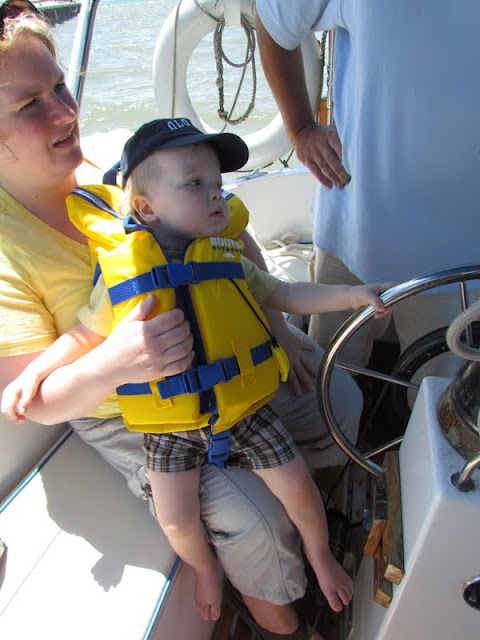 No seasickness, no screaming, no crying, no tantrums...

I was really proud of Brent.

The kids were great, too!

To top off a great afternoon, we all went out for dinner.  Thanks for treating to a great meal at the Arbor, Brent and Ann!

We hope to go sailing with you again soon!


Thanks for taking the time to check us out.  Feel free to "Talk the Dock!"  Link us, follow us, or just tell your friends!
Posted by Dock Six Chronicles at 16:44

Email ThisBlogThis!Share to TwitterShare to FacebookShare to Pinterest
Labels: crew