"It all started with the big bang!"
-Bare Naked Ladies


This year, Canada Day actually fell on a Friday, giving us a true long weekend.

Is this a great summer, or what?

Thursday after work we packed provisions, pups and people into Lady Liberty (jeep) and Leonard (Smart car) and headed down to the Dock for an extended sojourn.  In typical compact- sport -pup fashion, as soon as a car door opened, Finn launched himself down the Dock to visit George on The Instigator, while SWMBO and I off-loaded and Inky gimped her patrol of the perimeter, establishing her primacy over all she surveyed, geese or no geese.

Then the wheels came off Finn's evening.

The mutt  was roughly 300 yards outbound on the 400 yard trip, ears back, legs pumping, tongue flapping, in full fur-covered cruise missile mode, when somebody set off a firecracker in the distance.  Without missing a step he reversed course, and REALLY put the coals to her, streaking back to the refuge of the jeep,  whereupon he made every effort to hide under the front seat.

He really doesn't like firecrackers.  A lot.  Eventually he was coaxed back onto the Dock and down to Whiskeyjack, where he huddled in his cave under the v-berth while the rest of us enjoyed the sounds of live music drifting over from the marina pavilion. 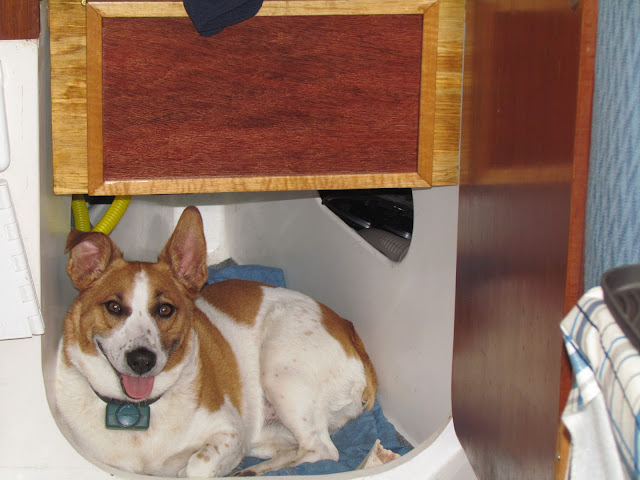 Next morning was the start of Port Dover's Canada Day festivities.  C-Day is a Very Big Deal in Dover, with a parade on Main Street, a dog show, Rib Fest, music, house decoration contests, yard sales,...
and the Boat Parade.  Alas,  I had to work, but SWMBO was able to capture some of the participants from the marina. 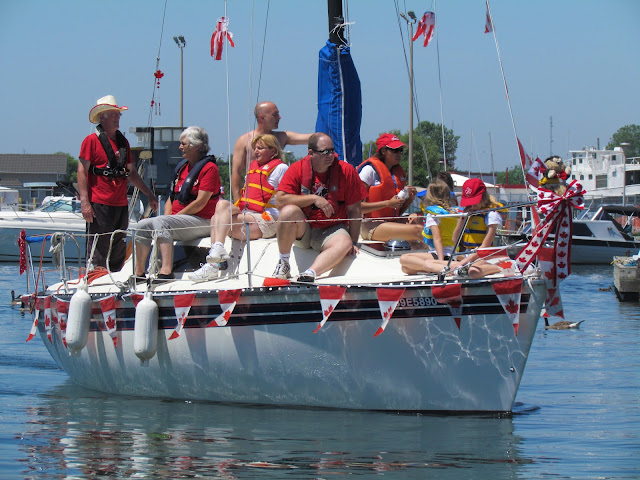 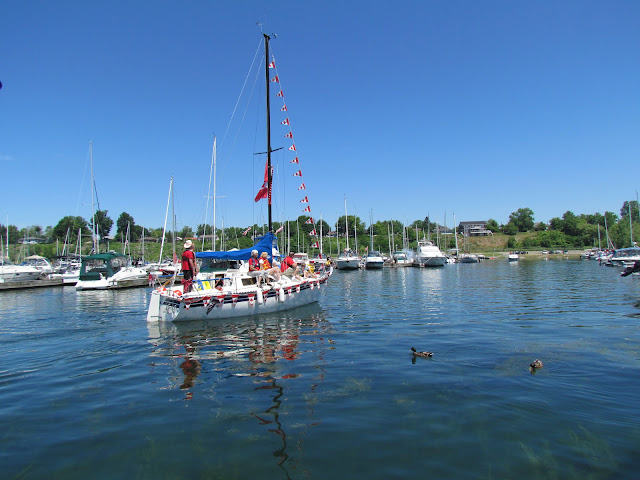 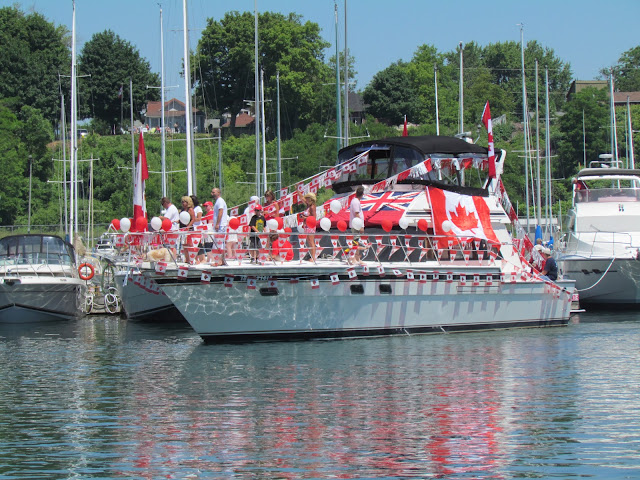 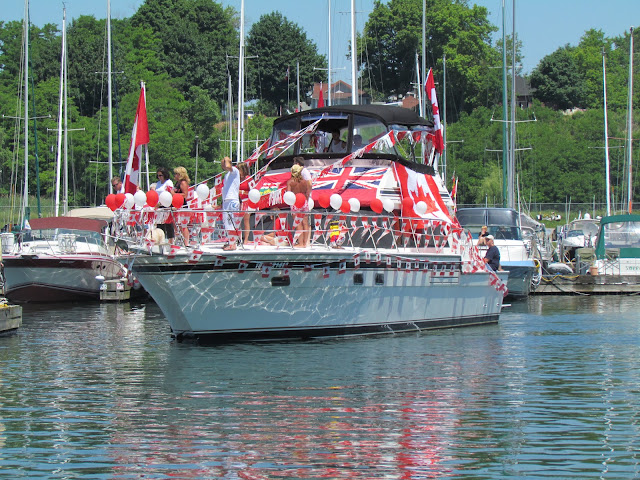 Later that afternoon,  an impromptu parade was created in the marina, when a 92' Lazzara lumbered up to the fuel dock and occupied the majority of the fairway to boot. 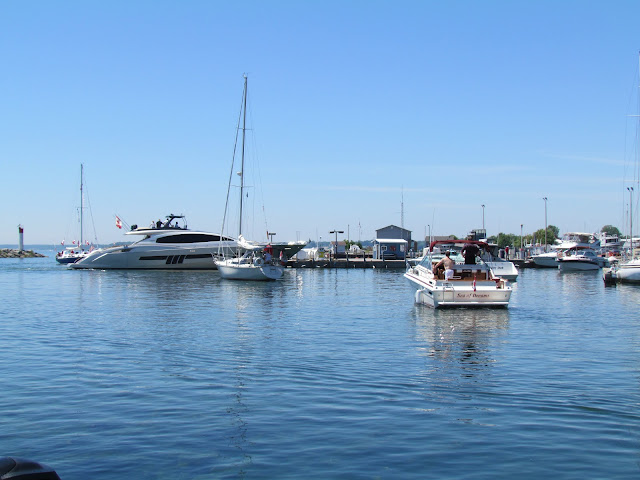 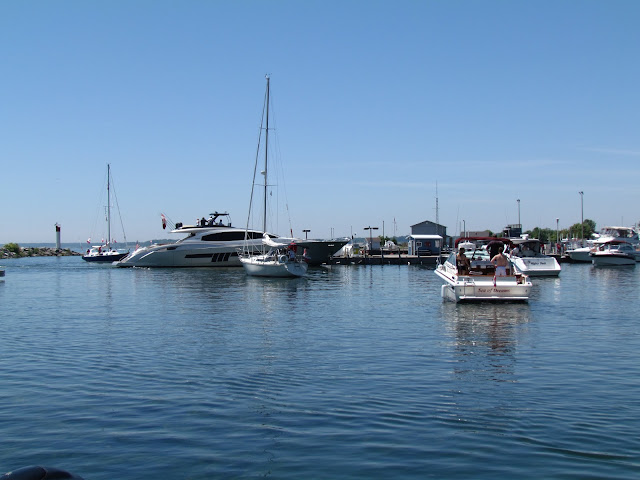 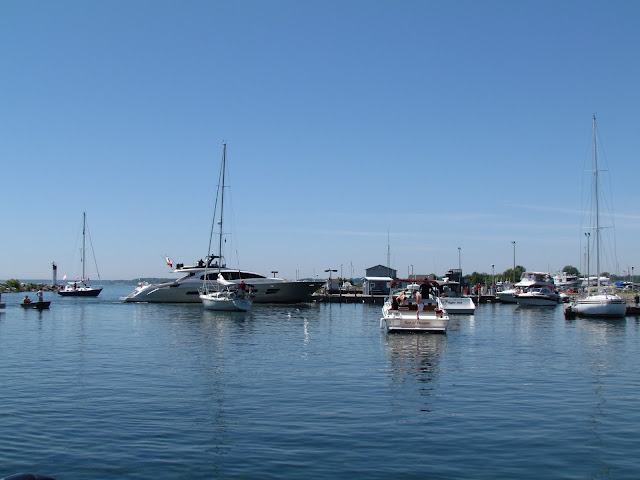 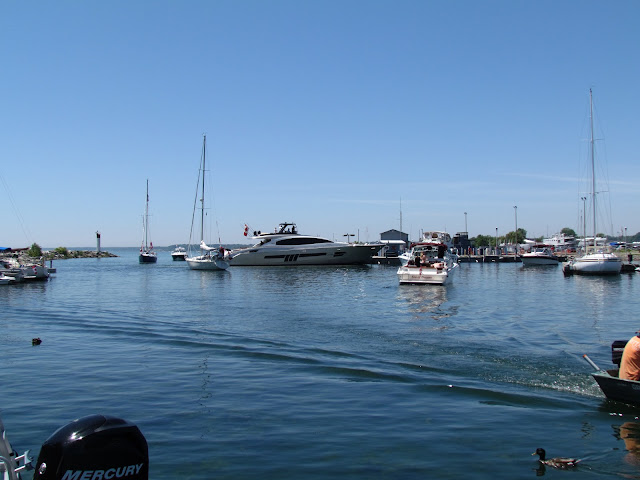 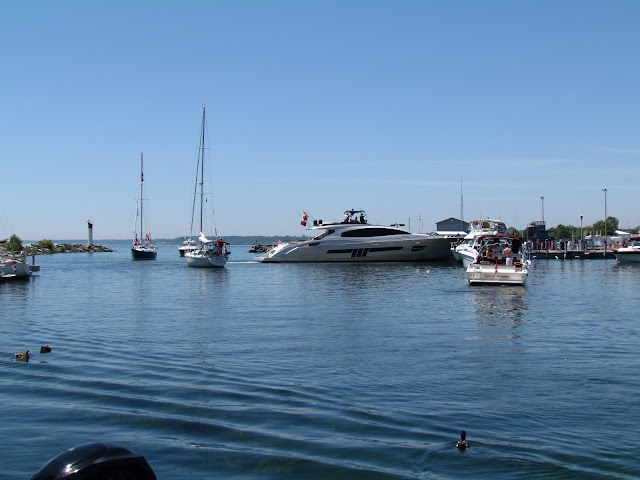 Here's the quick stats, according to the fuel dock staff:
$9 million value. Or, about the total value of all of the boats on Docks 1,2,3,4, and 6.
$5000 to fill up.
$50 000 of fuel to travel from Dover to Miami, where the boat spends the winter.
There is an enclosed PWC hangar on the stern that accomodates the requisite PWCs and RIBs. 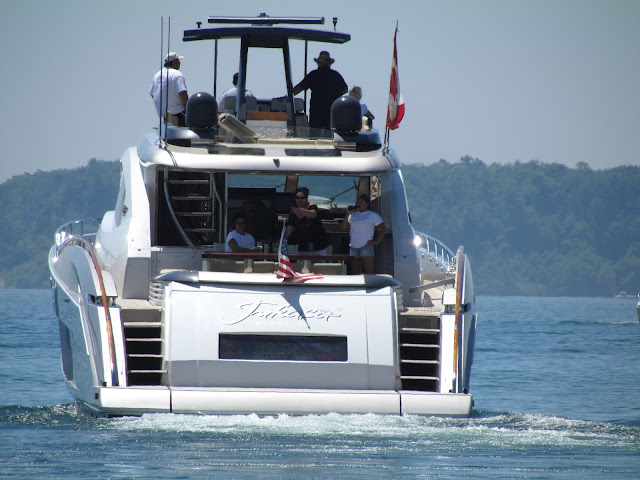 She pulled in for a pump- out, but the mission apparently went unaccomplished because the marina's pump didn't have enough lift- it could pump okay, but not enough to accomplish the "out" part of "pump-out."

Friday I decided to drain the fuel filter, adjust  the valve clearance and retorque the head on our iron spinnaker.  In so doing, I managed to eliminate her ability to run.  Oh well, fix it on Saturday.  It was time to eat.  Jack joined us for a tasty meal of garlic-sauteed shrimp and vegetable risotto.  Finn hid from the fireworks.  Inky was happy to hang with Bas.  Bas was happy for the snacks.  Win/win/win...except for Finn.

On Saturday, at the opposite end of the size spectrum  from the Lazzara, Gavin and Sylvia headed out in Persephone, eager to test out Gavin's new jib downhaul...  and his sporty new hat.  Apparently everything worked because they all came back, poodle included. 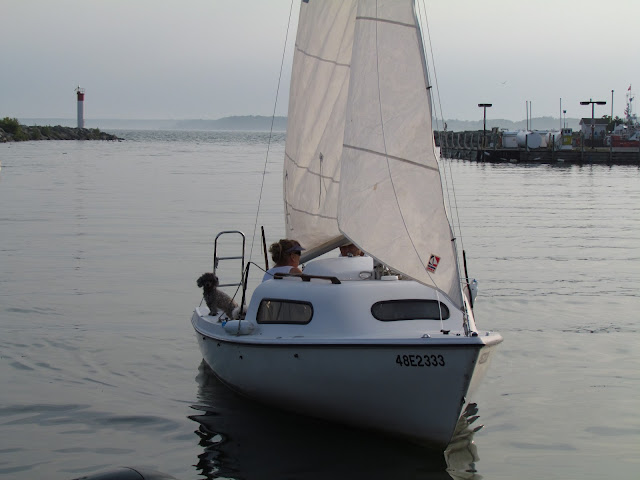 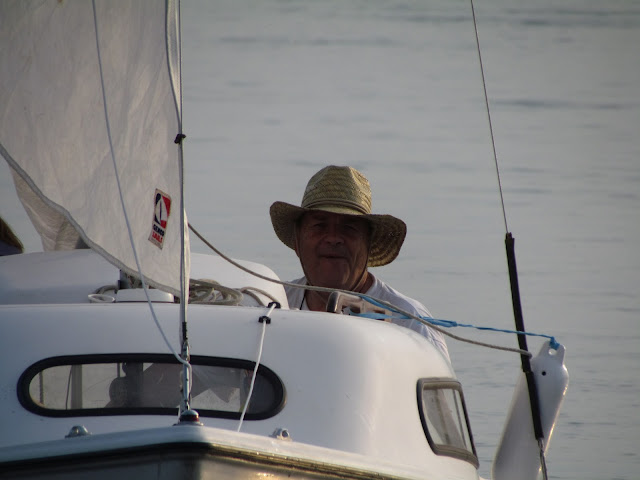 It was Gavin and Sylvia's turn to cook, so we enjoyed barbecued ribs (ask Gavin for his "bone dirt" rub recipe- damn tasty.)  and asparagus and mushrooms while we watched the sunset.

Meanwhile, what were the powerboaters doing?

James and Mikey had invested in heavy firepower and light beer. 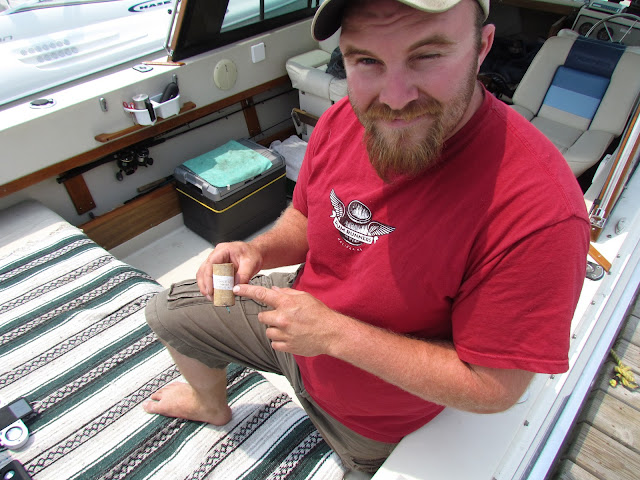 Something tells me these are not CSA approved. 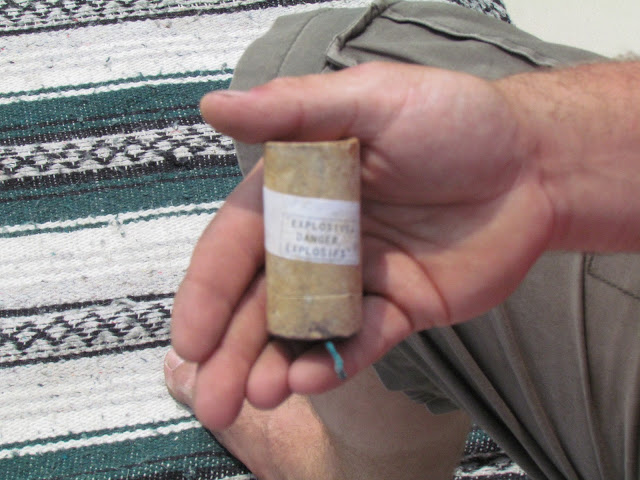 Mikey invested so heavily in light beer, he thought that waterskiing to Pottahawk (about 11 nautical miles into the wind, with 2-3 foot chop) was a great idea. 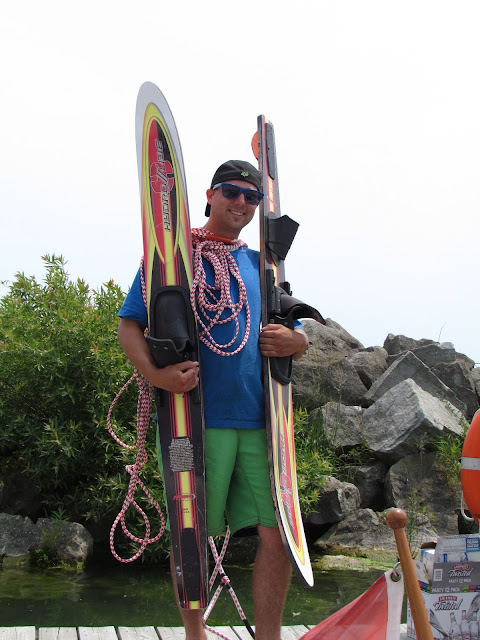 Best were laid, the departure was documented.... 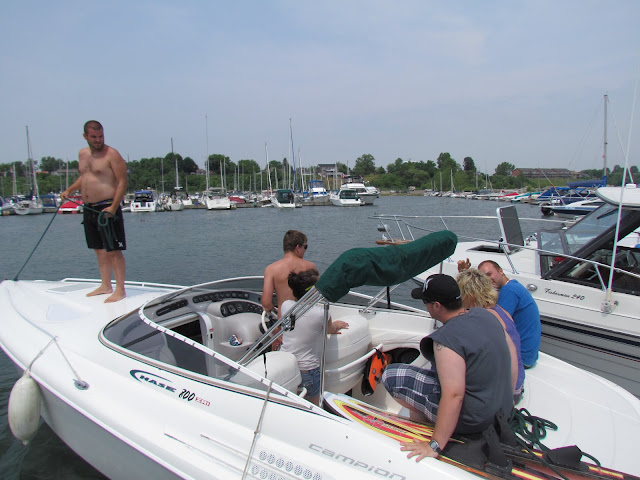 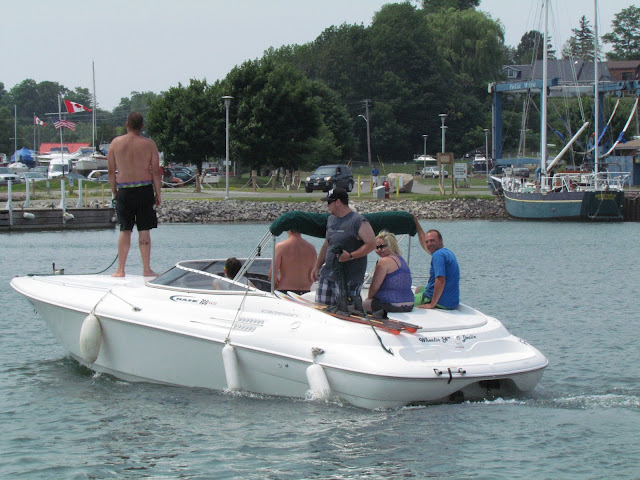 .... and Mikey came to his senses and stayed in the boat.  Or something.  As the saying goes, "pics or it didn't happen!"
I haven't got pics, so the excuses don't matter.  It didn't happen.

Sunday was a day of rest, with a pleasant surprise crew.

But, that's another story.

Thanks for taking the time to check us out.  Please feel free to "Talk the Dock!"  Link us, follow us, or just tell your friends.
Posted by Dock Six Chronicles at 15:45