"But where we are going, Oh it hasn't fully, fully been told..."
-Ruby Velle and the Soulphonics

So, where were we?
Right:  Boat is launched, boat is sinking, boat stops sinking, yadda yadda, Karma glides into her slip with no further drama. 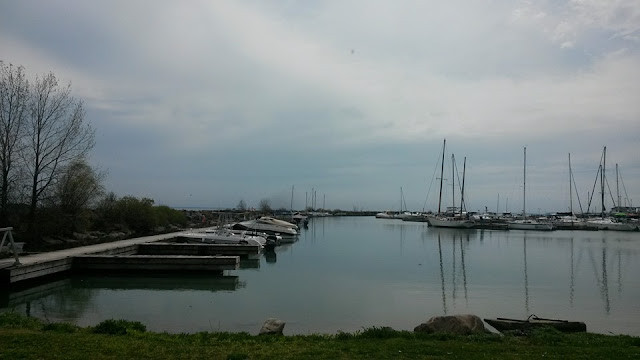 With one boat launched successfully, it was on to the rest of the fleet.   With a little help from the crew of  Boats....

...we got our commuter dinghy, Chameleon, to the marina and into the water.

Then, we tackled Ereni, giving SWMBO's Bluenose  a quick and dirty makeover... and a black nose in the process, to cover some of that quick and dirty.

Ereni  is due for some serious  hull refitting this winter-  the brightwork needs to be brightened, the hull needs to have some blisters ground/filled/faired, and then we'll refinish the deck and topsides.  But, we think we'll keep the nose treatment, and add some nose art- SWMBO and I agree we both kinda dig the vintage "rat rod' vibe.

Over the two full years we've lived with, and aboard, Karma, we've developed a pretty good idea of our wants and needs, and have fulfilled many of them along the way...

Our reefer install has been a well-received luxury, with an unintended consequence- power insecurity.

We have 3 40w solar panels that live on top of our bimini, feeding a single Group 24 house battery and a Group 24 starting battery, also charged by the 35 amp alternator on the inboard diesel. Last season, this system proved sufficient....

... barely.
If the solar panels underperformed for more than a day, some motorsailing was required to top up the batteries.  We were careful about energy usage, charging electronics only during the middle of the day, being judicious about illumination, vhf and instrument use, etc. and never really had a power crisis...

This season, I made the decision to add more power and more power storage. Here's the plan:  add another 100w of solar power, in the form of a semi-flexible 100 w panel installed on the dodger, then combine the 2 Group 24 batteries already onboard into a two battery house bank, and add a third Group 24 battery for starting, locating it just aft of the transmission in the engine bay. Next year, we will replace the group 24 house bank with a pair of 230 amp hour 6 volt GC-1 golf cart batteries, if we find that the 160 amp hour capacity of the house bank is not enough We decided to isolate the starting battery from the charging circuit- we opted to install a Xantrex Digital Echo Charge.

So, I bought a bunch of obscenely priced cable, less obscenely priced wire, a battery and assorted electrical parts and pieces and tools and stuff and dug in, on the hottest day of the year....

... and everything largely went together better than I expected....

.... once I pretty much gave up on the original plan.

I cut and stripped and crimped new cable to wire the existing batteries in parallel...

...and that is pretty much where the original plan ended.

A "a semi-flexible 100w panel installed on the dodger" became a semi-flexible 100w panel mounted on the foredeck. temporarily laying the panel on top of the dodger and measuring output demonstrated that there was just too much shading for the panel to generate anywhere near it's potential output. Because of our boat's design, and our usage, the foredeck gets little traffic, so I decided to see if the "you can even walk on it' claims about semi-flexible panels were true.
The install was pretty straightforward, once I wrapped my head around drilling 3/4" holes in the deck.  An hours worth of work saw two of the aforementioned holes drilled, some wires run, and the panel fastened to the deck with, and all fittings sealed with, 3M 4200.

So, new batteries go in, cabling is connected,  and power flows!  Meanwhile, it becomes apparent that "add a third Group 24 battery for starting, locating it just aft of the transmission in the engine bay." is a non-starter.  So, the new batery gets located slightly farther aft, under the aft cabin berth.  The Xantrex Echo Charge install was a breeze- the instructions were clear, the manual was well-written, and all of the supplied bits and bobs were of good quality.

Was it worth it?
Yep.

We now generate more power than we can use  and store most days, and have had no problem keeping ahead of our loads even during our very hot July, when our refrigerator was running much more often than it's typical 30% duty cycle.

As we have realized the need for more power, we also have been grappling with our need for more space. the S2 8.0C is a cleverly designed boat, pulling 26 feet of accomodations out of a 26 foot LOA hull...  but that means that on-deck and cockpit storage is  non-existent. Coaming pockets would be a big help for line management- sheets would no longer be all over the cockpit benches and underass, an uncomfortable proposition during a crash tack.  I did some measuring, found a pair of fire extinguisher pockets in the clearance rack at a local chandlery, and a little mahogany and varnish and cutting larger holes in our boat and screws later...

Our cockpit is slightly more organized.

Also seen in the above picture, behind the compact sportsdawg, you can kinda spy that scrap mahogany was also used to craft risers, to raise the height of the bimini slightly.

Below, little has changed, other than a new trawler lamp,  cushions that are 1" thicker and comfier, and new Low-Buck back cushions and throw pillows have been added:

We lucked out at our local grocery store (I shit you not- the grocery store)  and found outdoor furniture cushions and pillows in the right colours,  and amazingly, the right size, for half price.


Life is good, and more comfortable than ever...and the sailing's not too bad either.


Thanks for having a read.  Pass the word-  Please "Talk the Dock!"

Posted by Dock Six Chronicles at 17:11