"You're right where I wanna be..."
-Michael McDonald

Way back, I introduced you to Ed and Chris, about to embark on the cruising life aboard their Endeavour, Freedom.
http://docksixchronicles.blogspot.com/2011/07/shameless-plug-for-some-cool-vids.html

I was expecting to see them stop by at some point this season on their way south, but Mother Nature had other plans.

Remember Hurricane Irene?  Y'know, the storm that was sorta anti-climactic for the NY/NJ coast?  Turns out, it wasn't so benign upstate.

From a geographical, if not meteorological standpoint, the outcome was triple weird, folks.  Check this out:

Irene generated  a stalled front over upstate New York and Vermont, causing bucketloads of rain to fall for hours, leading to widespread catastrophic flooding, so while NYC was largely spared, the  landlocked state of Vermont declared a state of emergency, and upstate New York, specifically the Erie Canal, got seriously whacked with the catastrophe stick. 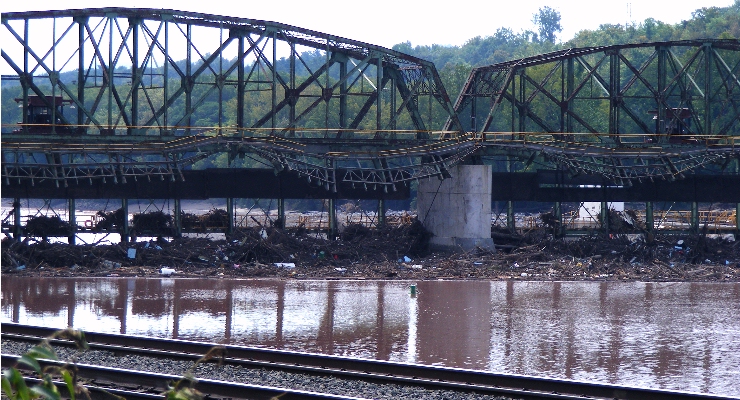 
Game over for the Erie Canal this season, and unless some fundage becomes available to repair the damaged locks, next season looks in doubt also.

"Yeah, so?"  some of you snort, "How does a closed canal in New York affect us up here?"

Like this- the Erie Canal is the nautical pleasurecraft superhighway to the ICW.  The Great Lakes connect to the Canal, the Canal connects to the Hudson, the Hudson connects to Long Island Sound, Long Island Sound  is like a cloverleaf- turn left, you head to New England and points north, turn right and you're travelling south with the snowbirds on the IntraCoastal Waterway, all the way to Miami.

No canal, no Miami.  or Bahamas.  Or whatever.

Some cruisers decided to truck their boats south,  some decided to hope for the best, (rumour has it the canal will open on a limited basis on American Thanksgiving, but that is getting really late in the season for the month+ trip south to the Bahamas), and others, including Ed and Chris, decided to go west to go south.

Freedom simply headed north, up the St. Clair River  through Lake Huron, down Lake Michigan to Chicago where her mast was pulled and dropped on a truck, then Freedom became a powerboat, cruising down the canals, eventually to the Mississippi.

Anyadjective, the crew of Freedom has been blogging their adventures, and it has been a great read.  I encourage you to check it out.  I get the feeling it is going to be a great lifeline during the long cold winter ahead.

(Hey, if I keep kissing ass like this, you think they'll invite me aboard when they hit the Bahamas?)


Thanks for taking the time to check us out.  Please feel free to "Talk the Dock!"  Link us, follow us, or just tell your friends.
Posted by Dock Six Chronicles at 19:43