"Baby, everything is alright, uptight, clean out of sight..."
-Stevie Wonder

In our dirt-home, my desk is a mess, I have a stack of books teetering on my bedside table, and the floor of my car is carpeted with receipts, napkins and bagel wrappers...  straight-up Oscar Madison.

... All of which I cannot stand onboard.  When I step onto the Dock, I turn into a compulsive neatnik. Everything on our boats has a place, and if it doesn't have a place then a) it leaves the boat in shame or b) I build a place for it, and then that thing had better be in it's damn place, dammit!  I become Felix Unger in Topsiders.

(Hey, I think I may have discovered a new psychological ailment-  Nautical Unger-Madison Disorder.  I wonder if I can get a grant to do a long-term study?)

Therefore, it is not enough to simply have a boat in the water and sails on the spars.  Nay, nay, we are not ready to sail until everything that came off the boat in the fall is loaded back onto the boat, back into it's designated spot, or the new spot created for it, or off-loaded when it is realized that it is redundant.  Said redundant item will then be reloaded again as a "spare"  to be off-loaded again later in the season when it is realized that is is, indeed, well and truly redundant...
... Which is usually three days before  I will suddenly find a use for it.  Right now.  In the middle of the lake.

Maybe my nautical neatness fetish developed from a subconcious belief that lives may depend on it, but I don't think it is really that deep.  Instead I think the fastidious fixation is directly related to the diminutive quarters aboard our boats.  I can be a slob on the dirt, where there is the room to step around things, and I can close the door on clutter when guests arrive at stately Jones manor.  Those luxuries do not exist on the Dock.  The main cabin of Whiskeyjack, for example,  is all of 6' wide by 6' in length. In that 36 square feet is packed a galley, a berth and a dinette that seats 3-4, the space functioning as kitchen, bar, navigation station, dining room, living room, game room, closet and kennel, often simultaneously.  If one is constantly having to move items to get to other items, or if items move of their own volition when the boat leaves level, one's enjoyment of one's nautical home diminishes rapidly.
In other words, if you are going to be a slob, size matters.

Sunday dawned grey and damp, but by noon the sun had broken through and the humidity had started to climb. The grass needed mowing (again),  the gardens needed weeding (again), the house could use a vaccuuming (again),   but the boat needed to be rigged and loaded.  I discussed it with SWMBO, and the decision was made to flip a coin.  Heads we do house crap, tails we head to the Dock.

We were already gathering sailbags and cushions before the coin hit the floor.

SWMBO and I filled Lady Liberty from windshield to hatch, floor to ceiling  with boatstuffs and headed to the Dock.   A few hours later, with storm clouds threatening and thunder rolling in the distance, we relaxed in our squared away surroundings. 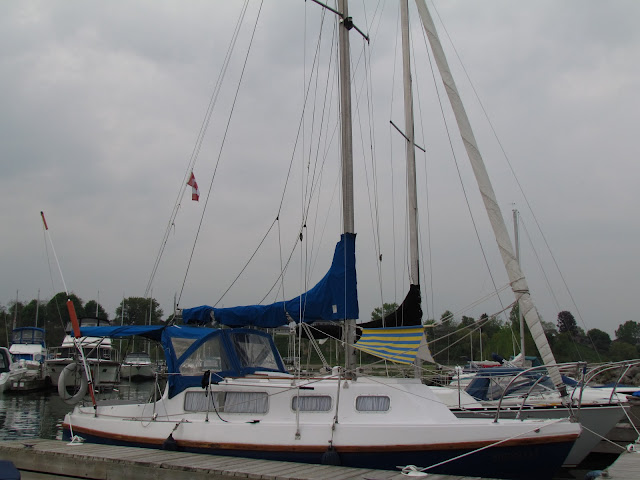 During the last couple of rainy days, SWMBO had been toiling over a set of fitted sheets for the v-berth, and was now able to nap-test her efforts: 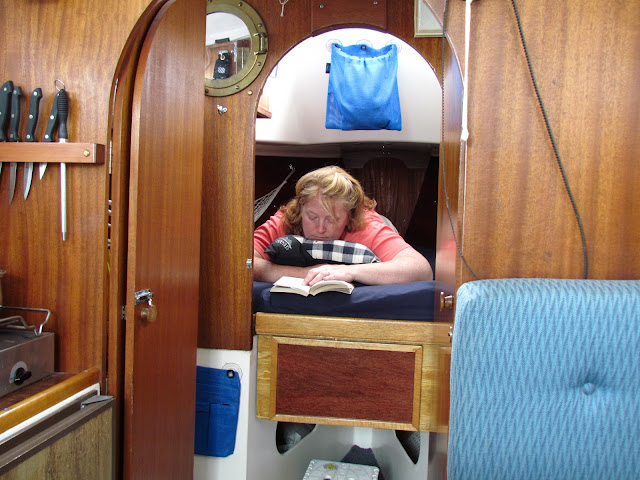 (btw, SWMBO has dubbed the v-berth, with her ever-apt logic, the "nap station."  After all, if a boat has a nav station which is used for navigation, then shouldn't the place where one snoozes also have a moniker?)

I survey the salon and call it good. 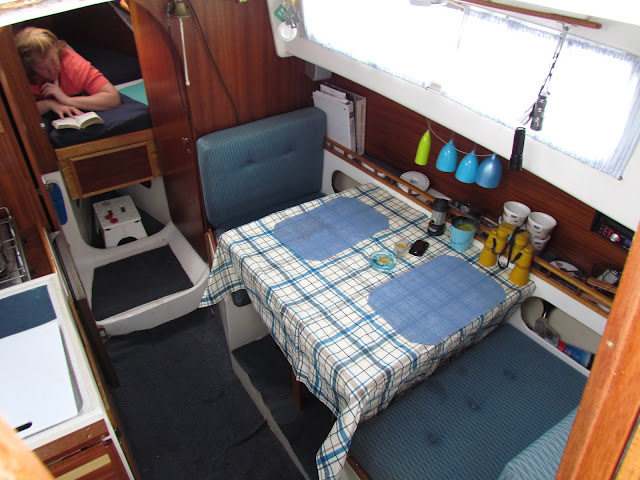 The low-buck spice rack has been repurposed as a low-buck binoc rack, and needs to be installed, but as the cabin stands now, nothing is going to crash from gunwale to gunwale on a 20 degree heel. 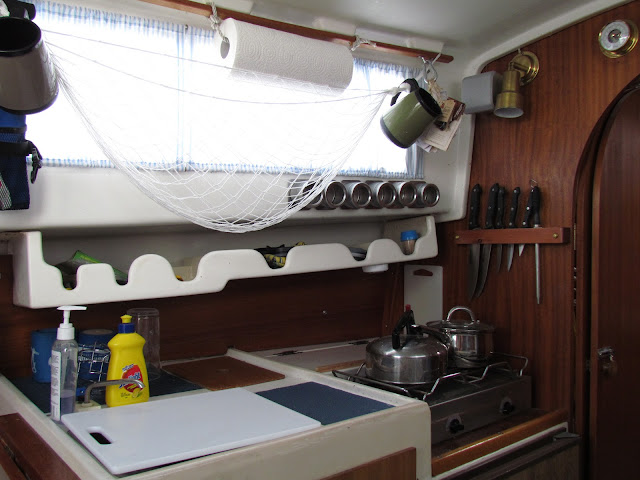 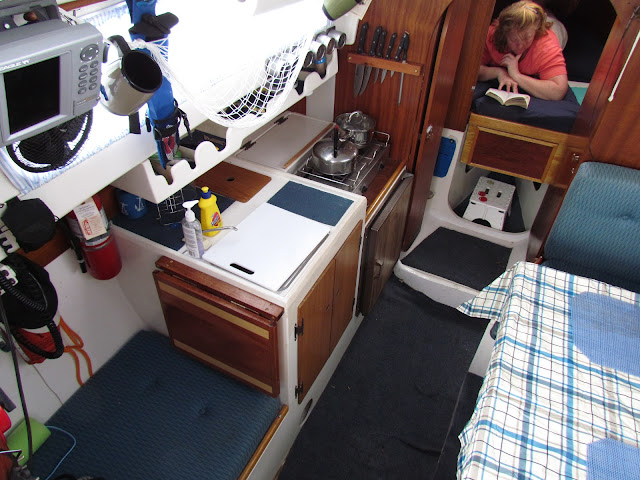 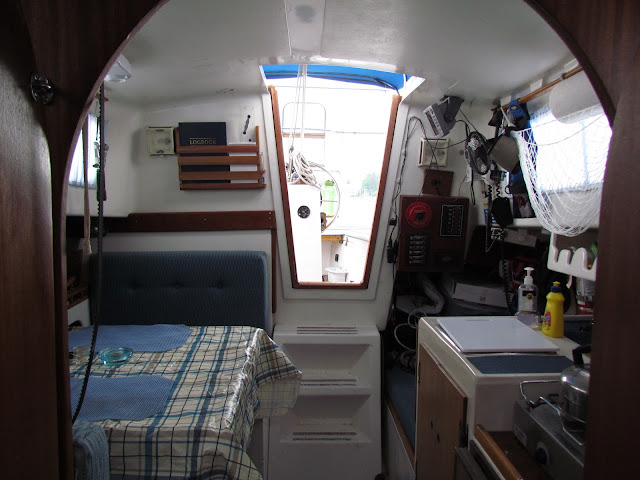 It's a fine line indeed  between "cramped" and "cozy,"  but I think we're staying on the right side of it.

Thanks for taking the time to check us out.  Feel free to "Talk the Dock!"  Link us, follow us, or simply tell your friends.
Posted by Dock Six Chronicles at 09:46