OPB Files: If It's Thursday, It Must Be Tanzer Day.

"I've been first and last, look at how the time goes past..."
-Neil Young


The downside of my new retail-day-job schedule:  I'm punching the clock on most Saturdays and Sundays.

The upside of my new retail-day-job schedule:  I get to sail with folks I wouldn't be able to sail with otherwise.

This week I was off on Wednesday and Thursday.  I spent Wednesday working on sourcing and installing a new solar panel (review in an upcoming post, )  and with SWMBO working 9-5 Mon-Fri at her day job and then busting hump at a part-time gig at an undisclosed location (which makes her sound like a cross between a superhero and Dick Cheney...  which ain't far off the mark.  Imagine Wonderwoman,  halfway through the second book in the Fifty Shades trilogy.  It may very well take the pathologist several hours to remove the grin from my face.)

Anybeating, I finally had the opportunity to finally sail with Len on his Tanzer 7.5, Cholita.  I emphasize "finally," because the skippers of Cholita and Whiskeyjack have shared the dock for five seasons, and we have waved at each other, shared seat-of-the-pants weather forecasts, shot the shi, er crap, but have never sailed together.

That changed this week, and it was a hell of a lot of fun.

Ed was down, ostensibly to play with the mainsheet rigging on his Siren, but it didn't take much coaxing to get him to join Len, and I was ahead of schedule on the day's maintenance punchlist, so Len had quickly pressed himself a crew.  The wind was sporty, too fresh to stay on the dock. We weren't the only ones who felt that way, The other two Tanzer pilots on the dock were also out on the bay, 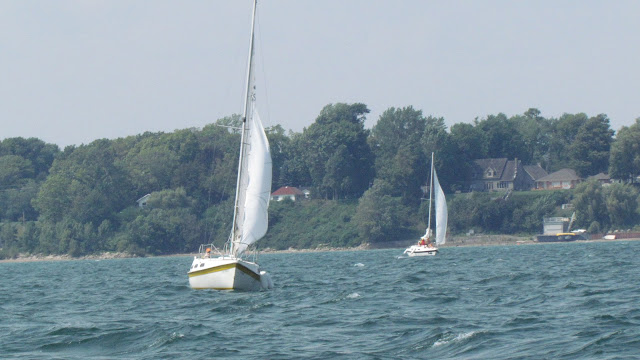 Will in his Tanzer 22, a smaller version of Cholita... 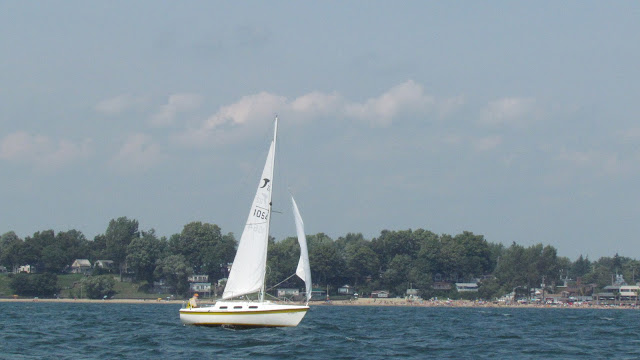 and Bruce and guests aboard Prolific. 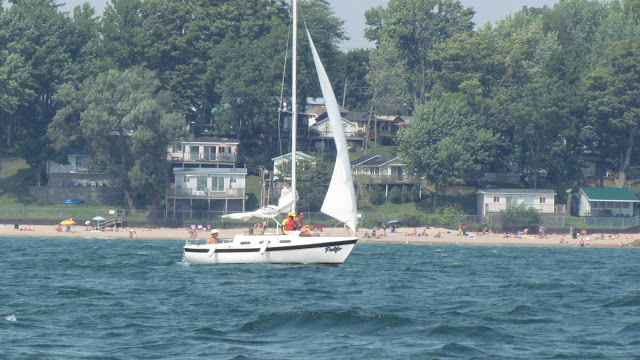 It wasn't all Tanzers on the Bay, however.  Some were taking advantage of the wind... 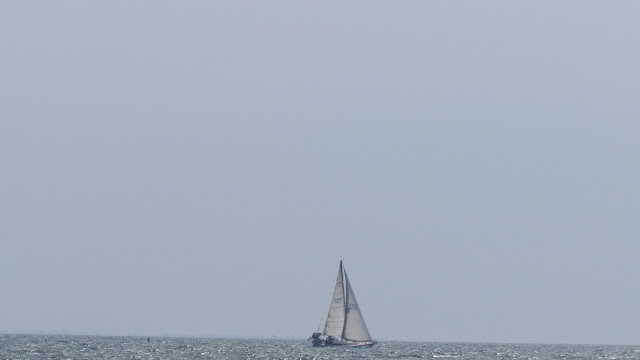 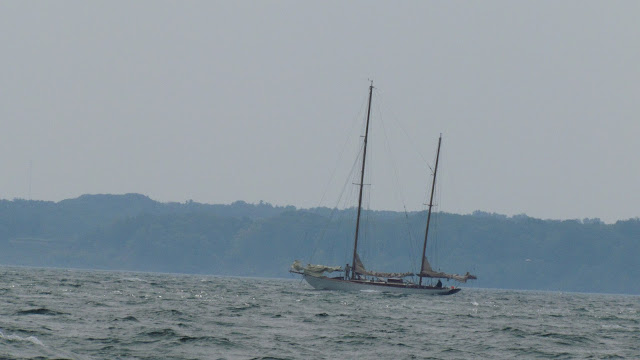 While others were riding it out... 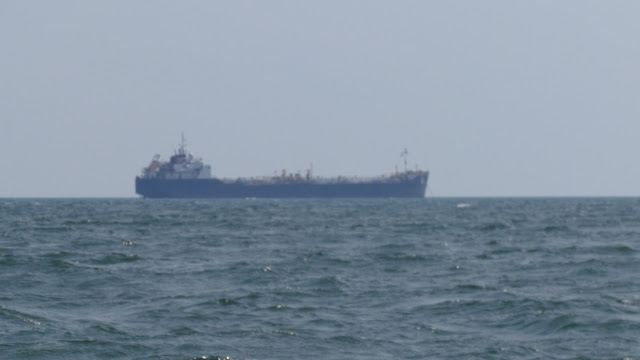 Cholita  has a unique rig, at least among Tanzer 7.5s- she has a club-footed jib, ie, the foresail has a boom. 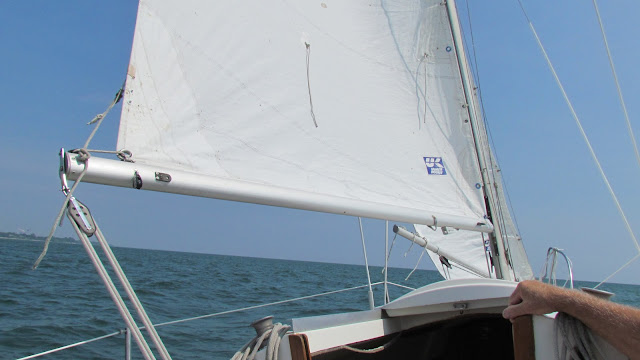 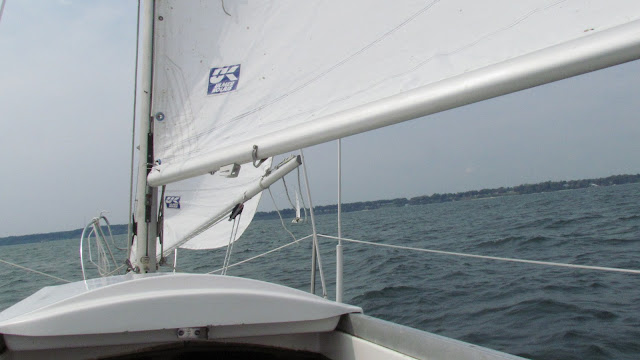 The boom and attendant tackle allow the jib to be tended with a single sheet.  This means that when you tack, you don't have to worry about letting out the sheet on one side of the boat and pulling the sheet in on the opposite side whilst tending to the helm and the mainsheet and maintaining situational awareness and...  in other words, it is a single-hander's dream.

As Len explained to us... 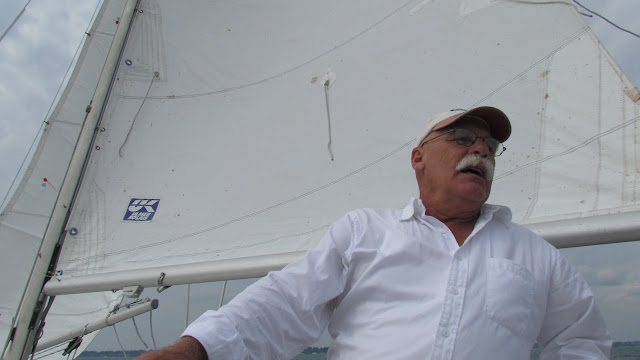 ...While Ed got some time on the helm and got a crash course in tell-tales and  travelers and sail trim and... 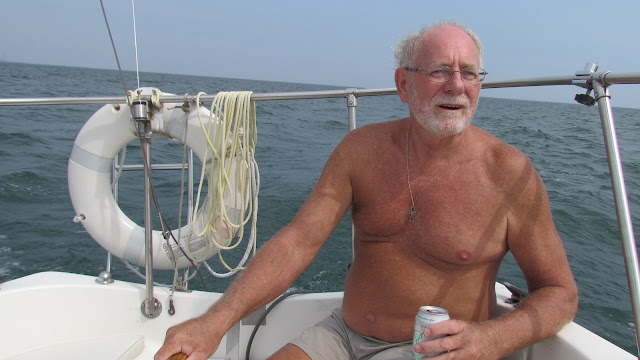 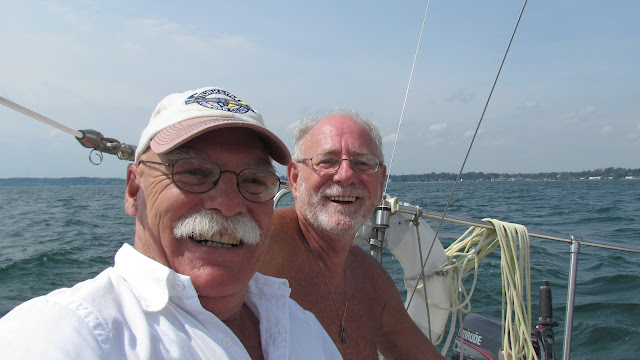 After sailing with Marco and Dee and Jordan, it's kinda unusual for me to be the youngest person aboard.
We scooted southeast, then tacked back toward the beach, with Cholita happily sailing on her ear... 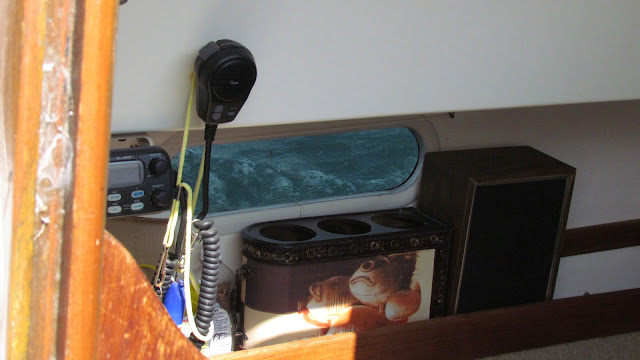 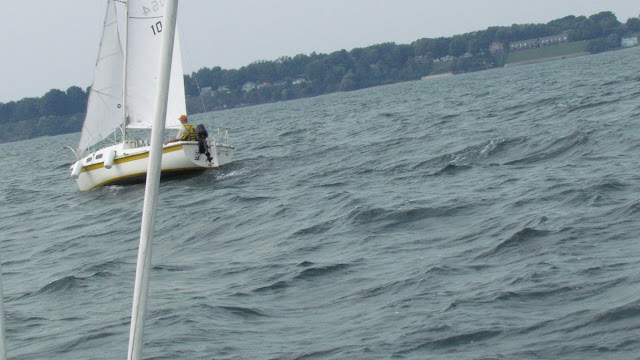 ...but where was Bruce and Prolific?

no matter, we were closing ground...  we slid past, and exchanged nods... 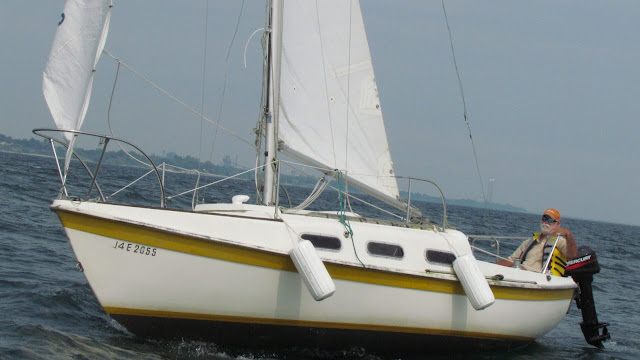 between Will and Len and Ed, I felt like I was finishing dead last in an Ernest Hemingway look-alike competition.

After passing Will, and with Prolific nowhere to be seen , and with the wind lessening,  we set off dead downwind back to the Marina.  This is the one point of sail that Cholita's club-footed jib didn't like.  Keeping the jib filled in the lightish wind we were seeing was difficult, but Ed pulled it off. 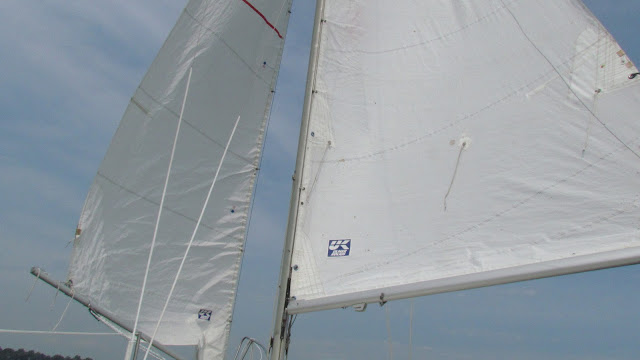 We returned to the Dock without incident and discovered the fate of  Prolific.

It turns out that Bruce had snagged his main halyard, but good, around his steaming light on the fore-side of the mast.  Unable to free the stubborn wire halyard, he was forced to return to the Dock to solve the problem, with the help of his greenhorn guest crew, a young man from Tanzania.

Who had never been on a boat before, let alone a sailboat.

He acquitted himself admirably, assisting to retrieve the recalcitrant wayward halyard with the help of two duct-tape-bound boat hooks. 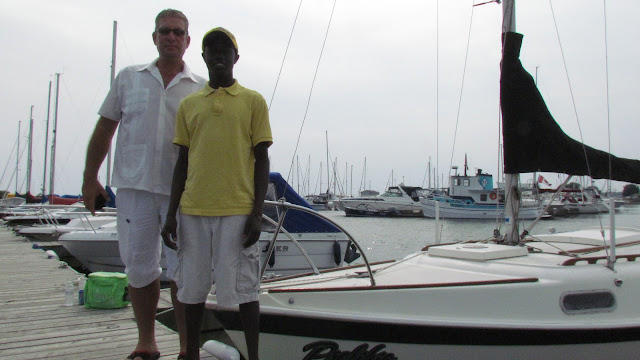 Duct tape and friendship- that's how we roll.
Thanks to all for a great day!