Imma Get a Little Sentimental For a Minute..

I’m re-reading Chris Rose’s 1 Dead in Attic , his compelling compilation of the highly readable columns he wrote for the New Orleans Times-Picayune following hurricane Katrina.  As I read of the ragtag reconstruction and resurrection of that most un-American of American cities, and the stories of those formidable stubborn individuals left behind and those who returned, I pondered.   The locals never doubted they would rebuild, because it was a magical place that was worth fighting for.  As I read  I contemplated my own dirt-life-  my connection, or lack thereof.

I have lived in Stately Jones Manor for over 12 years.  The house to the north has been sold once, the house to the south has been sold twice.   I don't know shit about any of the homes or homeowners across the street. I am on a nodding acquaintance basis with current neighbours on both sides.  I know their names.  We commiserate while shoveling snow.

If Stately Jones Manor was to be irreparably destroyed, I  would feel no sense of loss, and no compulsion or compunction to return or rebuild.  My neighbours would shrug off my absence, and nod and commiserate with my replacement, if one was to appear.

In other words, life would go on.

I know the names, email addresses, phone numbers, boat names, previous boat names,  dreams of the next boat, occupations, adventures, long-suffering spouses and favourite beers of many of the denizens here.  We gather by unspoken common ritual to watch the sun go down while we eat and drink and laugh.  We share the good, the bad, the ugly.  We get by, we get ahead and we get along.
I guess the best way to explain it, as corny and sentimental and cloying as it sounds is that Stately Jones Manor is a house.
The Dock is a home.

I don’t miss my dirt-home when I am here…

But I pine like a mofo  for here when forced to the dirt.

Losing Stately Jones Manor would be an inconvenience.

Losing the Dock would be a tragedy.

(If Stately Jones Manor happens to burn to the ground in the near future I am sure my insurance company will have a whole briefcase load of questions for me after a quick Google turns up this post.)

See, here’s the thing:  Bare naked truth be told, here on The Dock we’re all kinda self-absorbed and self-obsessed.

The capitalization ain’t an accident.

(Okay, maybe that should be capitalized too, but have you seen our boats?)

Our family of choice… The Dock.


None of us may be able to tell you who won last night’s major league baseball game, or which boy band has supplanted Justin Bieber in the moonlit fantasies among the under legal-drinking-age demo or even  whether the Muslim Brotherhood is an Egyptian religio-political entity or a movie checkbooked by Louis Farrakhan as a comeback vehicle for Ice Cube…
… but when you need someone to talk to,  sail with, consult on an electrical issue, borrow tools from or loan beers to, we got your back.

It's Thursday in July.  It's not just still air, no cloud HOT, it's also no wind, ass-crack sweating humid.  It beats the hell out of sub-zero, drifting snow January, but after provisioning the boat coming off the air-conditioned workweek, it's major-league uncomfortable.

The only option is to leave the dock and head for the beach to bake and bob.

We weren't the only folks executing this plan.  Hell, we weren't even the first.

Ralph and Julie and guests were already anchored, Hilary was ahead of us by five minutes, the Osborns (not to be confused with The Osbornes, capitalization intended)  had anchored Windslicer, and Jack and Melanie and Bas had snagged their Bluenose to the bottom on the millpond-still Bay: 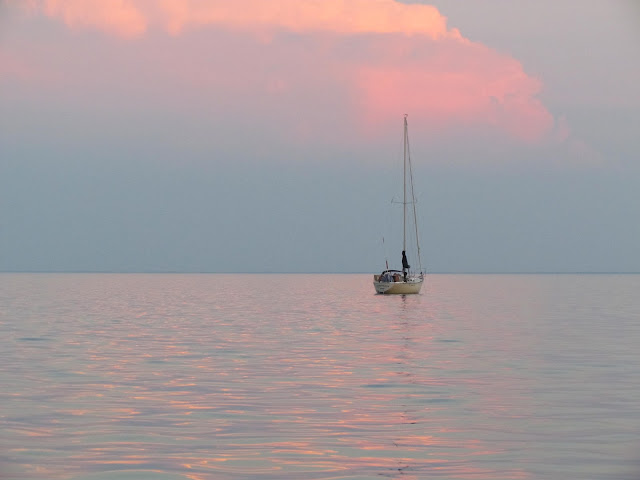 Within a half hour, without consultation or plan, without mishap or harsh words, Hilary and Whiskeyjack and the Bluenose were rafted and posing for pictures  as Melanie flailed the oars in Quack while firing her Canon. 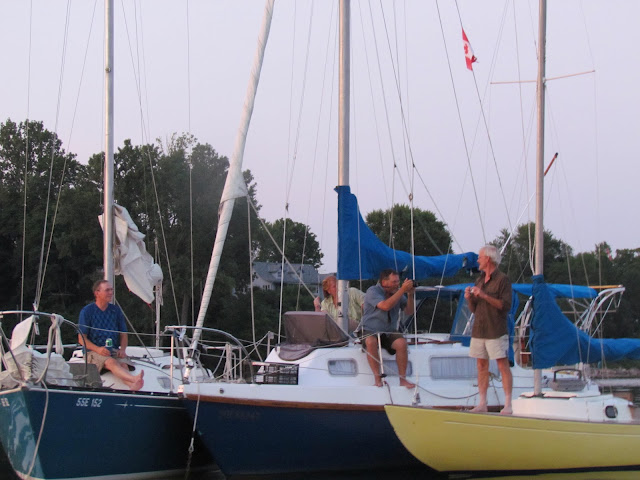 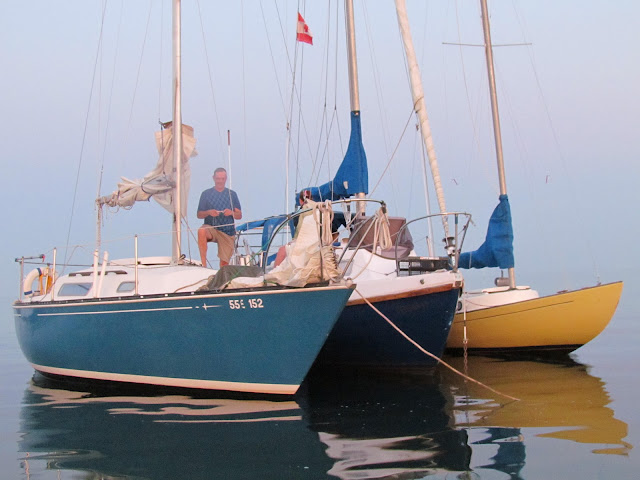 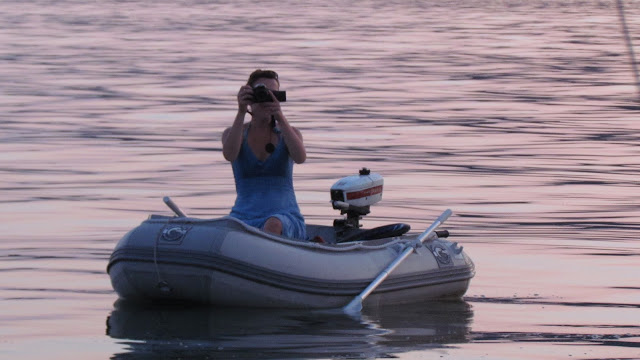 As the sun dropped below Wooley's Point we turned for home, retied to The Dock and shared dinner and beverages and laughs and photos and camaraderie.

People ask why we persist in hurrying from air conditioned offices to a small boat-smelling boat that is a long walk from the parking lot, lacking water and power and all manner of creature comforts...
If we have to explain it, you won't understand it anyway,  C'mon down and join us for a sunset.


And don't forget to "Talk the Dock"

Posted by Dock Six Chronicles at 16:08