I'm Down With OPB: Other People's Boats


(Scribbler's note:
Faithful readers,
I apologize for appearing to slack off and reducing content output in recent weeks.  With a new day gig, great sailing weather and a less than reliable wifi connection on the Dock,  I've been uh, researching (yeah, that's it, researching) more than writing.  However, life is now settling down, the humidity is more conducive to sweating over a keyboard, and I've got a whole bunch of new wordy-typy stuff and pictures to throw at you.  It's gonna be Postapalooza for the next couple of days, so sit down, buckle up and enjoy the ride.
Oh, and thanks for reading.)

One of my favourite authors , and a guy whose career arc I generally aspire to emulate is Burt "BS" Levy .  He's managed to make money writing about what he loves while, in his words, building a "career as the world's most shameless and successful racecar ride mooch."

The operative phrase in the previous paragraph is "...generally aspire to emulate..."  I'm not making any money at this scribbling thing, and I write about boats and wetheads, not cars and gearheads,   but it's generally the same thing.... sorta.

I DO have the shameless mooch part down cold.


Which is how I've managed to talk my way into rides on a couple of the new-to-the-Dock boats recently.

(It sure as hell wasn't my charming personality or stunning good looks.)

Ralph and Julie have truly swallowed the hook, and stepped up from their Siren to a Jeanneau Tonic 23.

This is an unusual boat, rare on this side of the Atlantic, although Jeanneau is a popular boatbuilder in France, part of the Beneteau Group since the mid 90s 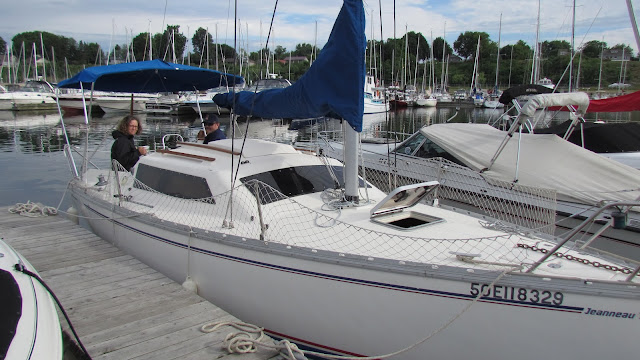 After admiring her lines for several days I managed to coerce the lucky owners to allow me aboard.  The layout is unusual for a small boat making excellent use of the space.


Instead of the typical v-berth/head/saloon/galley arrangement most often seen on North American designed and built boats... 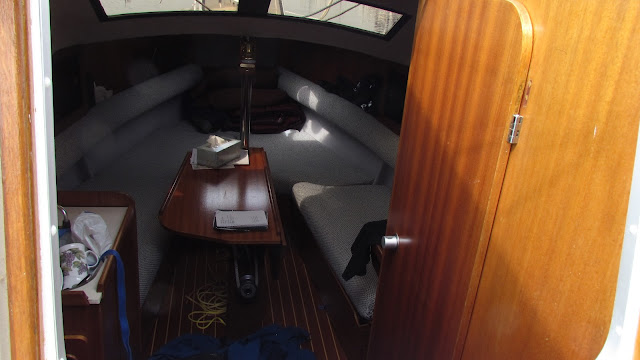 ...the cabin on the Tonic 23 is open and well appointed, with the head aft to starboard, the galley aft to port, a small nav station just ahead of the head, and a double size aft berth tucked under the cockpit.. the v-berth is forgone, with a large convertible forward saloon taking it's place. Headroom is about 5'8" 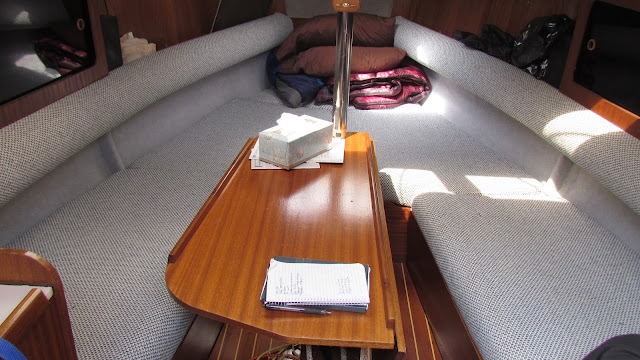 It was at least another decade before Hunter and Catalina tried similar layouts on their smaller boats.

The foresail is bent onto a CDI furler and the main sail has two sets of reefing points, and another unusual feature, a "dutchman" mainsail flaking system.  The mainsail is essentially strung to the topping lift, and as the main is dropped it flakes automatically- no lazyjacks required, and no cockpit full of fallen canvas. 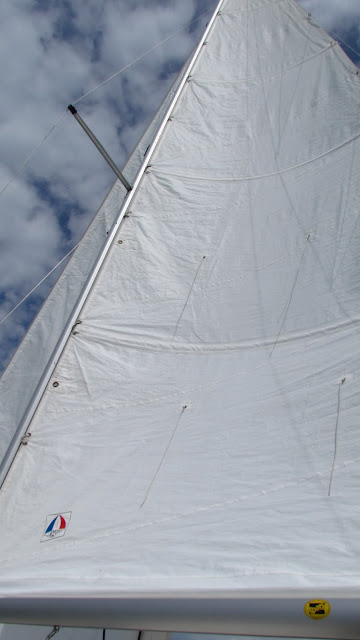 With a shallow draft aided by a drop keel and retractable rudder, the Tonic 23 is comfortable in a foot or so of water.
Auxiliary power is provided by a Honda outboard tucked into a well on the transom end of the starboard cockpit bench ahead and to starboard of the outboard rudder.  This layout has made docking ... interesting at times, but Ralph and Julie have adapted and overcome and have been sailing the heck out of their new ride. 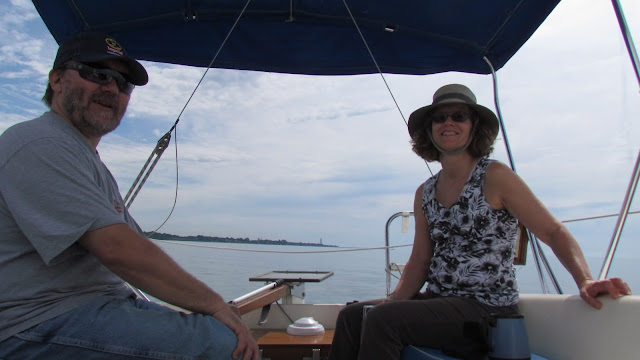 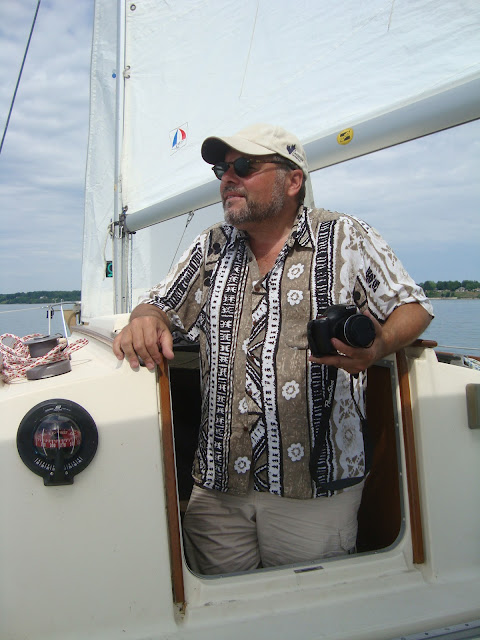 Spanning the two cockpit benches at the transom  is a small locker which houses the propane tank for the stove and the fuel tank for the outboard.  The included  tiller pilot can be easily installed on the mount on the port bench, and then quickly stowed when not needed.  Oh, that  fitting on the transom, between the rudder and the swimladder?

It's an oarlock.  In case you need to scull home.  The French are different. 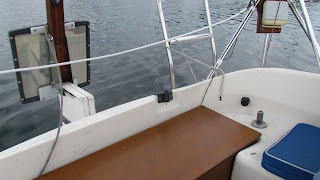 After being along for the ride when Hilary bought his C&C 24 and helping to step the mast, I had to complete the adventure with a sail.  She is a beamy boat, and quick, and Hilary is having a blast sailing her. 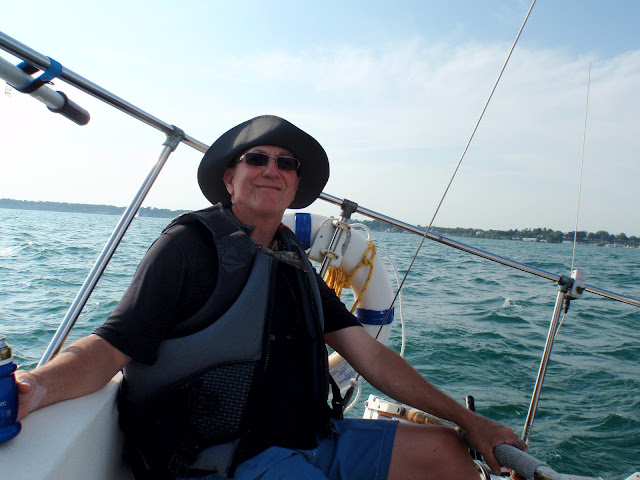 With a reef in the main and a small jib bent on, we were still moving along respectably in the 12-15 knots of breeze we saw on the water.

The layout on the C&C24 is comfortable, but quirky.  Performance is a C&C hallmark, so the luxuries take a backseat to speed.  There is no door on the head, just a curtain made of the same hot fabric as the cushions.  Headroom is about 5' but the companionway hatch is large, and the cabin spacious. 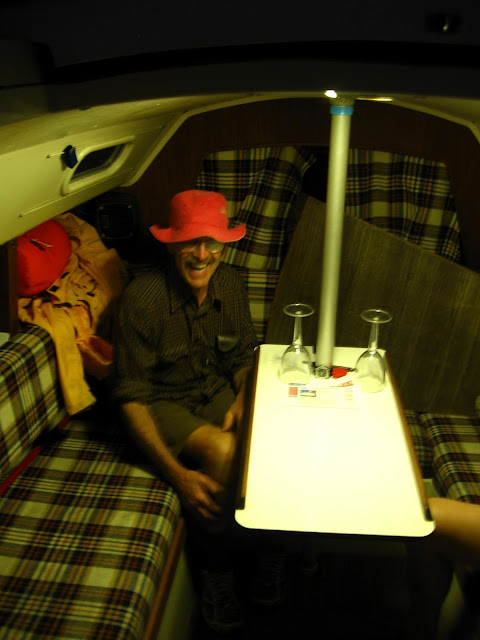 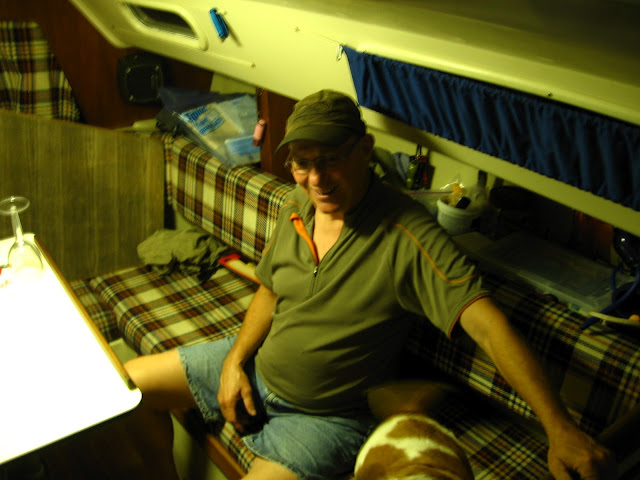 ... Allowing enough room for the owner, the dutchman, the dutchman's daughter, a humble scribbler and a dawg to sit  and enjoy a glass of wine. 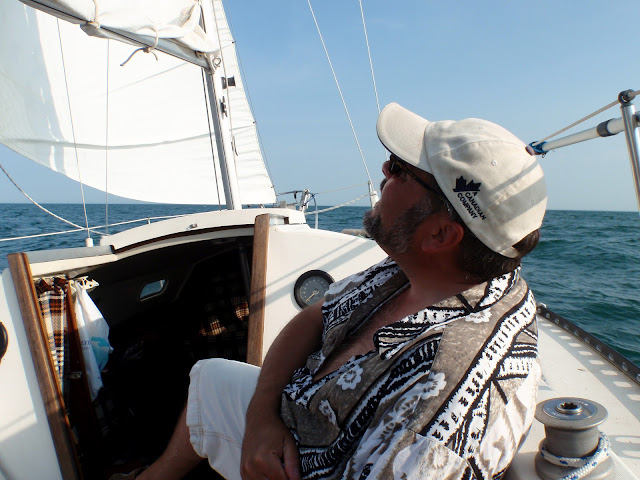 I got my turn at the tiller and enjoyed how responsive the boat felt, without feeling heavy or twitchy.  Move the tiller and boat moved.   No delay, no hesitation.  Weather helm was minimal, and once heeled, she stuck.
A fun boat to sail. 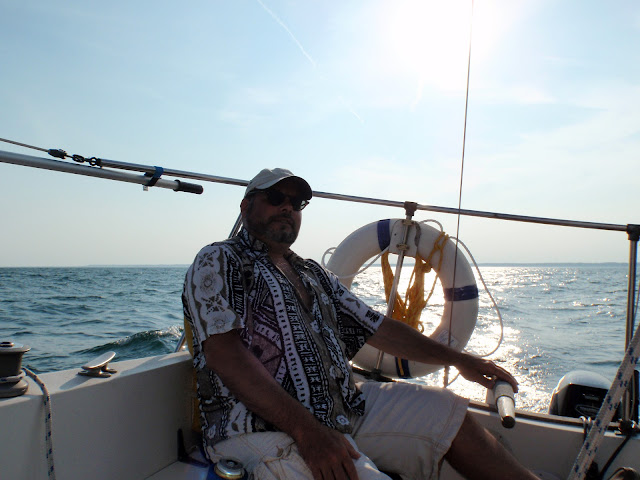 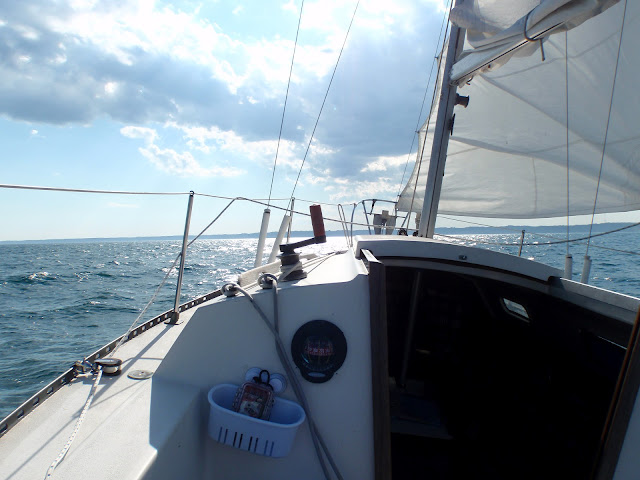 (Looking at these pictures, it has become apparent that I have a "sailing OPB" uniform.  Donations of new

More info on changes to this season's Dock line up coming up shortly.  Stay tuned.

Thanks for checking us out, and if you like what you see, please "Talk the Dock!"  Link us, follow us, or just tell your friends.
Posted by Dock Six Chronicles at 22:15