"I don't know when the road turned into the road I'm on...."
-Jackson Browne


Ahhh, winter, when a cold sailor's  thoughts turn to boats.  Refitting, rebuilding and repairing are top of mind,  but what if is too cold for epoxy to kick and paint to dry?  Then a sailor dreams, and some are seduced by the siren's song of a new (to them, at least) boat.

After a gut-check regarding the condition of his O'Day Tempest, the antipathy of his better half toward his Tempest, and his own boatsmithing skillset, Hilary asked himself three questions:
1. Would I rather fix, or sail?
2. Would I like to sail with my wife more often?
3. Can I find a better boat that I can afford?

There are a lot of boats for sale, and a lot of places to find them, and with lots of variety comes lots of analysis, and eventually Hilary's brain just plain locked up.

He contracted a case of analysis paralysis.

In an effort to effect a cure, Hilary fired me an email, asking for help choosing his next boat.

I was happy to assist.

I am really good at spending my own boat budget.

I am really, REALLY good at spending other people's boat budget.

As Hilary had discovered, there is a lot of misplaced optimism in the old boat marketplace.  Phrases like "sails new in 1998," sounds MUCH better than "15 year old sails due for replacement,"  and pictures in ads are accurate when they were taken...in 2004.  In the mid four-figure bottom-feeder end of the marketplace, there is a LOT MORE misplaced optimism, bordering on desperation... and in some cases crossing the border into the land of Outright Lying.  So, we narrowed down the options, and I tossed some new ideas Hilary's way.  Eventually, after a couple of  false starts and a few close calls and boats that didn't make the cut, Hilary thought he had found "The One",  so we saddled up and hit the road, heading NW to Sarnia.

Saturday dawned cold and sunny as we departed Stately Jones Manor.  The day remained sunny as we got to Sarnia, but the wind whipping off of the St. Clair River was COLD.  Before going to look at the BIQ (boat in question) we decided to grab some lunch and work up some last-minute boat shopping strategy.

More on that "strategy" part later.

Fed and watered, we continued on our quest.  Within minutes our prize hove into sight: 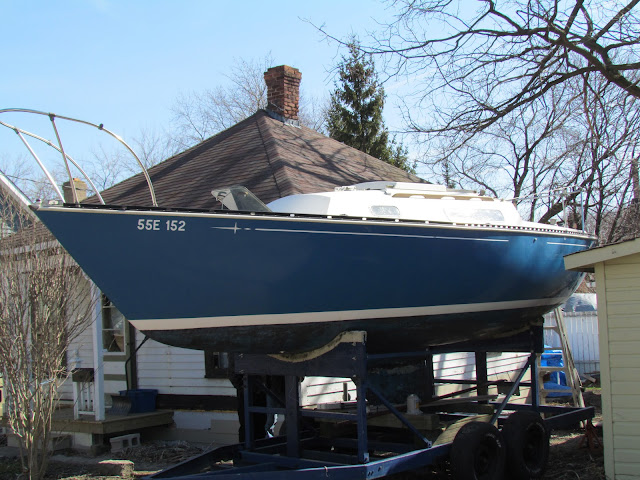 And still looks decent up close. 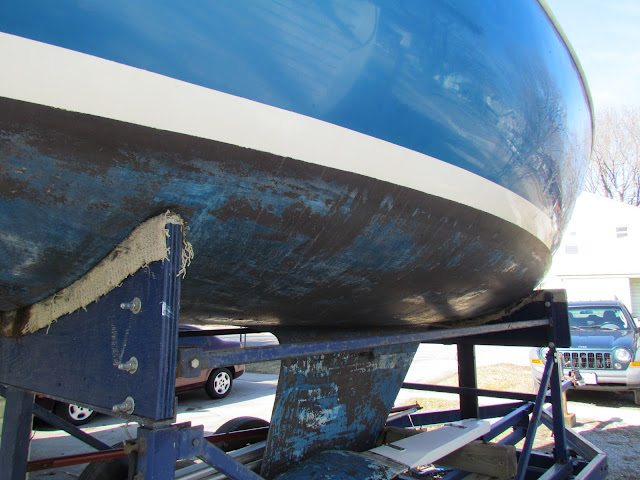 More headroom than the Tempest, and the interior is dry, clean, spacious and unsmelly. 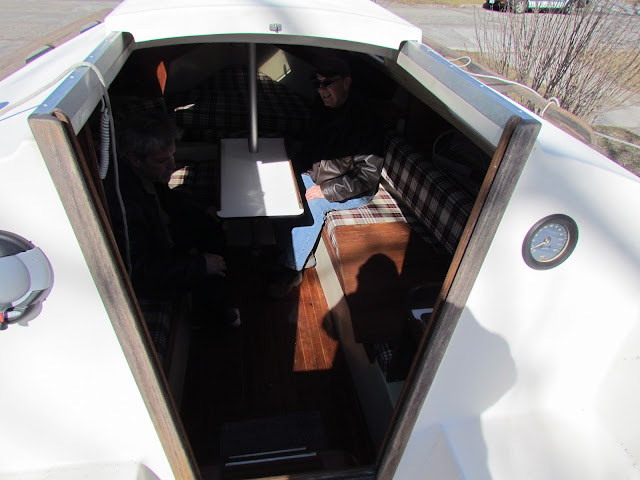 Cared for by only her second owner, the boat has a dry bilge, replaced compression post step, rebedded hardware and ports, a decent suit of sails, all documentation including owner's manuals for the boat and all components, and a Suzuki outboard which stated first pull and idled and everything.
Downsides?  Original plaid upholstery, original gate valves on through-hulls, but both the valves and upholstery are in good shape.  Simple rig, no traveller, no furler. Knotmeter is not functioning. The keel joint needs to be faired.  Wiring is in need of some sorting.  But that's pretty much the only real deficiencies, par for the course in this price range. 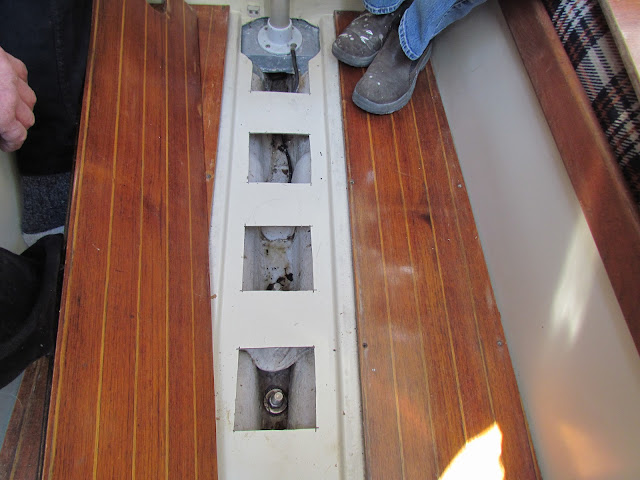 After a thorough tire-kicking, Hilary and I huddled for a confab.  I tell him what I think it is worth.  He tells me what he thinks it is worth. We discuss the art of negotiating.   Hillary set's an absolute, walk-away, not a penny more top end price that he is comfortable investing.  I agree that the figure he has in mind makes sense. Reassured, Hilary breaks the huddle and trots out to scrimmage with the seller...

And buys the boat.

For a few hundred more than his top end.

Huh?  What about all that hardball strategizing and negotiating tactics and stuff?

Hey, if everybody is happy with a deal, it's probably a good deal.

The next step is to beg, borrow or rent a truck capable of hauling the boat and included trailer home, and Hilary is good to go this season.

If anybody wants a low-budget O'day Tempest project boat, I know this guy...

Thanks for taking the time to check us out.  Please feel free to "Talk the Dock!"  Link us, follow us or just tell your friends.
Posted by Dock Six Chronicles at 12:24