"But it's gonna take money, a whole lot of spending money.  It's gonna take plenty of money to do it right, child..."
(Warning: Low-brow philosophical rambling follows.  This might be a good time to pour another drink and skip the next couple of paragraphs.  I would, except I've gotta write it.)
I figure every boat is a story.
Every story is different.   Some are long and boring, some are short and exciting, some are dog-eared from being well-loved, some are classics no one has paid attention to in years, and some are just pulp romances. Some are intriguing, but the cover is torn, the print faded, they've got some chapters missing,  and the ending is unknown.
"Legacy" was that kind of boat.
In October of 2009, SWMBO and I walked into a barn and fell in love with the story. 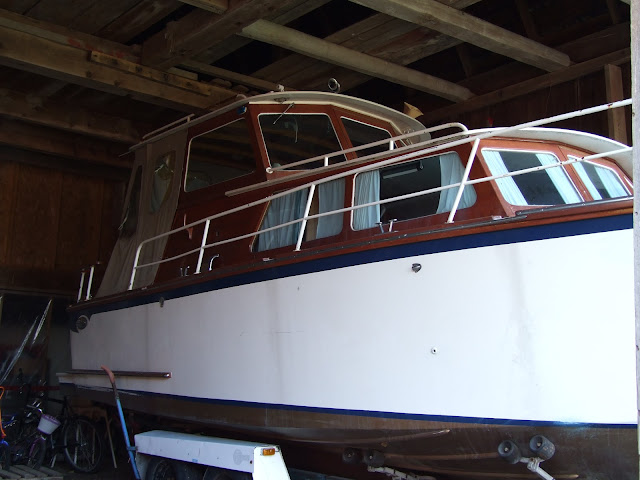 "Legacy" is a 25 foot(ish) mahogany ply cabin cruiser.  She is apparently a modified Herman Oldenburger design, homebuilt by a gentleman (hereafter known as OB, for Original Builder) in Burlington during the mid 1970s, and launched in 1978.  We were introduced to her by the builder's son ( henceforth dubbed BS, for Builder's Son)- as a child he had been involved in the build, and had inherited the boat when his father was no longer able to care for her.  The story that we got is that the original design was for a thirty-two foot long boat, but OB decided to reduce the LOA, so he asked his eldest son (not the son who introduced us to the boat but his older brother, to be known as BB, for Big Brother, because OB is already taken by, well, the OB-  don't make me have to diagram this) to redraw the plans, chopping 7 feet out of the length.  Just as Whiskeyjack is a big 23 footer, Legacy is a big 25 footer.  She carries almost five feet of freeboard at the bow (loosely,  for any non-boaters reading this, freeboard is the height of the deck above the water)  and three feet at the transom.  In other words, that swim platform comes in handy. 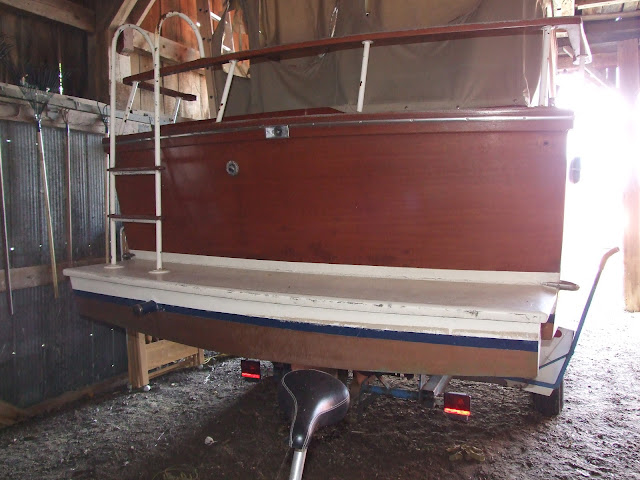 This is the first Herman Oldenburger powerboat design, and one of the few Oldenburger boats built in wood, I have ever seen.   There are a handful of Herman Oldenburger-designed sailboats on the Great Lakes, most executed in steel.   Here's what  I know about Herman Oldenburger, Naval Architect-  he may have worked in Meaford.
That's it.  And that might not even be correct.  If anybody has any more information on this largely forgotten figure in Ontario boating,  fire me an email, willya?

The mysterious Mr. Oldenburger seemed to know how to design a pretty but purposeful boat and OB sure knew how to build one.  I won't bore you with build details like hull thicknesses and center spacing for the frames,   I'll let the pictures tell the tale: 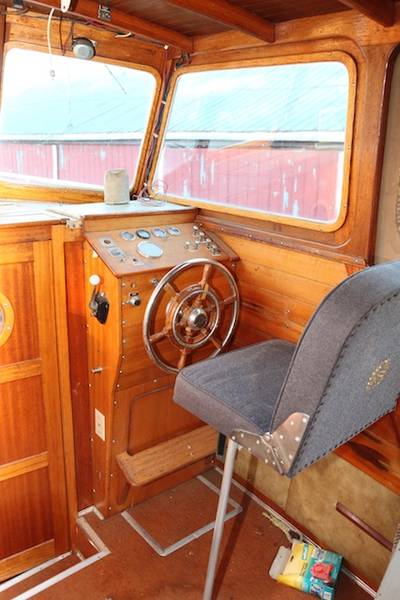 Inside the cabin, looking back toward the transom: 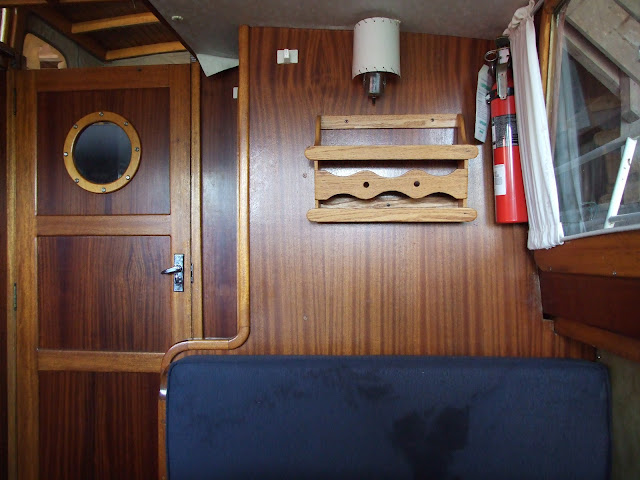 The galley, with sink and icebox: 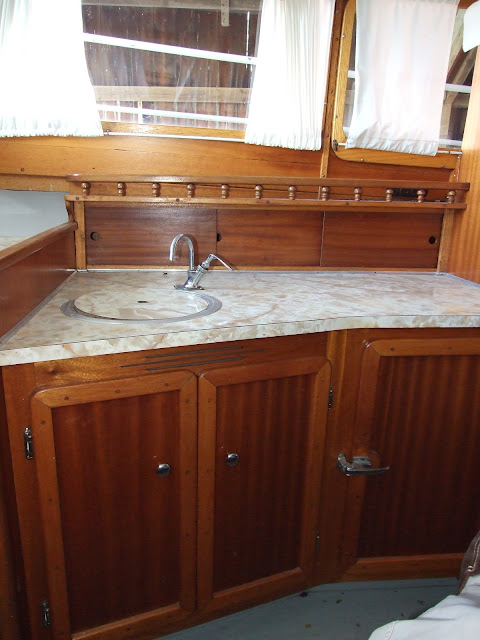 The companionway door, showing some of the quality of the woodwork: 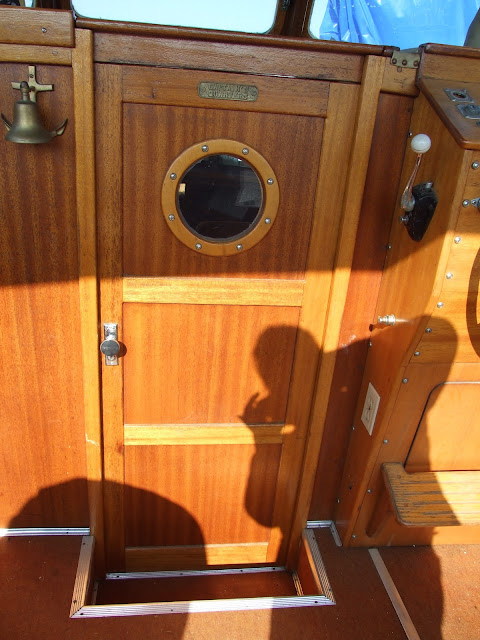 A head with a bifold door-  the only solid timber bifold door I have ever seen on a boat. 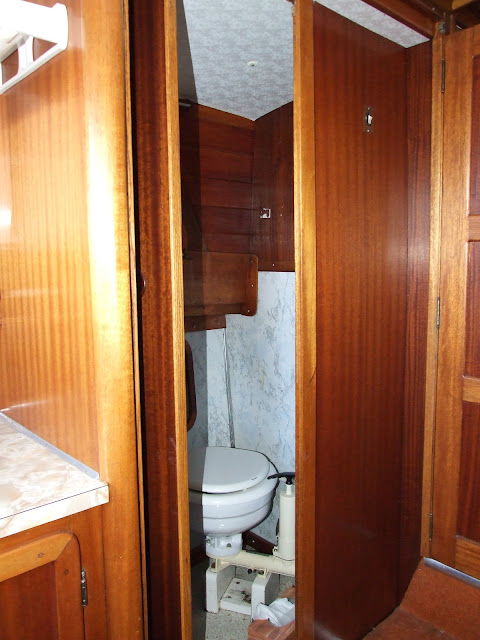 The drivetrain is a bit of a departure for a wooden cruiser.  usually, a boat like this would have a big gas v-8 or two stuffed under the cockpit sole ("back floor",  for you lubbers) with a driveshaft or two running back to a propeller or two.  OB took a different path- he installed a four cylinder diesel engine BACKWARDS, with the driveshaft running forward toward the bow.  To prevent the propeller from coming out under the pointy part of the boat, which would be, erm, uh, wrong, a v-drive is installed .  A v-drive is essentially a very simple transmission- using a couple of gears it allows a shaft pointing forward to transfer power to a shaft pointing backward.  Below is a picture of the v-drive taken from in front and looking back. 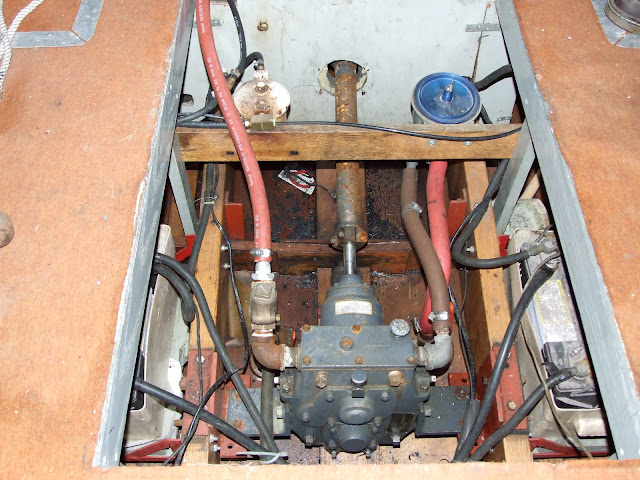 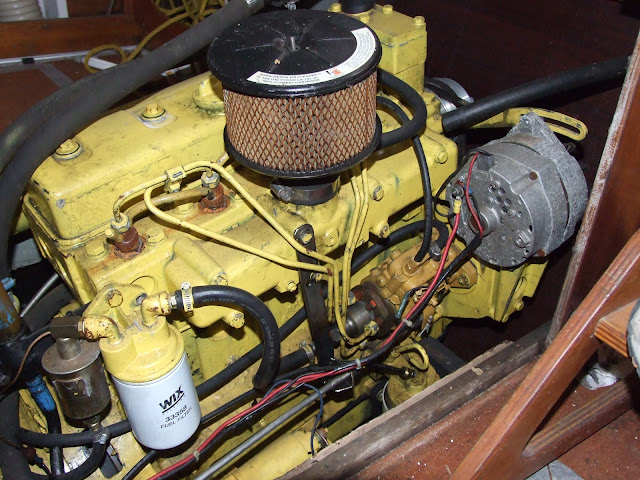 All of this front/back stuff means that rather than fitting the engine under the floor, the engine is mounted aft at the extreme rear of the boat, and covered with a house.  The upside is that the three quarters of the engine is very accessible for servicing, the cockpit floor can be lower, the engine weight can be moved aft, and the propeller can be horizontal, rather than inclined, which is necessary with a conventional inboard design.
Other boats: 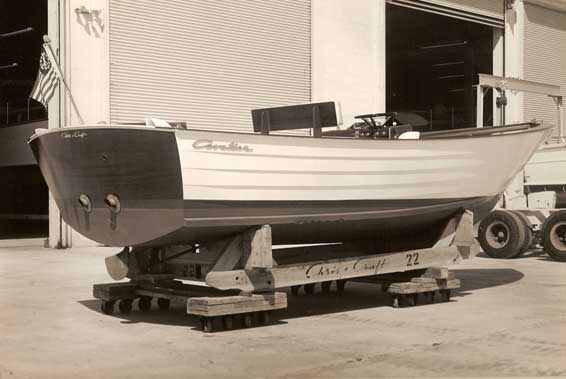 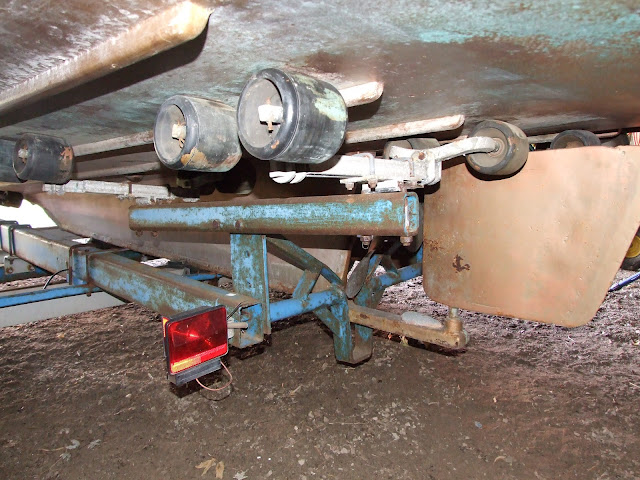 See what I mean? Yes, there is a prop in that picture.  Look to the left of the big bronze coloured flappy thing, sort of in the center of the picture.
A flat prop means a more efficient prop at low speeds and easier maneuvering in reverse.
Anyboat,  Louise and I came to an agreement with BS, and Legacy was delivered to Bridge Yachts (our boatyard of choice) on November 1, 2009.   Here is how she looked when she arrived: 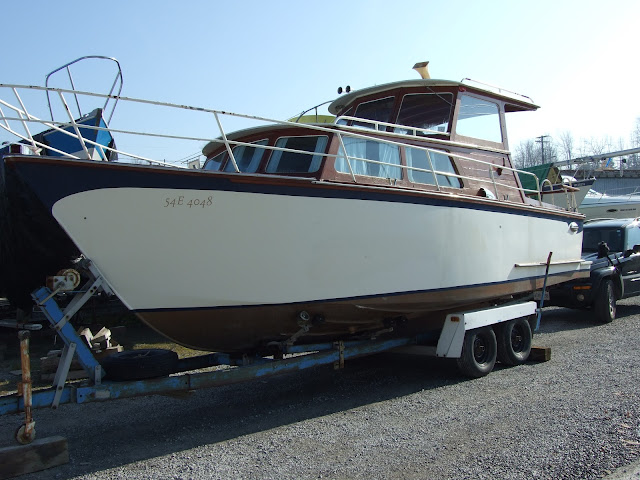 Nothing much happened until the spring of 2010, at which time we uncovered her and installed the canvas we had repaired over the winter. 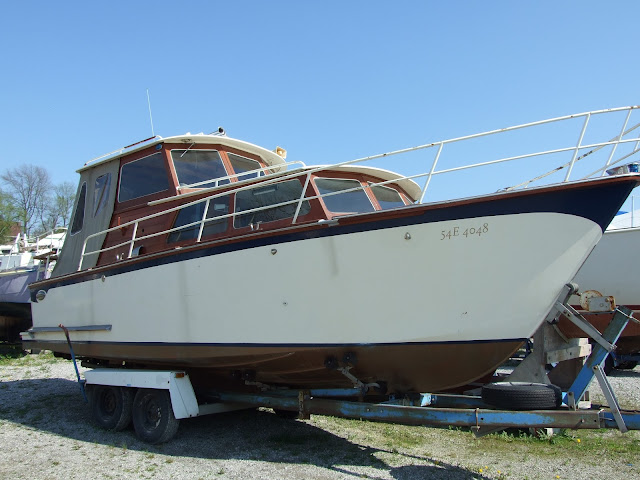 Whiskeyjack's refit was first on our agenda.  Once she was in the water, we attacked Legacy's punchlist:  clean the upholstery, cut out and repair rot, sand and fair hull, sand deck, new paint, new varnish, new curtains, new signal mast, new cockpit flooring, ...
She's not looking too bad.  All she needs here is some striping and registration numbers.  oh yean and sanding and painting the rail.  Oh yeah, and 6 more coats of varnish.  *sigh* 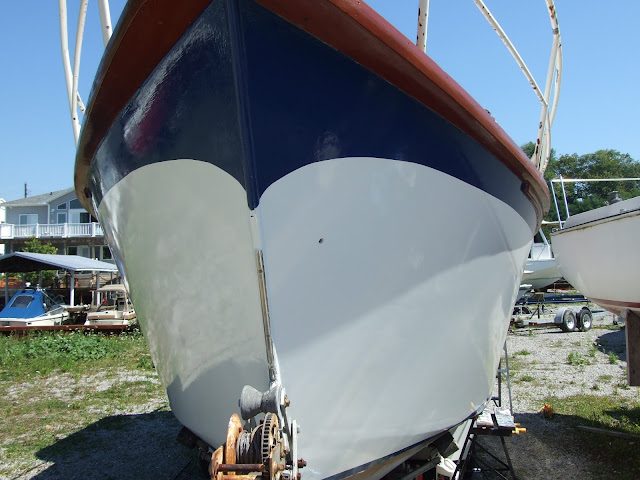 Is there anything sexier than a varnished transom? 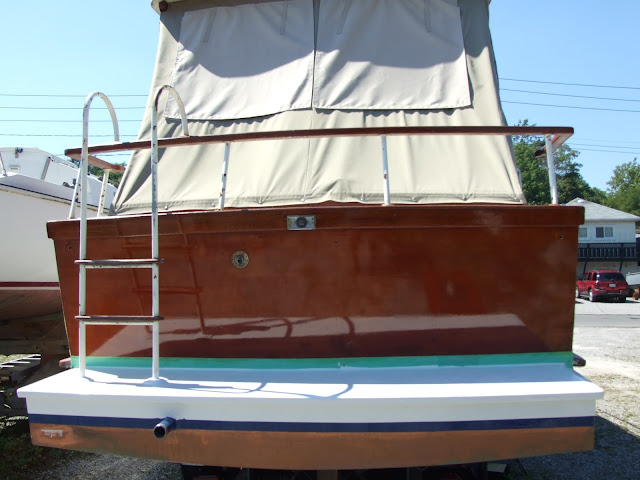 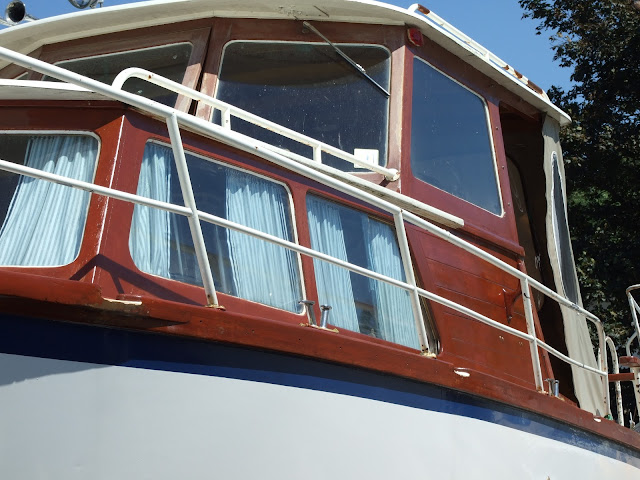 SWMBO put some serious hours into making sure that all the nicks, dings and brusies were faired out of the hull.  Thanks, sweetie! 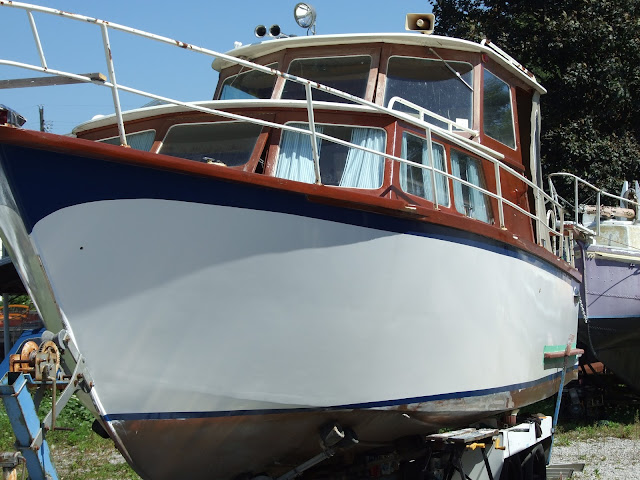 Most boat owners will tell you that wooden boats are the  work of Satan. Too much maintenance, too much weight, too fragile, too leaky, just plain too everything.  So what the hell made SWMBO and I think that taking on Legacy was a good idea?
Go pour yourself another drink, while I figure out how to explain what happened.
Posted by Dock Six Chronicles at 16:43