True WW II story:
Hiroo Onoda was a lieutenant in the Japanese Army who was stationed on the Phillipine island of Lubang in the final days of the war.  Hostilities ended on  August 15th, 1945, but not for Lt. Onoda.  The lieutenant became the poster boy for not getting the memo.  When Japan surrendered, Onoda was in the hills running a guerrilla campaign without the benefit of communications; he didn't know the war was over.  He refused to believe that Japan surrendered...
... For 29 more years.
Lieutenant Onoda finally came out of the jungle in 1974.  He had been declared dead in 1959, because numerous searches had failed to find him.

He would have been right at home in our backyard this spring.

All the rain has meant that:
a) the boats are still on the hard,
b) the grounds of stately Jones manor are officially out of control and off the chain,
c) when the rain does stop, we have to prioritize what gets done and try to fit it all in around our real jobs, and
d) the neighbours (non-boating gardeners) have been giving us the "your-overgrown-eyesore-is-lowering-property-values" look.

When the sun finally broke through on Friday, I had to mow the lawn, since the lawn was now taller than the mower. Which led to fixing the lawnmower. And the trimmer.  Which led to three trips to the hardware store, one trip to the gas station, a stop at the beer store and a run to the pharmacy for more allergy meds.
While wasting four hours mindlessly mowing, and the mower choking on grass and stalling, and restarting the mower, and stalling again,  I had time to think.  I wonder how much it would cost to pave our 1/4 acre lot?
Maybe just gravel?  No, that would still need to be weeded and raked.  Sand?  NO!  The neighbourhood cats would be overjoyed.  SWMBO would not.
Whne the deed was done, we celebrated by heading down to the Dock to let the dogs have a run and see what was new.
The water level is WAY up: 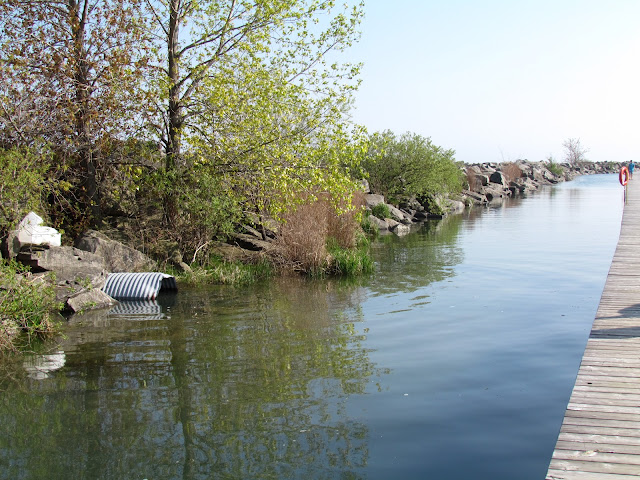 The Dock is definitely showing signs of life: 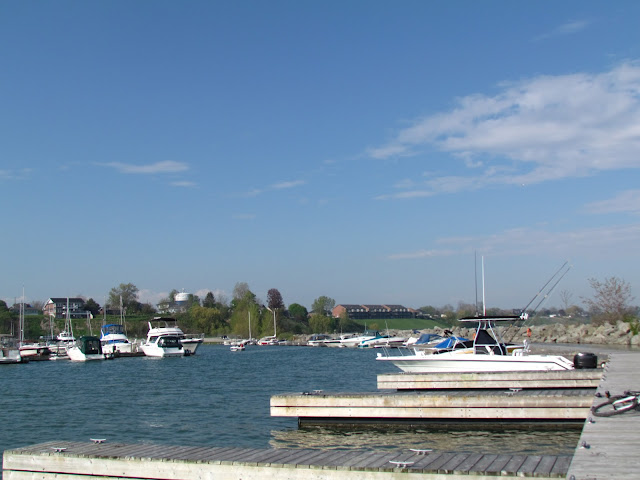 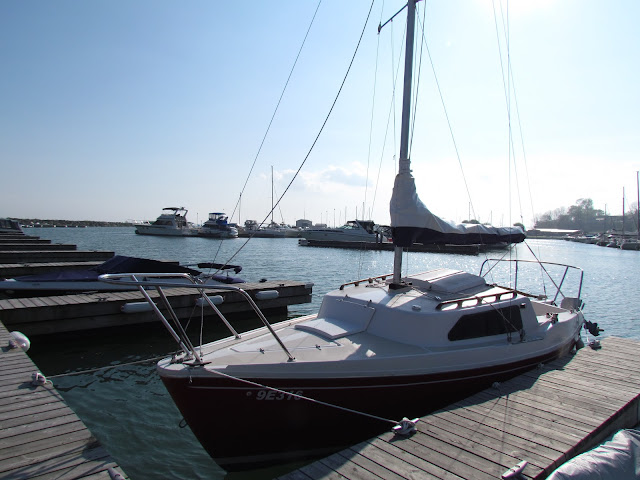 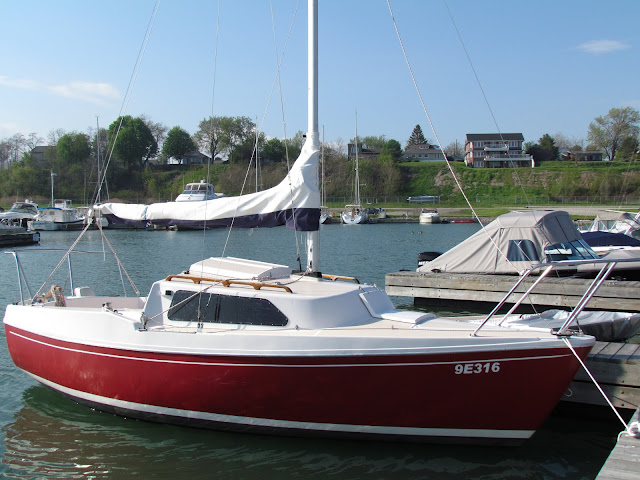 James has apparently decided to sacrifice power and speed for fuel economy: 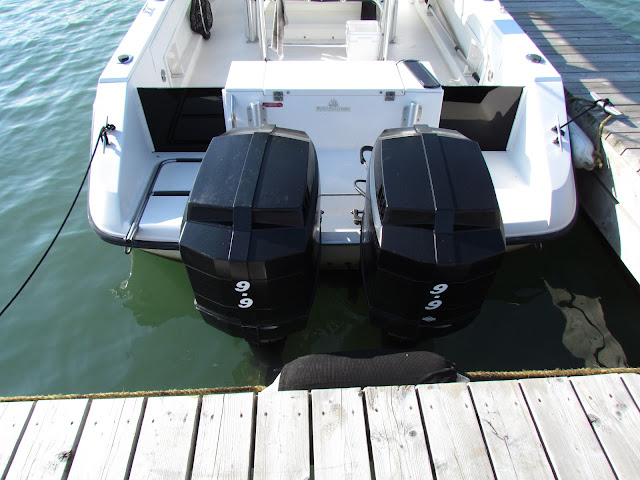 Yesterday was unprecedented- a SECOND dry day in a row!  Woohoo!  NOW we can get some boat work done.  We loaded up Lady  Liberty and headed to the yard.  Time to do some installing.  My fingers are crossed at this point.  All of the furniture I built this winter was done off-site, with no measurement checks along the way.  I (kinda sorta) THINK (read: hope) my measurements were accurate (enough), but I have as much confidence in my accuracy as Lindsay Lohan's lawyers do in her sobriety. 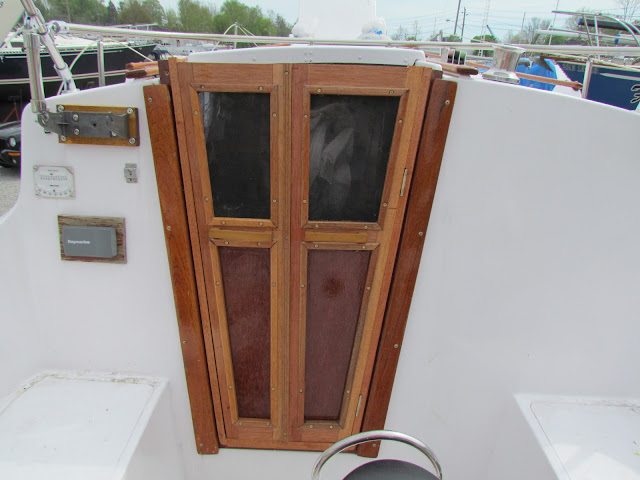 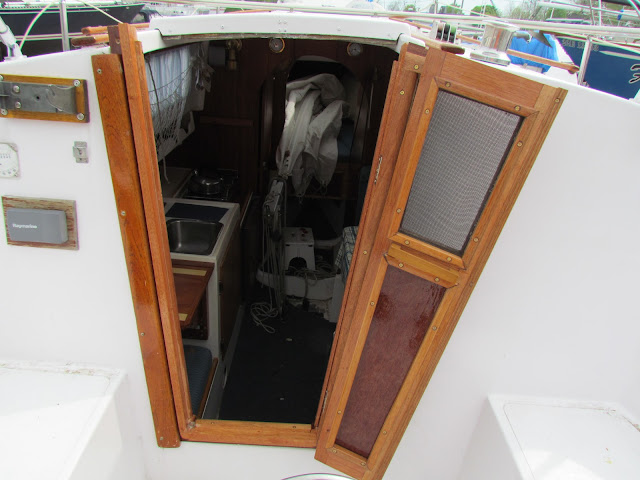 Now it just needs to be trimmed to fit the curve of the hatch. 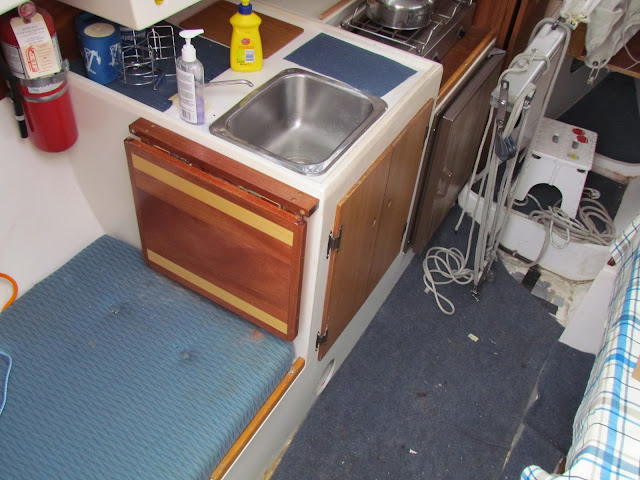 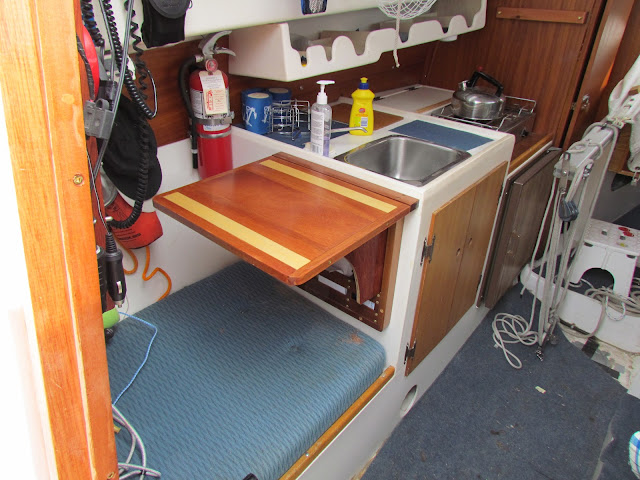 In the background, on the bulkhead above the stove, you can see the new kniferack, which fits.
Three for three! 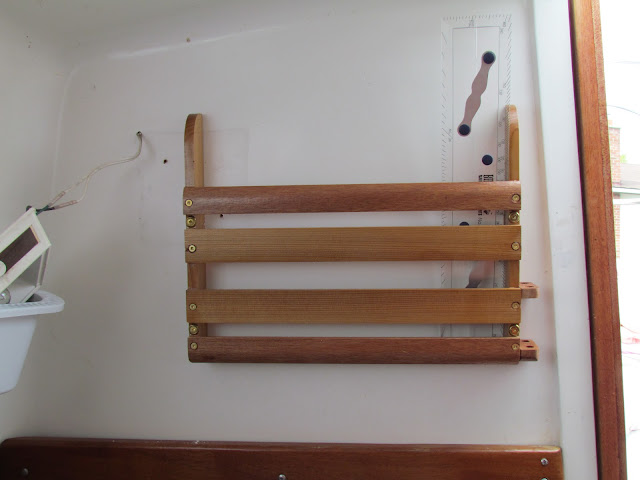 I have to relocate/replace a light, but replacing those ugly things was on our list anyway. 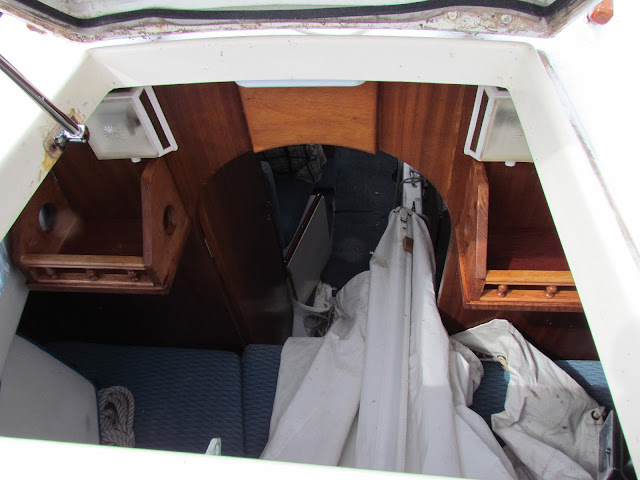 We pulled out all the cushions to bring them home for a good cleaning, and the door is marked for trimming, and I have the final measurements I needed to finish off our low-buck removable helm seat.  Progress feels good.  SWMBO and I came home, unloaded the Jeep and shared a celebratory beer and congratulations.  Tomorrow, we tell each other, we'll get the bottom painted, and the rest we can finish on the water...

And now it is tomorrow, and it is raining.  Again.

Thanks for checking us out.  Please feel free to "Talk the Dock!"  Link us, follow us, or just tell your friends.
Posted by Dock Six Chronicles at 13:51