"Everybody's got a story..."
-Amanda Marshall


If you can click past the endless played-out cat memes, genealogy sites, facebook, and you don't get sucked into YouTube for hours on end, you discover that there are actually some interesting places to visit out there in the WorldWideWeb.  Like one I stumbled over recently, Humans of New York .

The concept is genius.  It's nothing more, and nothing less, than stripped-down photojournalism:  One man, one city, one camera, one subject, one interview, one question, one story, repeat. Every day.

One interview struck home with me last week. "I’m a philosophy professor."
"If you could give one piece of advice to a large group of people, what would it be?"
"Never make an exception of yourself."
"What does that mean?"
"People like to make exceptions of themselves. They hold other people to moral codes that they aren’t willing to follow themselves. For example, people tend to think that if they tell a lie, it’s because it was absolutely necessary. But if someone else tells a lie, it means they’re dishonest. So never make an exception of yourself. If you're a thief, don't complain about being robbed.

I have made an exception of myself.

Boat projects, even small boat projects, are usually labour-intensive.  Because I have done a bunch of them, and because I am more than happy to share my opinion (solicited or otherwise), fellow boaters occasionally ask how to do something...
...before I am able to tell them how to do it anyway.

Usually, halfway through explaining, for example, that the only way to finish brightwork is a  multi-coat repeatedly sanded varnish schedule, the enquirer interjects, "Isn't there an easier, cheaper, quicker way to do it?"


My inflatable adventures over the last couple of seasons demonstrate how I have made myself an exception.

Last year, Quack  needed a floor.  So, I quickly laminated some ply, slapped some epoxy on the exposed on all the surfaces, sloshed some varnish over it, screwed it in place, and, as the french say, Vwuh-Lah, I had me a new floor. 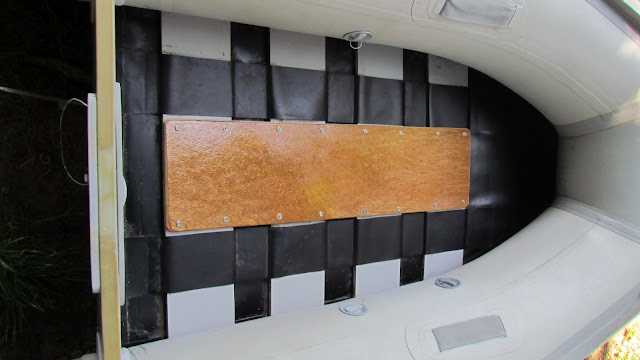 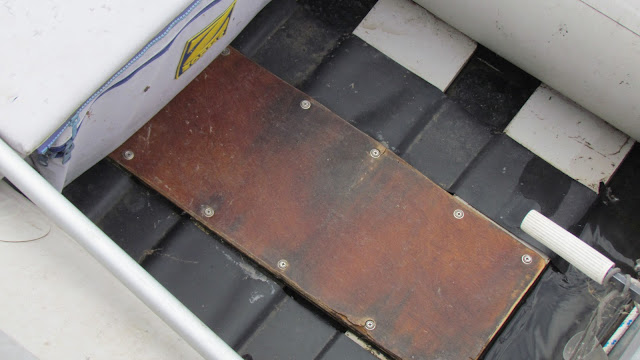 So, I spent the time and the money to do it...again.

I figured out that part of the issue was that the floor was screwed into place, an issue created because I was determined to work with scraps on hand.  For Floor 2.0, I decided to make a full floor that would be freefloating, heldp in place by the tubes.  So I measured, and cut, and sheathed it in fiberglass cloth and wetted it out and filled it... ...a durable and practical floor.

Next item on the punchlist was a tiller extension for Quack's doughty little outboard. I repurposed a piece of scrap aluminum tube, formed the ends to fit the flat stock tiller, drilled and riveted the new extension into place, and ...

It works great, and allows stand-up piloting, very nice when one has a load of dogs and water jugs.

So, one dinghy, two projects, two successes.  What of the newest member of the growing fleet?

This demonic deflating dinghy is proving to be my Moriarty.

Look at her up there!  Plump. Firm. Ready for action, no?

Not Honk's fault, really.  I have no one and no boat to blame for my making an exception of myself.

See, I found the leak.
And I patched it.
With a patch that was too small.
Unable to withstand the pressure, the patch leaked.
So, I patched the patch.
The patched patch leaked.
So I slathered it in sealant and covered it in duct tape for a few hours and pulled off the tape and...
...It leaked.


So I tore off the patch over the patch and then tore off the original patch and sanded and cleaned and repatched...
...and instead of waiting the necessary 24 hours for the patch to fully cure and harden, I reinflated to full pressure after 6 hours.

So I deflated the offending chamber, slathered sealant on, covered it in duct tape, let it cure for 24 hours, uncovered it, reinflated and ...

It looks like hell and it leaks, albeit more slowly.

The patch is still too small, and the adhesive area inadequate.

(Small and inadequate- welcome to the story of my life.)

Tomorrow I will have to make the time and find the money to do it again.

This time, it is obvious I need to pull the "Zodiac" label off the tube, as the leak is actually a previously patched puncture just off the lower right corner of the label that was inadequately patched originally.   With a bigger patch, a properly prepared surface, the  patch firmly affixed to the tube with no air bubbles, longer cure time for the adhesive, and no inflation until fully cured,  I expect that I will have an inflatable that remains inflated.


So, have I learned anything from being exceptional?

I am not special.  I don't get any luckier than anyone else.  If there aren't shortcuts for anyone else, I don't have a Thruway either.

And I guarandamntee I will be tempted, repeatedly, in the future to make an exception of myself.

Once in a while, I will likely give in.

You'll probably hear about it.

Posted by Dock Six Chronicles at 12:52