I wasn't looking for another project.

We didn't need another dinghy.

We are, however, sailors, and that means that rationality and logic go out the window when opportunity beckons. 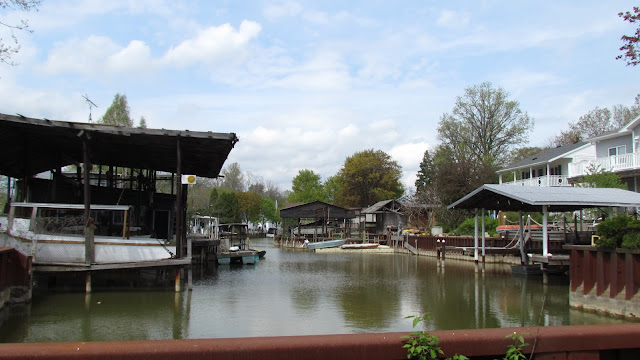 Mentioned in passing that he had an old Zodiac that he wanted to get gone.

Inflatable dinghies are great boats- they are light, stable, and carry a big payload.

They are, however, as the name implies, full of air, and are only usable when inflated, and will only remain  effective as long as aforementioned state of inflation lasts.

At some point in the boat's life it will develop an annoying habit of refusing to stay all full of air, preferring instead to slowly exhale it's contents, often from difficult to detect defects.

Which was, apparently the state in which Rod's red ride now reposed.

Making it the perfect candidate for another quixotic Dockside quest.

Mostly complete, needing only a threaded air valve (the valve from our unused-in-two-seasons Airhead tube fit just fine)  and a good cleaning.

It breaks down, rolls up and stuffs into it's own bag in a package small enough to stow in Whiskeyjack's  quarterberth, and, with a total weight under 50 lbs., it is relatively easy to lug down the Dock and on the deck.


Right, then- let's see if this boat will float.


I opened the bag, unrolled the boat, slid in the floor slats, blew up the cocktail weenie seat and two flotation chambers, and in less than ten minutes had a floating boat.  After a quick scrub...

Well, okay, no one said this was going to be easy.

As luck would have it a crew of crash test dummies was on hand to assist in testing.  Hilary's daughter Sarah and her friends were enjoying the sun on the Dock, and happily agreed to seatest Honk.

I probably should have mentioned the "it leaks" part.

With Hilary towing Honk behind his C&C and I following behind as a photoboat  we headed to the beach.

The test crew clambered aboard Honk and set out.  I would occasionally yell for progress reports.

In retrospect, radio communication might have been more effective... 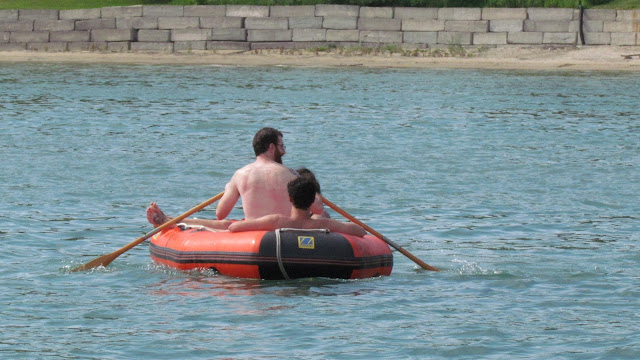 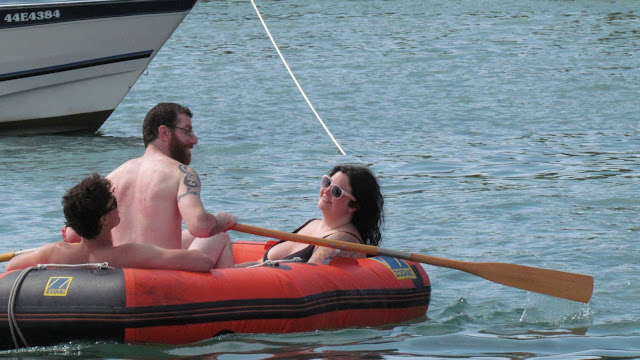 Me (to myself):  " This is an exercise in frustration."

TCoH (to each other):  "Can anybody figure out what the short fat guy is saying?" 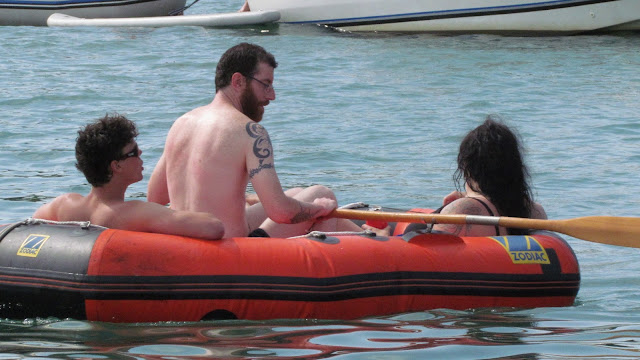 Me:  "Any hissing, or bubbles?  Anything to see or hear?" 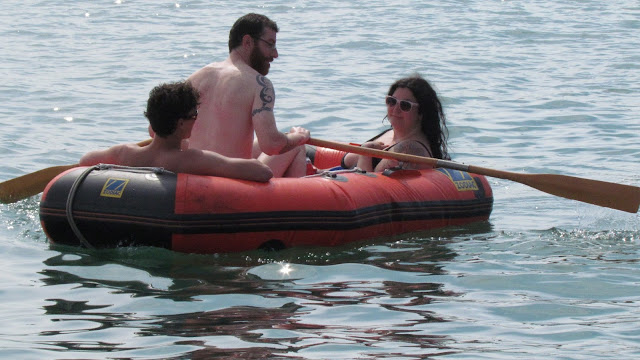 TCoH:  "Hey, is this thing supposed to be getting softer?" 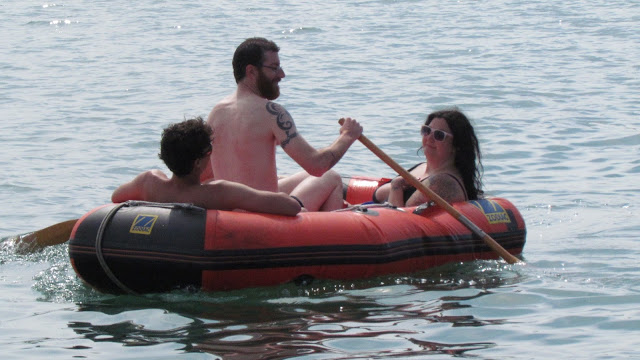 Okay, the bad news is, the leak remained undetected.

The good news is, we discovered that it tows fairly well, rows fairly badly, and can be deflated and stowed on the foredeck of Whiskeyjack while on the water.

Next episode of  This Old Dinghy:  Finding and sealing the leaks.