"I haven't yet, but there's still a chance I might..."
-The Mighty Mighty Bosstones

So, in an effort to get more folks like us involved, I'm going to let everyone in on the secret.

Come on down the Dock.
Or any dock where you see masts.
Bring rum.
You're in.

Nobody is more happy to show off their boat or have new crew than sailors.
Especially me.
See, greenhorns have no idea  how a boat is supposed to sail or look  or what proper sail shape looks like, so they have no idea just what a hack I am.

(It occasionally drives SWMBO nuts when I press-gang strays without notice, but she is great at rolling with the punches, and finding a way to stretch a half box of crackers and a stick of cheese into snacks for four.)

It was a rough day, rougher than we'd like for sailing with newbies, so we simply soaked up the atmosphere on the Dock, and  talked about boats and sailing and life in general and met some of the other characters, and generally proselytized like boat missionaries.

Gavin and Sylvia made a guest appearance and added a couple of hallelujahs and amens. 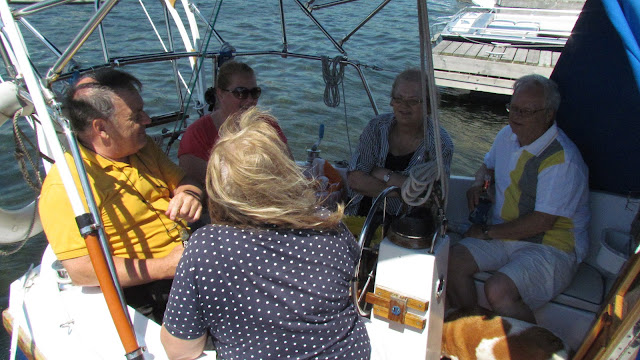 It worked.  Lyn and Leigh spent the next few days scouring the classified ads looking for boats, and the next weekend they inspected a Bayfield 25 for sale here in the Marina...  and brought dinner.  And rum.
And we brought Jack and Melanie to further sink the hook. 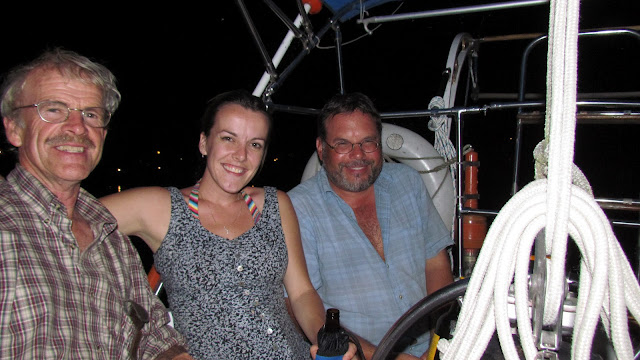 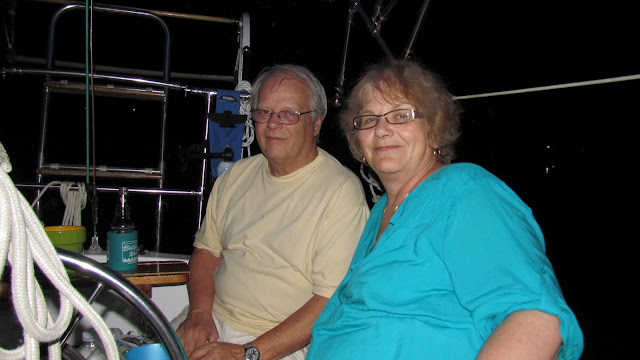 Lyn and Leigh will be hull-wet by the beginning of next season.

A couple of weeks later Leigh came out for a sail, and we shanghai'd Ed into joining us.  The wind wasn't heavy but the Bay was choppy.  So choppy that we managed to break some of our high quality polycarbonate  dinnerware.  Yes, Virginia, you can break stuff at 3 knots. 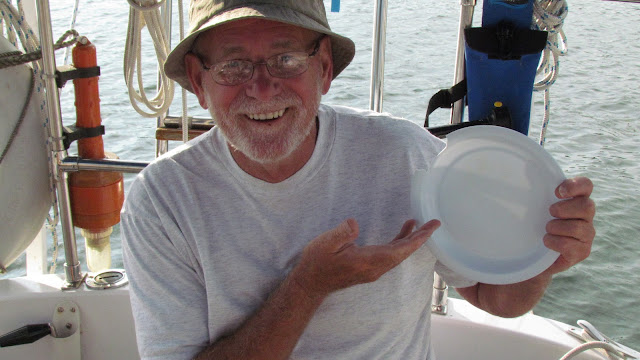 A  couple of weeks ago I bought a solar shower to test and review.  Basically it is a black 5 gallon bag of water with a hose.  To use, you fill the bag with water, leave it in direct sunlight and a few hours later, you have warmish water.  The best only place on Whiskeyjack  to lay a solar shower is atop the cabin.
What does this have to do with newbies?

Last weekend Marco and Dee came aboard.  Neither had sailed before, but both were enthusiastic.  The wind was optimal, so we  set out.   With detailed instruction, the newbs hoisted main and unfurled the genoa and trimmed the sails and we were moving!
As we heeled to 30 degrees, I realized that the forgotten solar shower  had been neither stowed nor secured. It walked across the cabin top like a water-filled slinky, flip, flip, flip, and then FLOP! jumped over the side.

Retrieval was a non-starter as it was quickly lost to sight in our wake.

That was the only mishap of the afternoon and we had a great sail.  Marco enjoyed himself and really "got it."... 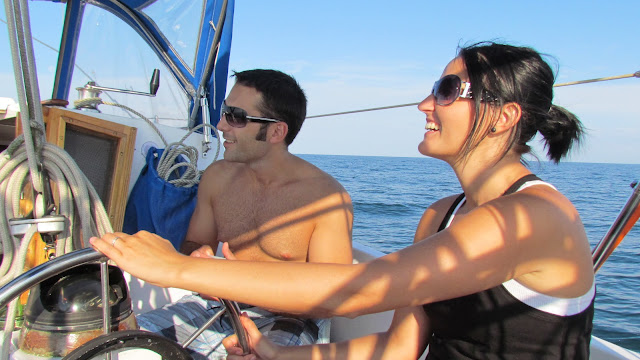 ...but Dee is well and truly HOOKED.  Marco and Dee are apparently going to be sailboat shopping soon. 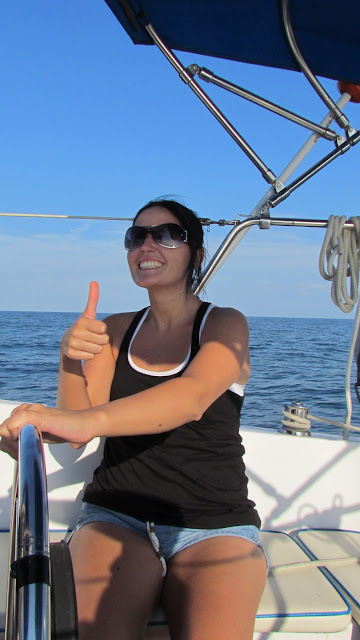 So, how do you start sailing?  Go where the masts are.  Bring rum.  Soon you'll be grinning too.

And "Talk the Dock!"

Posted by Dock Six Chronicles at 10:02