A Very Big Month, Part One.

"I'm using up the time but feeling fine, every day..."
-Rare Earth


Canadians, by and large, are a people of general order.  We like things kinda neat and tidy and organized.  We're not as crazy about it as the Swiss, as efficient at it as the Germans, or as Draconian about obedience as the Singaporeans, but we're sorta fussy about stopping at stop signs, wiping our feet, sorting our recyling, stuff like that.
Take our holidays, for example.  No odd dates like July 4, or May 5, Canada Day is July 1.  First day of the month, bang, done, back to business on July 2. Most towns and cities take a low-key approach to celebrating the birth of our nation- fireworks, maybe a car show or somesuch sort of thing

Here in Port Dover, however, Canada Day is a Very Big Deal.

On the Dock, Finn got into the spirit of the day.  (There's that damn shirt again.) 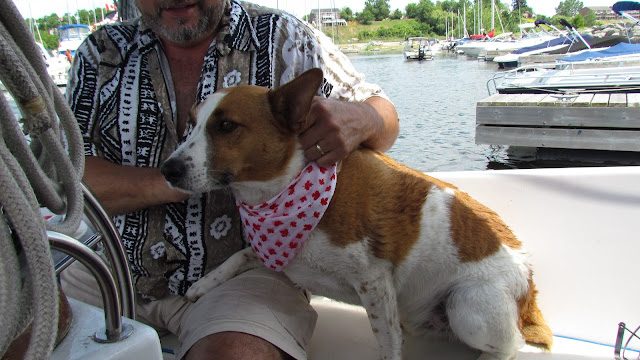 The day kicks of at 9:00 am with the Soap Box Derby. In this age of helicopter parenting and PlayStation addiction I am heartened by the large turnout of young  old-school gravity racers every year, and the scores of enthusiastic fans who turn out to cheer them on.

By 10:00 am, boats were lining up for the boat parade up the River, showing off their best red-and-white decorating skills.  With some serious cash (hey, a hundred bucks is a hundred bucks!) on the line for the winners of the decorating contest, some boat owners pulled all the stops. 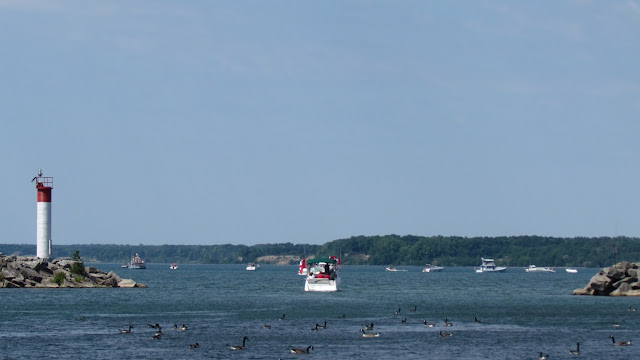 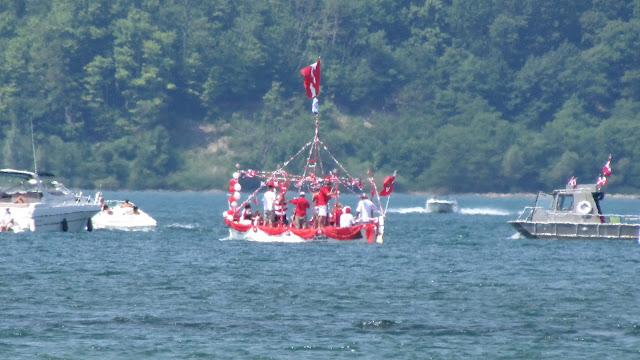 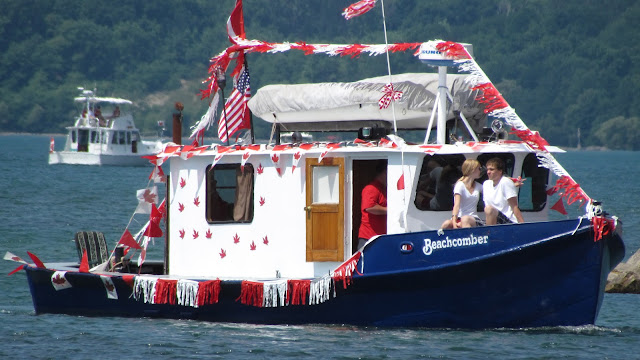 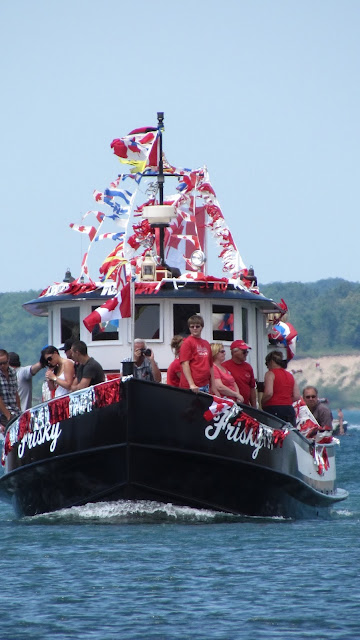 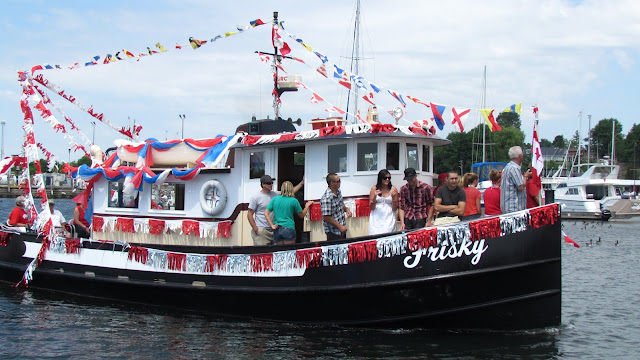 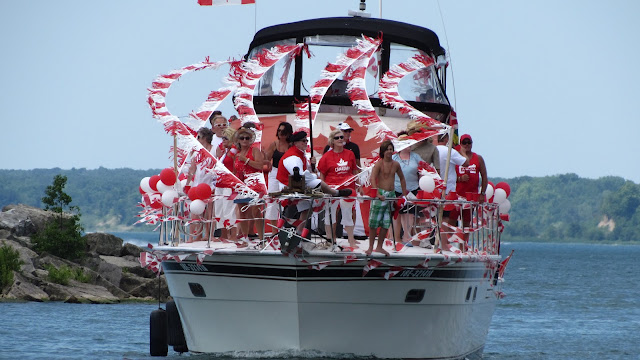 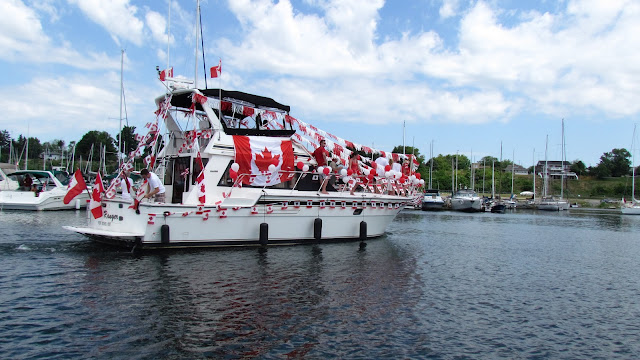 The boat parade is followed by a terrestrial "Callithumpian" parade down Main Street replete and complete with floats, marching bands, service clubbers in funny hats riding around in very small cars.

We went out for a mildly calamity-filled sail (stay tuned- more on that in a later post,) with guests, went for a swim, and returned to the Dock for a delicious dinner cooked by a capable Trevor, 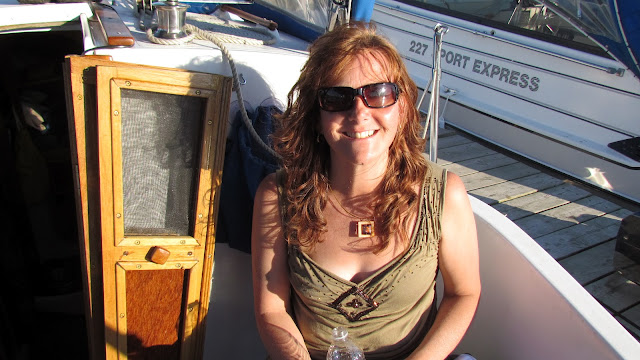 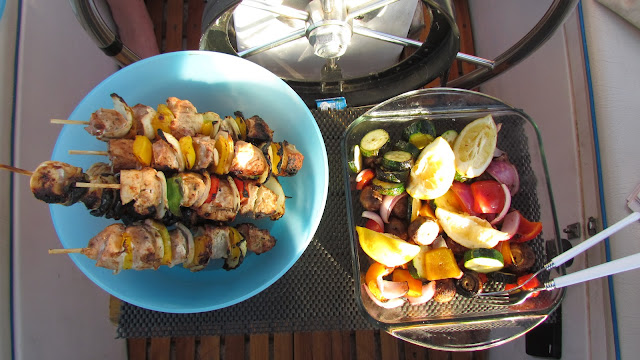 Then as twilight turned to dusk (or is it vice versa?)  we cast off and putted out into the Bay to watch the fireworks display. 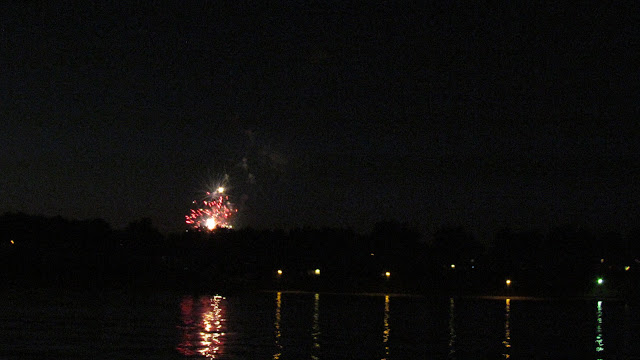 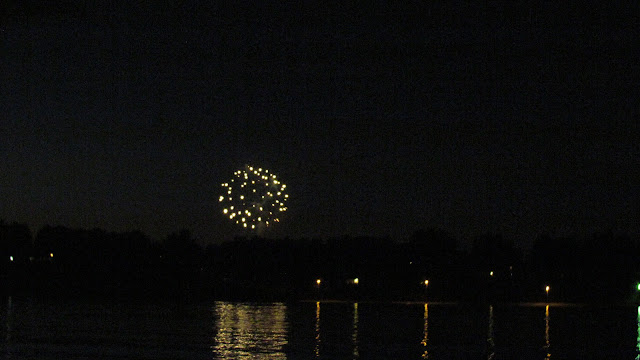 It may not be the biggest, loudest, or most sophisticated fireworks display in North America, but it sure beat the SNAFU'd show in San Diego  a couple of days later.

And you couldn't beat the seats.  Everything is better on a boat.
Posted by Dock Six Chronicles at 00:05