Before somebody gets all fired up and sends me more hate mail...

1. communication or exchange between individuals;

(As an aside, if this post title doesn't boost the Chronicles readership, nothing will.)


Right then, where were we?

Confession time:  I didn't set foot on any of the 6 figure monohull sailboats  at the show this year.  SWMBO and I did, however, clamber all over and through the Gemini 105MC catamaran on display with tape measure in hand. 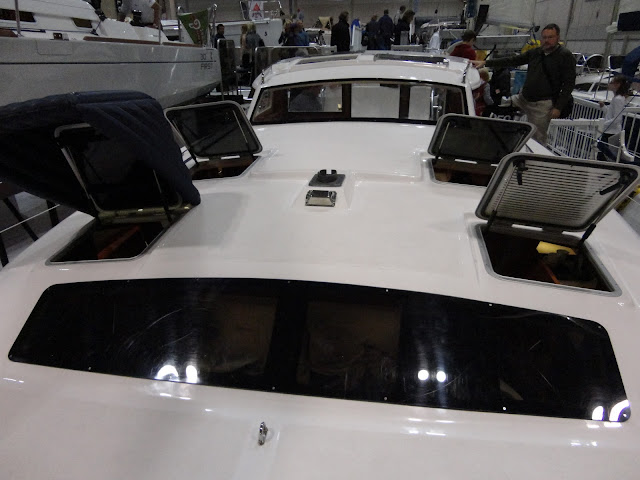 Before whipping it out, (the tape measure, perverts), I mentioned to the SOS (Salesguy on Site) that we were building a cat.   Not only did he allow us the run of the boat, he invited us to stop by the dealership in Mississauga if we need more info in the future. Thanks, North Lakes Yachting!

I was disappointed with the fit and finish of some of the Geminis I had seen in the past. Poorly mitred joinery and rough edges took some of the shine off an otherwise appealing package.   This might have been due to some  changes the marque had seen  over the past couple of years, with production being moved from TPI's own facilities to Hunter Boats.  The boat on display this year, however, seemed much more dialed in.  Gone are the gapping trim corners and misaligned doors of the past.  The new "doghouse" design has really lightened up the bridgedeck, as well as looking less "bolt-on" than earlier hulls. 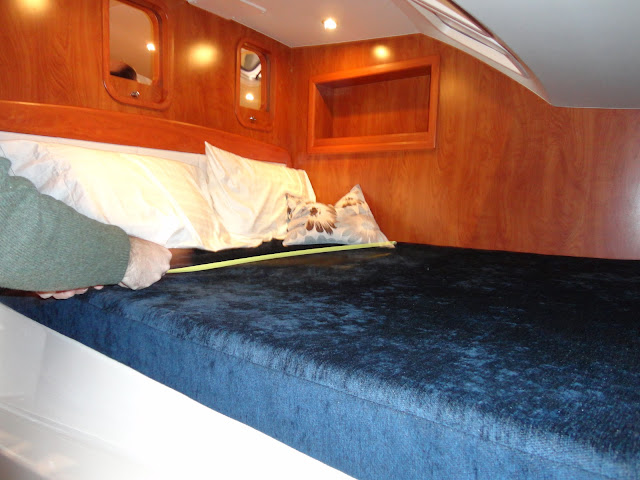 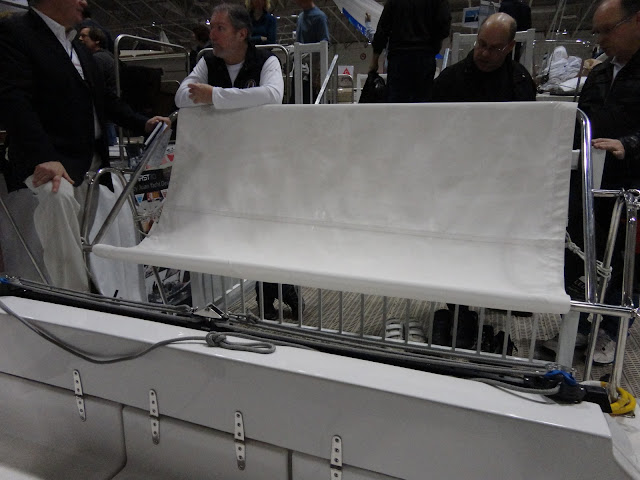 I'm still not sure I'm digging the sling couch hung out past the transom, with the traveller just below testicle level.  SWMBO says our cat needs one, though.

I'm sleeping with one eye open now.  So is the cat.

Luckily for you big-money big monohull fans,  I wasn't the only scribe at the show.  On Opening weekend, Chip and Jen from Fortuitous  made the trek north from the wilds of southern New Jersey to the wilds of   (formerly balmy) southern Ontario.  On Wednesday, I am cutting up boat parts in the driveway in my shirtsleeves.  Friday, the Fortuitous crew dragged a snowstorm and dropping temperatures across the border.   SWMBO and I were pleased to host Jen and Chip at stately Jones manor before they trekked further.  Their account of their adventure can be found here, Chip and Jen's Boat Show Adventure , along with some other great writing.
That was our first boat show-related  meet-and-greet.  On Saturday evening we convened a sailing site summit at the Westin's Chart Room  lounge. It was an eclectic group that somehow clicked.  In attendance were smallish boat racers,  Georgian Bay weekenders, circumnavigating liveaboards, a steel cruiser outfitter,  assorted OPB (Other People's Boats) sailors, and SWMBO and I.  Drinks were poured, stories were told, more drinks were poured, the tales got taller  (10 knots, I freakin' swear!)  I got louder, Poda ordered a sammich and somehow we ended up with a collection of the world's coolest ketchup bottles.

Yes, that is a shot glass. 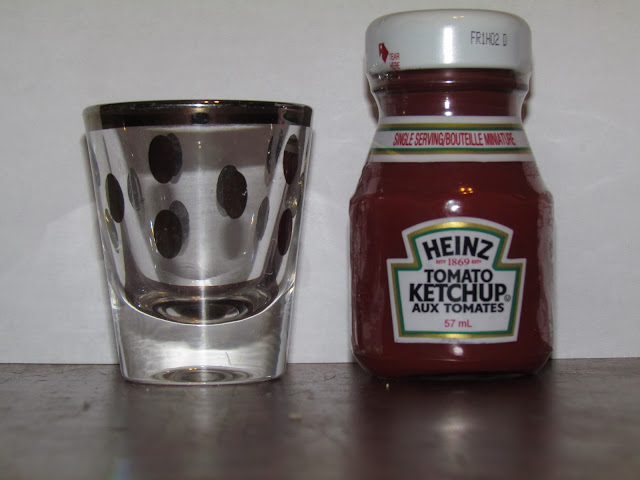 Oh, speaking of cool food, I'm gonna backtrack a little bit.  AFTER the show, but BEFORE the After-Show Get-together, SWMBO and I made tracks to our favourite guilty pleasure in Toronto: 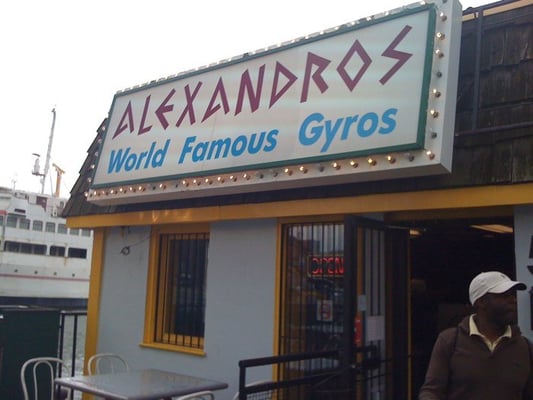 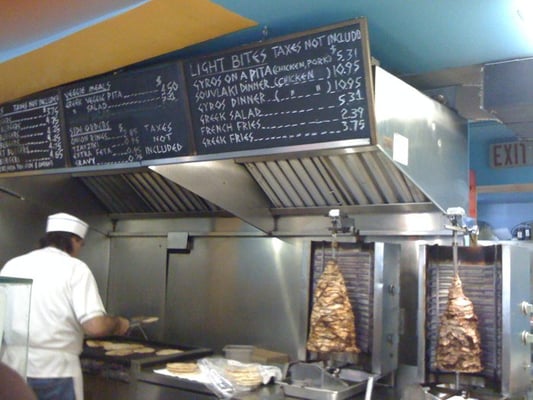 Don't forget to ask for extra tzatziki for the fries.

So, properly fortified and lubricated, in no particular order, we have: 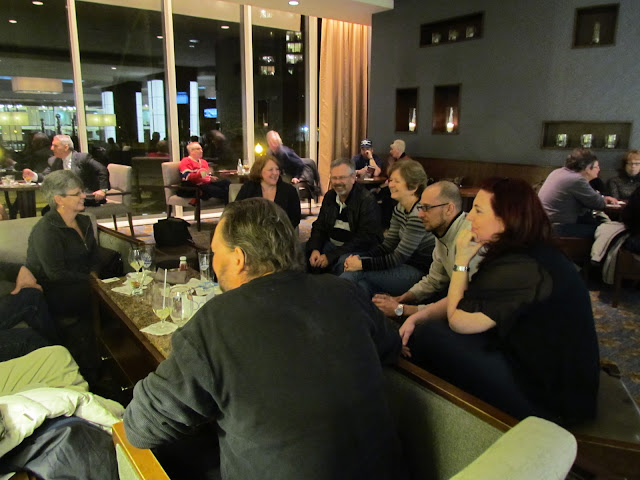 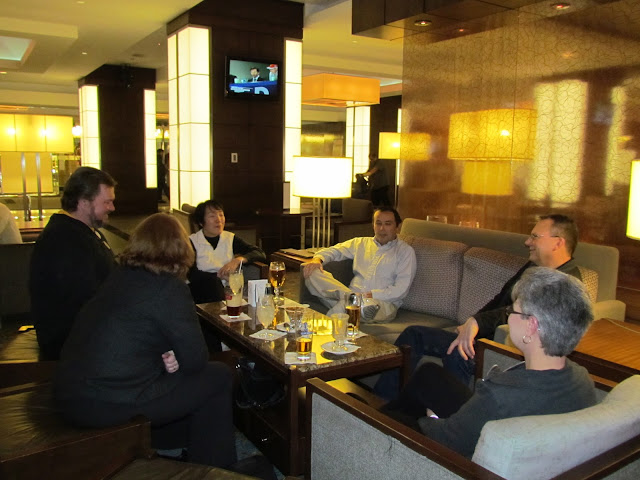 ( I could have sworn these pictures were in focus when I took them.)

Most of us had never met, backgrounds and experience varied widely, and none of us had ever spent any serious time together face to face.  Our only connection was advice and opinions traded on internet sailing forums.  Yet we were soon all chatting and laughing like we had known each other for years.  New friends were made, boat invitations extended and glasses raised.


A good time was had by all, and I don't think anyone has any new scars or  tattoos.

Towards the end of the night the crew from Tempus Fugit wandered past. Salutations were exchanged, drinks were offered...
and we were turned down!   Dissed to spend time with Turkey Point boaters.

Posted by Dock Six Chronicles at 21:10