New Crew and Visitors, Too!

It's been raining down here on the Dock.

Yeah, those worries about water levels I voiced a few weeks back?

Thanks to all of you who prayed to whatever deity floats your boat.

In between cloudbursts, we managed to get some time on the water and drink some rum with some new, crew, old friends, and new friends I've known for years.

I joined the SailNet community back in the fall of 2008, as a way of getting a sailing fix throughout the winter, and to  learn from the experience of others.  Interest-specific internet forums and chatrooms have been invaluable in every aspect of my life, from occupational advice to repairing my latest home improvement attempt.  I have learned a lot from crawling the web, and made some great friends as well.

Back in 2008, I was one of the few Canadian members of SailNet, one of even fewer who lived in Ontario, and when it came to representing Lake Erie?

Then I see a new username asking some good questions about a boat he had just bought and was fixing up to sail the next season.  He mentioned that he planned to sail on Pittock Lake, and my curiosity was piqued- Pittock Lake was where I learned to sail back in the 70s.

And it's also less than an hour from here.

In the years following, Eric and I would fire messages back and forth, trading advice and ideas on small boat repair, maintenance and sailing.

But, even being less than an hour apart, we never sailed together.

A couple of seasons back, Eric got a slip down here on the Dock for After School.  Now I could put a voice and a face to the name. We say hello and wave to each other in passing...

But we never sail together.

Last month, I'm walking down the Dock to Whiskeyjack, and Eric hails me as I pass his boat. He asks if I was heading out, and enquired whether I wanted company.

One of the blogs I follow is Jaye Lunsford's Life Afloat ,  an excellent peek at the day-to-day of living aboard a smallish ( a 33' CSY ) sailboat.  Jaye and her husband Dan have lived aboard for more than a decade, ever since they both retired from government employment.  Jaye and I are both SailNet members, and we began corresponding semi-regularly when I started scribbling the D6C,  as I often picked her  helpful brain for advice. I got an email from Jaye in early June, informing me that they were going to be passing by on their return form a vacation in Michigan, and asked whether they could stop in.

Oh yeah, and they would have rum.

The weather was dismal, but we had a wonderful time, meeting, eating, tasting rum, talking and laughing.

Last month, on one of the rare  sunny hot days, I see a guy walking down the Dock, with a double-double in his hand.  He asks me about Whiskeyjack, and we get to talking:

John has recently moved to Port Dover from Hamilton and is currently off work due to a bout of throat cancer.  As is often the case, a tap on the shoulder by the Big C will cause on to re-evaluate one's priorities, and  John had found himself spending a lot of time down here at the marina, just walking the docks, sipping coffee, watching the sunset or the sun rise.

A lifelong interest in boats had gone from interest to passion, and "buying a sailboat" just shot to the top of John's bucketlist.

Now, this is a fairly common occurence that usually takes one of two paths:

Or, after some thinking and ruminating and examination, the boat ownership dream is quietly shelved.

Over the following couple of weeks we'd talk about boats once or twice a week, and then John announces he has a slip.

He got the last available slip on the Dock this season.

Okay, John's not playing around!

Now he just needs a boat to fill it.

The slip was filled this morning. 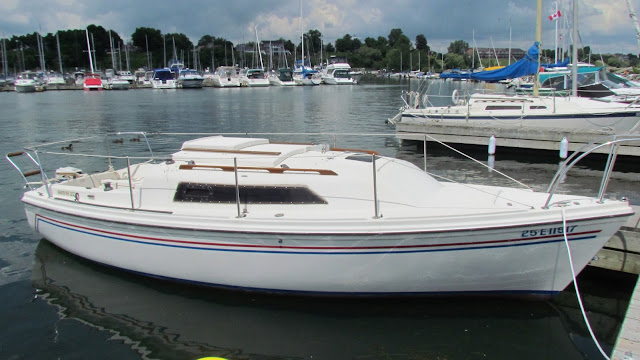 He's got some rigging yet to do, but he's hullwet, and that's a great start.  Good on ya, John!


In Other Dock  news, Oriel C has new owners.


Glen and Debbie decided it was time to ditch life on land in Alberta and go sailing.

So, they bought a boat.

Then they retired,  sold everything that needed selling, packed the camper and headed east.  They had sailed on Oriel, liked her and knew she would be a good fit for their next life-chapter. 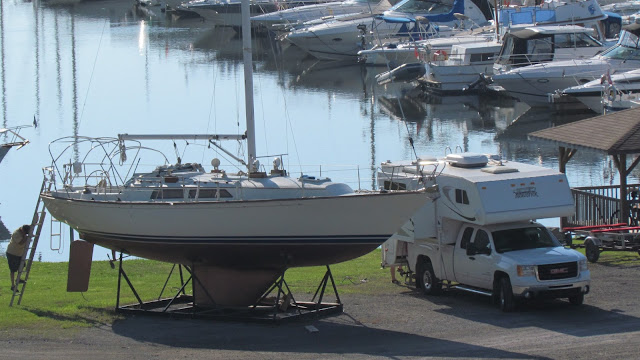 Glen and Debbie got here Tuesday, and two hot sweaty days of work later, got her splashed and settled in on Dock 1A.  After a couple weeks here, they plan to head into Lake Ontario and points East and South for the next year or so.

New folks new to boats, new folks on new boats, and friends new and old.  We've met some good folks down here on the Dock with great stories to tell.

You should come down and join us some time.

Posted by Dock Six Chronicles at 15:11