Uneasy Times On The Bay


* Sorry about the gap in D6C installments- instead of simply typing outta my ass like usual, this post actually took real research and stuff.

Even if you aren't a boater, it fuels your life.  You drink it, bathe in it, cook with it, wash your dishes, your car and your dog with it, and some heathens use it to ruin perfectly good whiskey

With less water, life is possible, but less fun.

Welcome to the 2013 Long Point Bay Boating Season, where and when we become acutely aware of the effects of events miles away and generations ago.

I wanted to know what we are facing and why, so I did some research and learned some stuff.  I figured I'd pass along what I have learned.

This year the Bay is caught in a perfect storm:  lower than usual water levels and high silt accumulation reducing water depth thanks to low precipitation, higher temperatures...and politics.


Those of you following along at home know that water levels are a cause for concern down here on the Dock.  Boats need water to float, and sailboats, with their  keels sticking down to offset the force on the spars sticking up, need more water than most.

Here was how the Dock looked in the Spring of 2011: 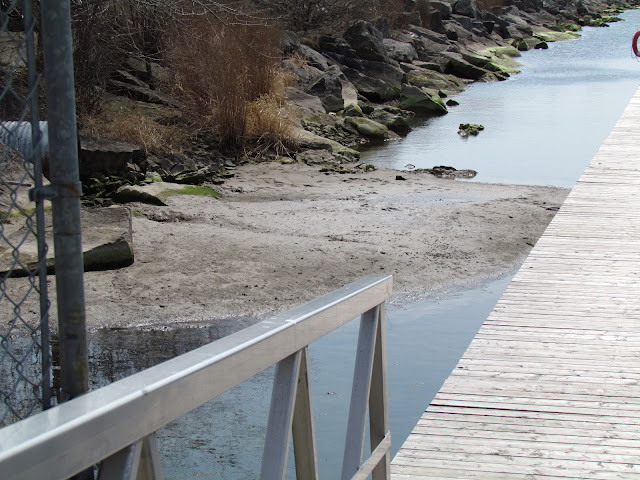 Pretty much the same depth as the Fall of 2010- a relatively wet summer throughout the Great Lakes, and especially the Upper Lakes (Michigan, Huron, Superior)  helped bring up water levels throughout the season.

The winter of  2011-2012 was dry - damn little precipitation, high temps virtually no ice on the lake,  yet  when the Dock opened in April, water levels were UP. 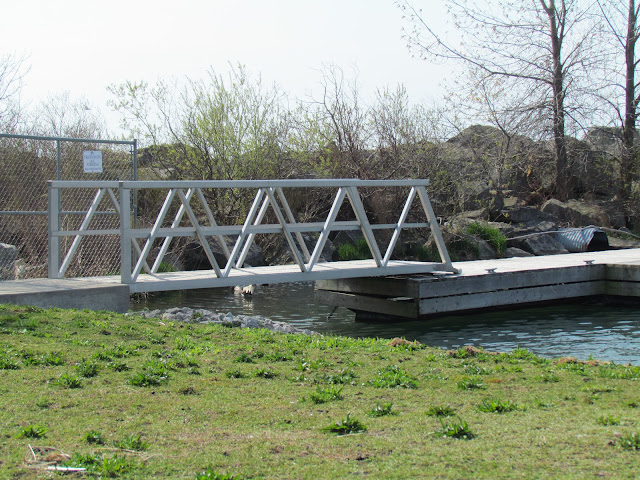 I didn't understand the significance at the time.

This was the result: 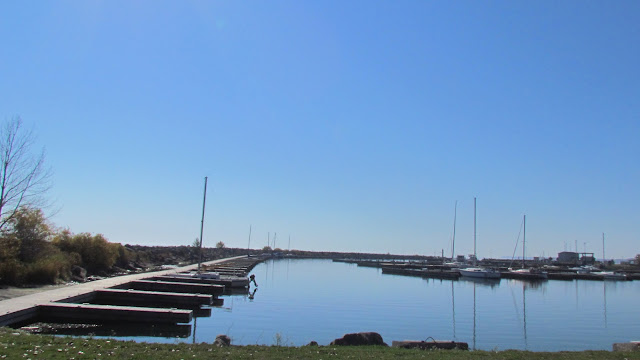 By mid-September the foot of the dock was high and dry thanks to a lack of precipitation throughout the entire Great Lakes region.  The first seven slips couldn't float a boat, and Will's Tanzer is nudged into the sand in the eighth slip out.

I had never seen the water this low.


So, where do we stand now?

This winter was colder and wetter than last, locally, with more rain this spring, and here's how the Dock looked on Opening Day (April 15, 2013):

Okay, so what is going on?

Lake Erie is, essentially, a really, really big pond.  Erie is the shallowest of the Great Lakes, the farthest south, and has the smallest volume of water.... all of which has an impact on water level fluctuations.  The average depth is only 62 feet, and the deepest part of  the Lake is 210 feet, give or take.

Long Point Bay is a little like a Mini-Me version of the Lake- maximum depth is  over 100 feet, but the vast majority of the Bay is closer to 20 feet.

But, when inflow is reduced, it becomes crucial for the Lake to hold onto what she's given.  This is where that "Southernmost" part kicks in.  Erie doesn't get as cold as the other lakes, and as such usually freezes later, thaws sooner, and doesn't freeze as thick...
When it freezes.
The recent warmer winters have added insult to low-water injury.  The Lake hasn't frozen solid over the last few winters.

So, no ice cap in the winter because of warmer temperatures means more water lost due to winter evaporation.

Any evaporation is not a good thing in an already shallow Lake, and a shallower Bay. Increase the duration of the evaporation period by 50%?  Yeah,   not good.


So, back to the geography:  Long  Point Bay is shallow.  Get into the Inner Bay, and it is much, much, shallower:

That's a lot of zeros on that chart.

That's good for fishing and hunting and birding and hiking and kayaking and such because lots of fish and birds and turtles and other animals and trees and plants and such really like that shallow water, and that diversity is one of the reasons why Long Point is a World Biosphere Reserve.

Much of the Inner Bay, at the best of times, is the depth of a suburban backyard swimming pool.

(And not one of the nice ones, like you wish you had, growing up.    An above-ground pool.  A cheap one.  All shallow end.)

These aren't the best of times, depth-wise.

There's 150 years of average annual water level above sea level.  The red line is the average of the averages.
Here's the current Data

And here's how April 2013 stacks up against the historical record, according to the Canadian Hydrographic Service

In other words, if the water levels were Faber College grades, Dean Wormer would put  Lake Erie on double secret probation.

Avid Reader, if your eyes haven't glazed over yet, and if you a contrarian skeptic, you are now pointing to the top graph and saying "It ain't as low as 1936! Or even 1962! Kwitcherbitchen!"


The St. Clair River is the tie that binds the Upper Lakes (Michigan, Superior and Huron) to the Lower Lakes (Erie and Ontario.)  and sometimes that tie can be constricting.    The 60s were a booming time for manufacturing and agriculture in North America-  larger, deeper draft ships were needed to keep feeding the supply to the demand.

Except they couldn't fit through the bottleneck of the St. Clair River.

Yes, Constant Skeptic Smartypants Reader, I see you smirking.  Go ahead, say it.

"Dredging is obviously GOOD NEWS for the Lower Lakes!   A deeper river means more water volume, and more water volume means less lake level fluctuation and the lake is consistently deeper, as borne out by the GLERL graph up there."

Until the Upper Lakes suffer a drought...

Less water up there means less water down here..
And they have  a hell of a lot less water.

The repeated dredging to keep the deep draft channel open, along  with sand and gravel mining has led to  "unexpected erosion"  according to a study commissioned in 2005. leading to:

"...the [IJC estimating the ]drop in level difference between MH and E [Michigan, Huron and Erie- ed.] since
1860 is 36 to 46 cm (14 to 18 in.), compared to the actual observed drop of
approximately 80 cm (2.6 ft). Without implementation of compensation measures, this
drop represents an irreversible decline in the long-term average lake level of MH..."

(More here for anybody suffering from insomnia:
http://pub.iugls.org/en/Other_Publications/Baird_Report.pdf  )


Take a look up there again at that Inner Bay chart- see all the depth marking starting with the number 0?  yep, less than a metre of depth at chart datum.  According to Real Time Water Level Gauging at Port Dover
the Bay is currently hovering about .6 metre above  datum.
Two feet.

If the lake level drops to the level last seen in 1936, the Inner Bay is going to be nothing but a bigass puddle full of unhappy birds and fish and turtles and grasses and such.

If that is where the water level is in the spring, by fall it's likely gonna be swampy.  Three seasons ago, every slip in the picture above was occupied.  In my conversations with canal-fronting homeowners this spring,  it sounds like most of those slips will likely remain vacant all season.


"So,"  Impatient Reader sighs, " A lack of precipitation up there in the Upper Lakes coupled with warmer, dryer weather down here is having an impact on water levels and the St. Clair River dredging didn't help, but, the water is still above datum on the charts,  so what is the big deal?"

This is where that "perfect storm" part I was talking about earlier comes in:

It's not just that the water level is dropping...  the bottom is also coming UP.


Let's go back to the low water days of 1936 for a second.  Here's one big local difference between then and now:
Silver Lake.
Essentially a millpond on steroids, Silver Lake was originally a power source for a woolen mill, and later a water source for the Ivey's greenhouse operation.

You can see Ivey's greenhouses and the powerhouse chimney in the background.

It's dying.  The water level has dropped dramatically over the last few years.

and on the verge of collapse.

With the dam's stability in question, Norfolk County made the decision to drain Silver Lake, which, as so often happens, has caused some unintended consequences.
Consequence #1:  In addition to it's intended roles in wool milling and plant growing, Silver Lake also served another purpose- it acted as a settling pond for sediment flowing down the Lynn River.  With the dam out of commission, the Lynn River has been flowing unimpeded, and the River downstream of the dam has started silting up.  Lower water levels and a rising bottom are forcing some unpleasant decisions.
Dockage at the Port Dover Yacht Club  looks to be problematic... at least for now.

From the newsletter:  "...Low water continues to plague us especially this year. We’re not sure what that means especially sail boats but power boats on the back channel could also be affected as well. Unfortunately we are beyond the point in time where dredging can occur..."

Consequence #2:   Apparently repairing a broken dam is no simple thing when two levels of government and bureaucracy are involved.  As it stands now, Ontario's  Ministry of Natural Resources  is demanding that any new dam being built must be constructed to withstand a "thousand year" flood, which means raising the surrounding land over 2 metres, with an attached price tag estimated to be north of ten millon dollars.

(My suggestion, just fix it and fight the fines when the MNR comes calling, was roundly rejected.)

Consequence #3:  Turns out not everybody wants the damn dam fixed.  Port Dover seems to be split between those who wish to save Silver Lake  and those who feel that repairing the dam is a blow to conservation, and this is an opportunity to return a manmade millpond back to it's natural state.

Arguments are valid on both sides-  I wonder whether the value of a "naturalized" mill pond will be fully realized considering how developed the remainder of the Port Dover waterfront has become, or whether it will do more harm than good.


Back at the turn of the century, this is what the harbour in Port Dover looked like:

Minimal breakwalling,  lots of open banks, the Lynn River could flow out and the Lake could flow in as necessary during storms, largely unimpeded.


Silt and shifitng sand that was no big deal a decade ago is now an expensive problem.  A shallow harbour is a useless harbour, making dredging not just a matter of convenience, but an economic necessity.

Sometimes dredging doesn't work out so well either.

The Marina is being dredged, for the second time in five years.

Where the markers are.

...Marking where the backhoe sank.


Coming into the marina yesterday (yes, Whiskeyjack is finally in the water- more on that later) Rod Keegan and I marvelled at the depth at the mouth of the marina- or lack thereof.  Whiskeyjack's depth sounder measured a low of 6.4'.

We need some rain.

Thanks to Jaye Lunsford , retired environmental scientist and liveaboard blogger extraordinaire, for her assistance in researching this post.  Any and all errors are the author's alone.

Posted by Dock Six Chronicles at 11:48