"Everybody's going there, and I'm going, too."
-Billy Murray

Friday morning I climb into the cockpit after swallowing my two-aspirin breakfast and spy a curious sight: 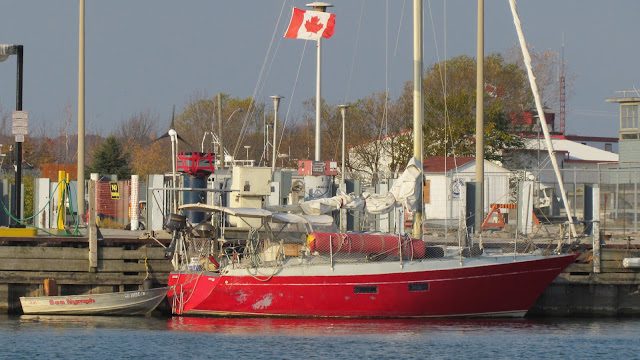 Not the tin fishing boat trailing behind the sailboat, or the Oscar Meyer weiner of a fender, or..

Okay, there was a whole mess of curious sights to spy, but what caught my attention was a)  the boat wasn't there when I  fell into bed after midnight and b)  the fuel dock closed for the season almost two weeks ago.   Hmm, looks like you ain't from around here, is ya?

Curious about the curious sight, I snagged Hilary and we wandered over and hailed the boat.   An obviously wrung-out  head poked out of the companionway.
"Are you Wally?"  I asked.
"Yeah, how'd you know?"
"I recognized your boat from pictures on your blog.  Want a coffee?"
A cup of Timmy's later we got acquainted. 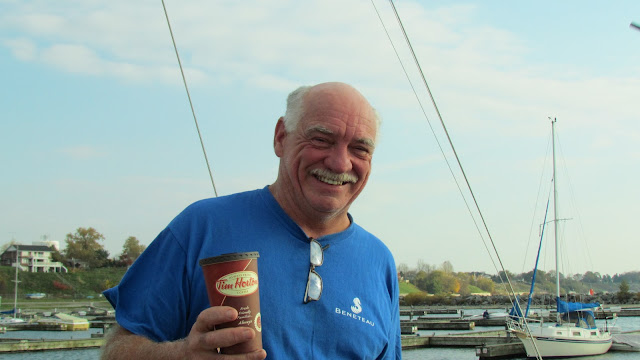 I briefly met Wally Moran at the Toronto Boat Show last winter, but neither of us had time for anything more than a grip-and-grin. I have been following his blog , his posts on Sailnet and his writing in Sail magazine for a couple of years, and enjoyed the opportunity to chat.  He's been there and done that, usually more than once, from the North Channel to Cuba.  Heading South again after summering on Georgian Bay, Wally and his crazy Cuban canine companion Aduana (seen below snarfing down a biscuit  she snatched from Hilary's truck) pulled into Port Dover at 4:30 am to have the mast pulled on his 34 footer, Gypsy Wind, after a frustrating, mainsail shredding slog along the coast of Lake Erie from Windsor. 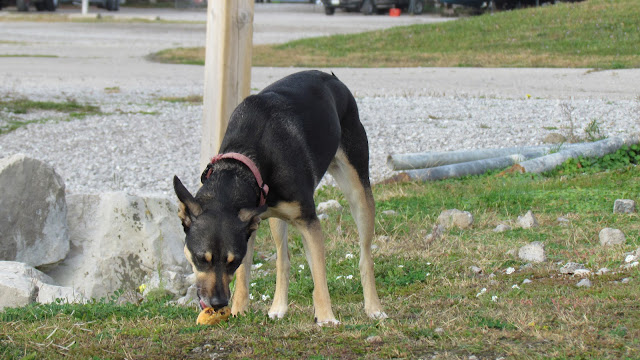 Since Hilary and I were taking our boats in the same direction, and Wally had never been to Port Dover before, we decided to convoy out and hit the hourly lift bridge opening together, get tied up at the Bridge Yachts yard,  get Wally set up with some scrap lumber to build the cribbing to carry his mast on deck, then find some badly need breakfast, er, brunch,  at the Dover Dairy Bar.

Wally has more than 30 000 nautical cruising miles under his feet, and 30 000 breakfasts worth of stories to tell.  We all had a good time, talking about the weather, the state of Canadian politics, Cuba, the ICW, and just generally shooting the shit while Aduana slumbered under the table.  As soon as the weather clears, Wally is off, heading to Buffalo, the Erie Canal and warmer points farther south.  Fair winds,Wally-catch you next spring on the return leg.

Posted by Dock Six Chronicles at 22:23