Hilary Gets It Up!

"Who is the man that would risk his neck for his brother man?"
-Isaac Hayes

Last week, Hilary and I discussed what he needed to do to get his boat in the water.  He mentioned that he needed to get the mast up, and didn't know whether he would hire a truck to take his trailer-burdened boat to the mast crane up the river, or whether he was going to motor over with the mast on the deck...

Hilary's boat is scheduled to go in the water on Thursday, so on Wednesday morning I meet Hilary and two other suckers helpers and we set to work.

As in so many of the posts here on the D6C (acronym courtesy of follower PorFin), this is NOT a "how-to" article.  This may better be described as a cautionary tale, a comedy of errors saved only by an overwhelmingly large barrel of luck which did not run dry before the accompanying cup of experience was filled.
In other words, don't do this.  if you do, don't blame me.

The mast and rig is resting atop the boat, still wrapped for transit, and because the mast is taller than the deck of the boat is long,  overhanging both  the bow and stern .  First we had to get all of the lines and stays laid out in apporximately the right position, get the forestay connected to the bow and the shrouds pinned to the chainplates.

Then came the first delicate part.

We have to move the mast forward.

More than half the boat forward, far enough forward to be able to step the foot of the mast on the mast step.

Four of us working on this project, and not one of us is a physicist, but we all understand gravity.  A quick confab is held, and a ladder is deployed, secured by some whimsical hopeful clever rigging 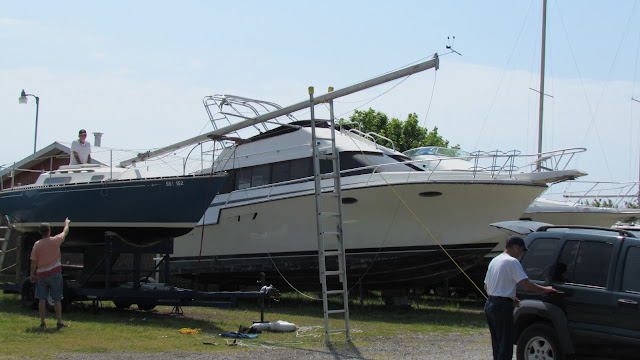 Note the large, expensive, unsuspecting cruiser beside Hilary's boat in this scene.   I am concerned that if the wheels come off and we get in the weeds with handfuls of wayward mast, we Hilary might have a costly problem. I ask Hilary if we can move the trailer forward to clear ground.

Nope.  The trailer is supported by jacks and it's also being used as a workbench so there is all sorts of crap that would have to be stowed.  Besides, he says, "There's no wind."

With mast largely on target, and temporarily supported,  it's time to work out how we're gonna get this big stick vertical. The decision is made to hang a block from the backstay tang on the transom, then secure a line to the backstay turnbuckle, lead the line back through the block and forward to the cabin top winch.  One of us would winch, while one or two of us would walk the mast up, and the man on the ground would move and extend the ladder providing support as needed. We looped a line over the spreaders and back to the toerail to act as temp stays.  The plan was winch, tension the temp stays, move the ladder, winch, tighten, stays, winch, while walking the mast up hand over hand from the bow. We'd take our time, communicate, co-ordinate our maneuvers, and all would proceed with well-oiled precision.

Then the wind fitfully starts to fart in gusts..

With the mast resting on the mast step, it was time.  The decision was made to count it down to get us all syncronized.
"On three!"

The guy on the winch starts cranking like he is grinding through a tack on an America's Cup boat.

The rest of us scramble to keep up as the mast starts it's climb to upright early.  Men, we really need to standardize the "Go on Three! or Three! and then Go!?!" protocol.

And the wind is becoming a little more insistent, like it knows what we're attempting.

40 seconds later the mast is up and a mad scramble is on to get the line off the backstay and the backstay secured and the inner shrouds pinned and the turnbuckles turned so that nothing buckles.  And I am the guy holding up the swaying mast.

In hindsight, the work would have been less stressful if all the hardware hadn't been sitting in one box as far away from the stuff requiring fastening as possible whilst still remaining aboard.

But we got it done, nobody got hurt... 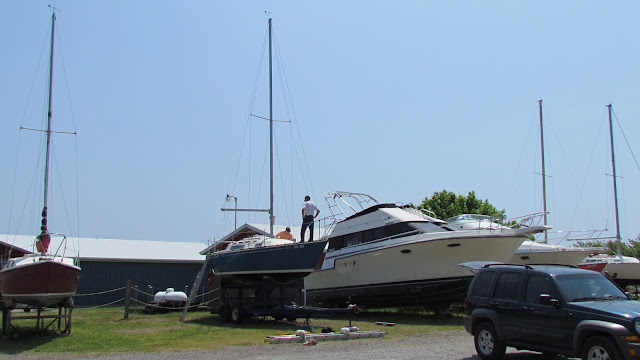 and Hilary and his yet-to-be-named boat is now on the water in his new slip, just down from Whiskeyjack. 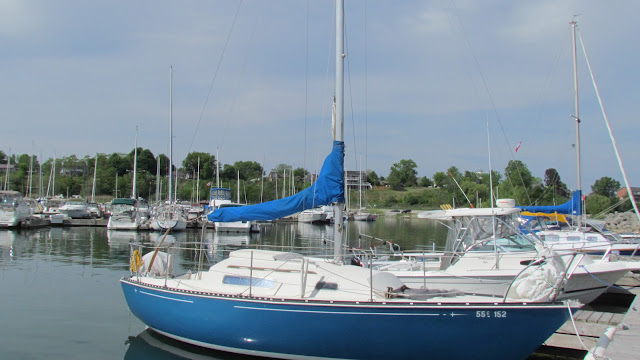 Thanks for taking the time to check us out.  Please feel free to "Talk the Dock!"  Link us, follow us, or just tell your friends.
Posted by Dock Six Chronicles at 15:18

Email ThisBlogThis!Share to TwitterShare to FacebookShare to Pinterest
Labels: boat work, hilary, how not to