When we last left DonorBoat, she was no longer a boat, but an untidy pile of fiberglass and punky plywood scraps in the driveway...

Which was a problem.

The keel hadn't moved geographically during the dismantling process.  It was pretty much where it lay, which is pretty much  horizontally in the middle of the driveway under the point where it had been attached vertically to a boat which no longer existed. 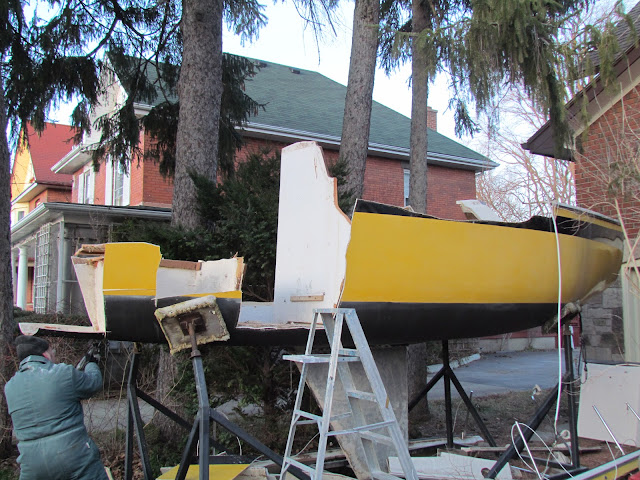 Keel, prior to getting horizontal

However, that change of altitude and attitude presented a problem.  To whit, how to get a half ton or so of lead from the crushed red tile driveway of Stately Jones Manor into the back of a truck or trailer to be conveyed to a more attractive location, ie. one that will give me cash money in exchange for the aforementioned lump of lead.

I decided to deal with this dilemma in a time-tested fashion.

For a couple of months it lay in the middle of the driveway, while I scratched my head and pondered and plotted and planned and generally avoided dealing with it.

Finally, I could avoid the issue no longer.  SWMBO made it clear that it had to go.

I had planned to borrow my father's truck for this transport mission, but, with no solid plan for levitating the lead into the bed, I wasn't entirely, 100%, absotively sure that I would not scratch the paint or dent the bed.  In fact, I was about 42% sure that damage would indeed be done.  Not good. My dad loves his truck.  Possibly more than me.  DEFINITELY more than me if I damage his truck hauling dead boat scrap. My already shaky position in the inheritance sweepstakes would be seriously un-strengthened.


A few years ago I bought a trailer.  A scruffy flatbed of uncertain provenance, dubious pedigree and questionable mechanics, this purchase had only one positive quality.

As I hauled the squealing, bouncing, wandering mongrel home, I wondered if I might have overpaid, by about $90.

The original purpose behind the purchase was to haul away the remains of a demolished shed from the grounds of Stately Jones Manor.  I got the job half done.

I loaded the shed detritus on the trailer.

Three years later, it was still in the backyard, still loaded.

So, I off-loaded the trash from the loaded trailer (to the unspoken handwringing horror of onlooking neighbours, who were quietly hopeful that the flurry of activity signalled a commitment to improved groundskeeping...  until they saw junk coming OFF the trailer, and back to the position it occupied in 2009.)
dragged it around to the driveway, and pondered how to get the keel from HERE (crushed red tile resting place) to THERE ( bed of trailer). 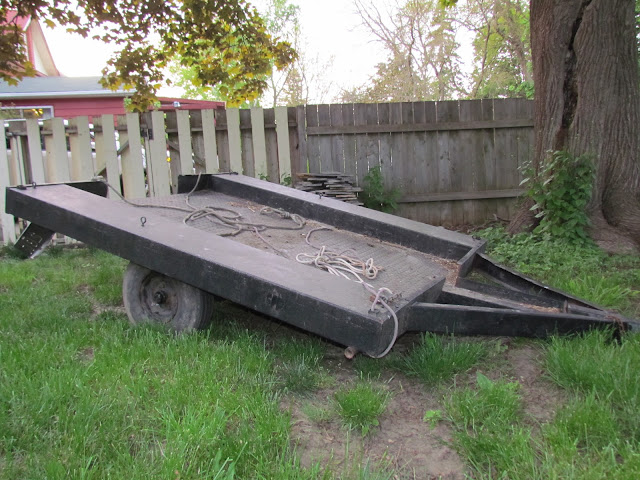 While pondering the physics, I also considered the physical.  The trailer's condition is, er, critical.  The tires are cracked, the dust caps are missing from the wheels, there are no lights, and the hitch doesn't do what it's name suggests.  I also have no idea of the trailer's payload rating.  I figure that the odds are even that the tires will give out, the springs will fail and the frame will collapse under the load.

SWMBO and I dug into the depths of the garage and dragged out the floor jack and jack stands and come-alongs and tow straps and blocks of wood and pry bars, and threw all of it at the keel...

and, after months of planning and pondering and perusing and plotting, we had the keel on the trailer without injury or damage...

Okay, so practicing typical Jones Ready, Fire, Aim Non-linear Problem Solving Doctrine, now I tackle fixing the now-loaded trailer to make it trail at least semi-reliably.  I filled the tires, greased the wheel bearings, rebuilt the hitch so that it did hitch semi-consistently with only mild blunt object persuasion, got a license plate for the mutt and then considered the next hurdle:

Here's the details on the keel in question, as sussed from the Interweb:


As I look at how close the bed of theloaded  trailer is to the tread of the elderly tires, I suspect that the trailer has a payload capacity nowhere near 1250 lbs.  In fact, the tires are rated at only 750 lbs.  Sure, there's two of them, giving a theoretical payload of 1500 lbs, providing the spring and axle rating is at least that of the tires, but factor in the age and neglect of the various components and there's definitely no guarantees here. The limted daylight showing between the top of the tires and the underside of the trailer bed doesn't give me much confidence that the trailer is MORE robust than suspected.

Let's hit the road and see what happens.

The original plan, months ago, was to haul the keel  75 km or so to Mars Keels in Burlington.  That plan was re-planned when it was clear that the trailer may not survive the trip.  So, a much shorter route was laid out, to JLM Recycling in Waterford.  The day before hauling out booty, I stopped in to see Jamie at JLM to negotiate the rate.  The rate per lb. was not as high as Mars, but, as Jamie pointed out, it's a cheaper trip.

Early the next morning, SWMBO and I sloooowwwwwllllly set off for Waterford, trailer in tow, SWMBO behind the wheel.  The trip, while slow, was largely uneventful.  We got to the scrapyard, crossed the scale, and watched a front end loader lift the keel off the trailer bed like a feather.  Now empty, we crossed the scale again, then I climbed the stairs to the office to receive our bounty.
...  which was hundreds of dollars more than I expected. 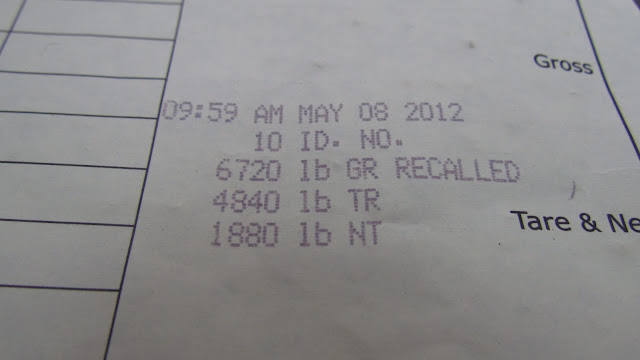 I have a new respect for our scruffy mongrel of a trailer.


Thanks for taking the time to check us out.  Please feel free to "Talk the Dock!" Link us, follow us or just tell your friends.
Posted by Dock Six Chronicles at 19:58