"Your dreams were your ticket out..."
-John Sebastian

He was on the scene when we had our big blow in April, and he brought wind with him when he returned in September to pick up Suntack's cradle.

Last time I saw Bill he was leaving the marina, headed for home.  I got a chance to crack a beer or two with him when he returned, and he gave me the trip report.

April is a tough month to transit the Great Lakes.  It's usually ex-wife weather-  cold, bitter and unpredictably nasty.  This year was no exception.  It was raining when Bill left, and it didn't stop raining until he was within sight of home...
Nine days later.
The only chart Bill had when he departed the marina was the Welland Canal chart I loaned him.  He figured he'd pick up a Lake Ontario chart along the way.
Apparently Lake Ontario chandleries don't stock charts this early in the season, because Bill couldn't find one for sale when he exited the canal.  As Bill tells it, he navigated by using the only navigational aid he could find:
A road map.

I shit you not.

This man may have a bigger cup of luck than most.

This was a quick touch-and-go run for Bill- drive down to the marina on Wednesday, pick up the cradle, drive back on Thursday.  Thursday morning however dawned with a fresh breeze and sun, and it didn't take much arm-twisting to convince Bill to go for a sail.  I was on the clock, but I figured I could play hooky for a couple of hours, and I had my phone with me, in case the office needed to get in touch with me.    By the time we got the main sail uncovered and the docklines untied, the weather was getting ... interesting. 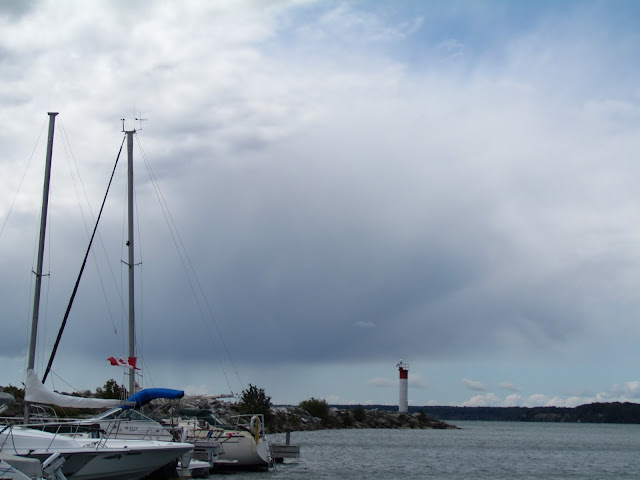 The wind was out of the Northeast, pushing the clouds away, but also creating some weird sea conditions on the lake.  There was little wave action but the wind was 20 knots with gusts to 30.  We cruised along the beach under power, grinning and reading the wind and just as we were about to raise the main...
... my phone rings.

Turn around and head back to the Dock, as the wind is freshening.  Bill's got the helm.  With each gust, Whiskeyjack laid over and hardened up at about 20 degrees.

With no sails.  Bare poles.
Just for giggles we shut down the Yanmar and kept an eye on the chart plotter.  We were still sailing along at 2 knots, just on the dodger and bimini! 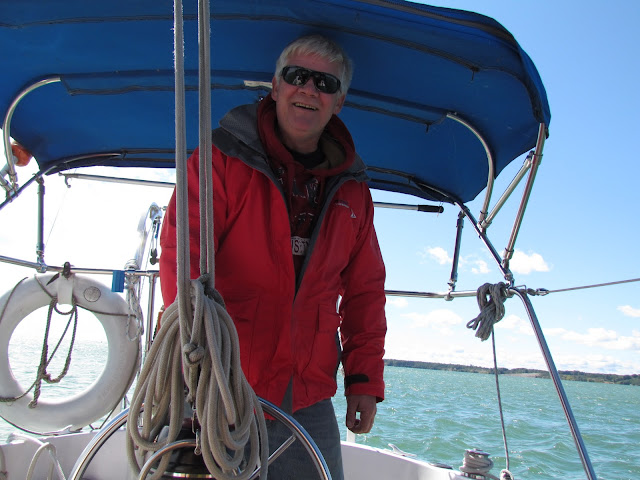 We didn't get any canvas up but we still came home with another story to tell.  Thanks for bringing the wind, Bill!

Next time, I leave my phone at home.


Thanks for taking the time to check us out.  Please feel free to "Talk the Dock."  Link us, follow us or just tell your friends.
Posted by Dock Six Chronicles at 20:18

Email ThisBlogThis!Share to TwitterShare to FacebookShare to Pinterest
Labels: bill