Arguably, the one unifying force in this country is not political, but gastronomic, a power that has repelled and conquered  foreign interlopers, an entity known and loved nationwide that has created a culture and added to the national lexicon, a benevolent behemoth so ubiquitous that everyone know's it best by it's nickname:

Tim Horton's Donuts is one of the great Canadian success stories,  with thousands of stores across the country and around the world, serving up the lion's share of take-out coffee and pastry in this country.   Krispy Kreme, Dunkin Donuts, Starbucks and dozens of regional chains and thousands of independent coffee and donut joints fight tooth and nail for the scraps left over.  According to Wikipedia, Tim Horton's commands a whopping 76% of the pastry sales in Canada, and 62% of the coffee sales.
Starbuck's is number 2... at 7%.

One of the secrets to Tim Horton's success is the chain's consistency- Uniforms, coffee blend, store design, menus and recipes are all proprietary and sourced from a small handful of suppliers.   You can expect an "everything" bagel or "chocolate dip" donut to taste the same in Victoria, BC and Sydney, NS.

Or  Afghanistan.  Tim's went to war alongside our troops, opening an outlet at the coalition base at Kandahar, staffed by Tim's employees, not contractors or military staff.  These folks don't play when it comes to maintaining quality and consistency.

But, there is some leeway, and Tim's has a history of listening to, and responding to, the wishes of the franchisees.

Which brings us to the Dock's local Timmy's in Port Dover.

It starts outside.  Traditionally, Tim Horton's stores are of the "Brown Brick Box" school of retail architecture.  When the Port Dover Timmy's moved to a new location a little more than a decade ago, the franchise owners decided to do something different: 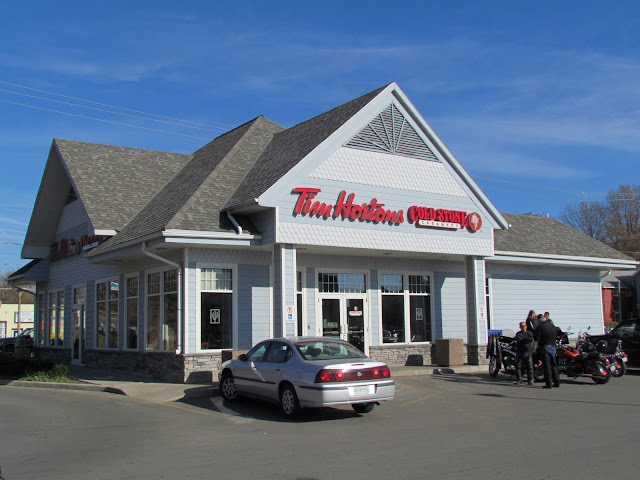 This is the prototype "Downeast" design Timmy's store, a design that has since been repeated in the maritime provinces, and throughout New England.  A nautical theme is carried throughout the interior decor, with rope edged counter tops and a pedestal complete with ship's wheel and compass binnacle in the center of the store. 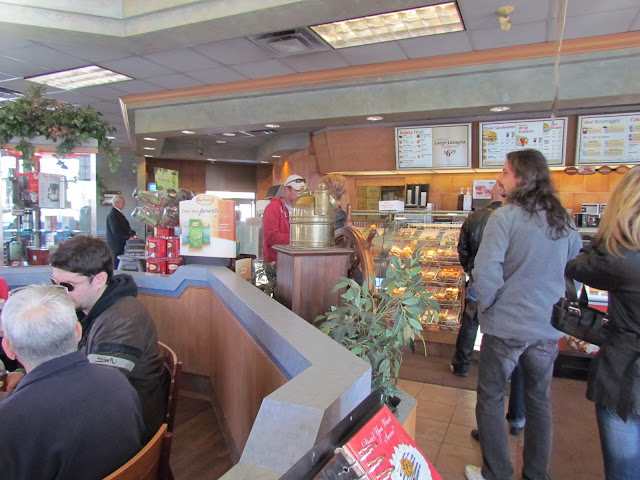 The menu  is a little different as well.  Here, you can get the world's best donut, if you know how to order:

(At this time,  drumroll would be appropriate.  Feel free to generate your own facsimile.) 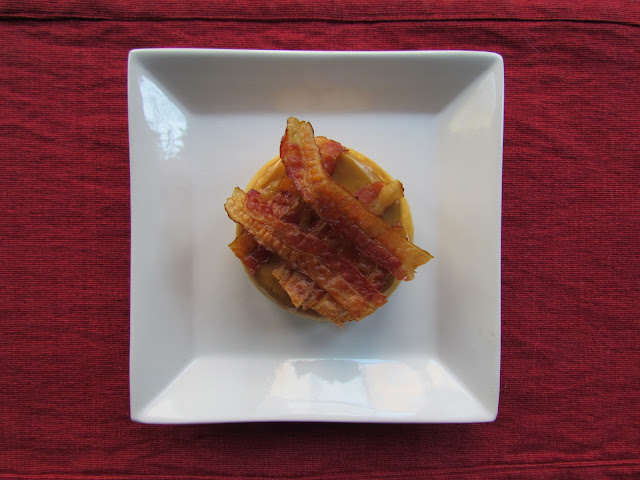 Unadorned,  a Tim's Maple Dip donut is damn near donut perfection.  A soft, airy, yeasty donut dressed with perfect maple frosting.  Donut frosting sounds simple, but so many donut joints and bakeries can't seem to get it right.  Timing is everything.  If the donut is too cool when frosted, the frosting is simply cold-welded to the donut chassis.  It looks fine, but one bite causes the frosting to flake, fragment and freefall to the floor.  Too warm and the frosting is a fizzled drizzle, dripping, drooling and generally doing it's damnedest to depart the donut.

On the frosting tip, Timmy's rolls straight up Goldilocks-style;  not too hot, not too cold, just right.

Add a handful of strips of bacon and the simple pleasure becomes sublime.  I gotta see it again: 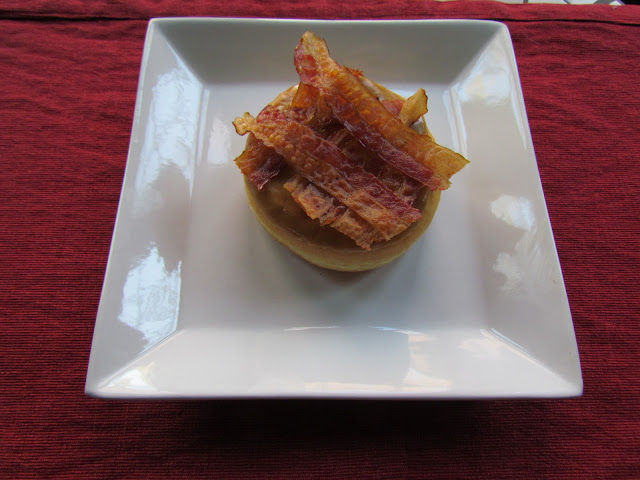 If there is any justice in the world, this would be a regular menu item.  Call it a "Dock Six."

( Hell, if a donut called a "Dutchie"  can catch on, then this is a no-brainer.)

Better yet, spread the word.  It's not like the world can't use another great donut.

Posted by Dock Six Chronicles at 16:42