I was reminded, once again, that I don't bounce back like I did when I was 25.

But  I bounce back better.


SWMBO is visiting her parents on Long Island, this week, so Inky and Finn and I are left to our own devices.
( I'm not offering her absence as an excuse for what happened on Saturday, but simply an explanation for why she wasn't in the middle of the shenanigans.)

It was a tough afternoon for docking,  so when I saw Wheelin' n Dealin'  approaching her slip on the third first attempt, I sauntered down to catch lines.  Wheelin'  is a newcomer to the Dock, so we did the Who-are-you-where-are-you-from-what-do-you-do human buttsniff.   Nice bunch, in their early 20s. Soon, James rolled up.  At this point, we decided to do some more rum research.  The crew of Wheelin' broke into a fresh flat of Bud Light.  In cans.
I repeat:
Bud Light. In cans.
I raced to Whiskeyjack to grab some Brava.  In bottles.  I smirked at their choice of over-priced watered down mass-market training beer, they smirked at my choice of full-bodied cheap beer.  Young buck-old fart cultural differences. We argued about beer, docking, sailing versus powerboating. As the shadows lengthened we ordered pizza.  Another disagreement on where to order from, but  Harbour Pizza* won out because a) they will deliver to the dock, and none of us were driving anywhere and b) I had the number on speed dial on my phone.
A good time was had by all. 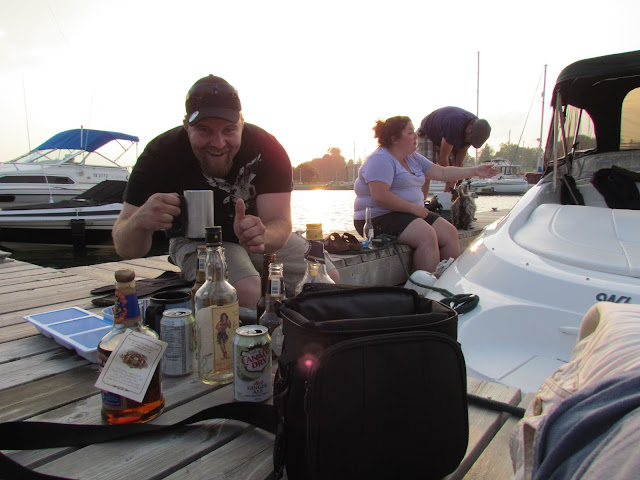 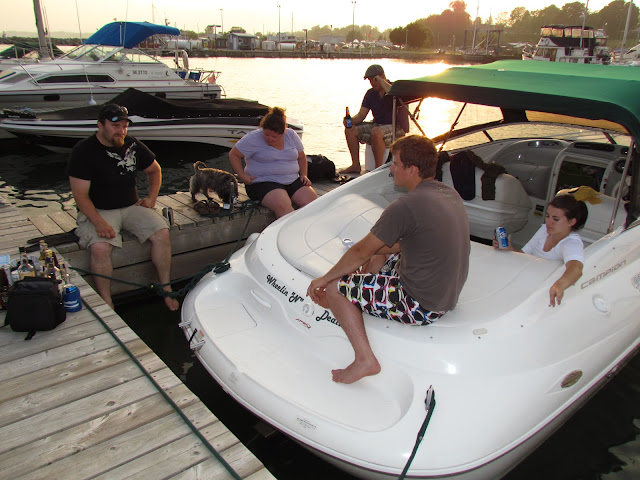 There are rumours of photos of your scribe lying prone on the dock, unable to function. I cannot confirm or deny.
There are some parts of the evening I don't remember.  I DO have to remember that I cannot drink like I am 25 anymore, and I shouldn't try to keep up with the 25 year olds...
Because I don't feel 25 the next morning.
I woke up with sweater-covered teeth, a brain that was threatening to break out of my skull, and mild embarrassment at being so immature.  After a quick glimpse in a mirror to make sure I don't have any new tattoos or piercings,  quick headcount to ensure that both dogs were present and a silent vow, again, to never do that again,  I climbed onto the dock and squinted into the sun.
That hurt.
Yep, I am not as young as I used to be... but I'm better.  I think.
After a wake-up cup of coffee to clear the cobwebs, however, I did pull together a survivor's breakfast of "hair of the dog" cinnamon-rum french toast with homemade cinnamon bread and peameal bacon.  Served six. With two burners, two square feet of counter space and a two cubic ft. icebox. 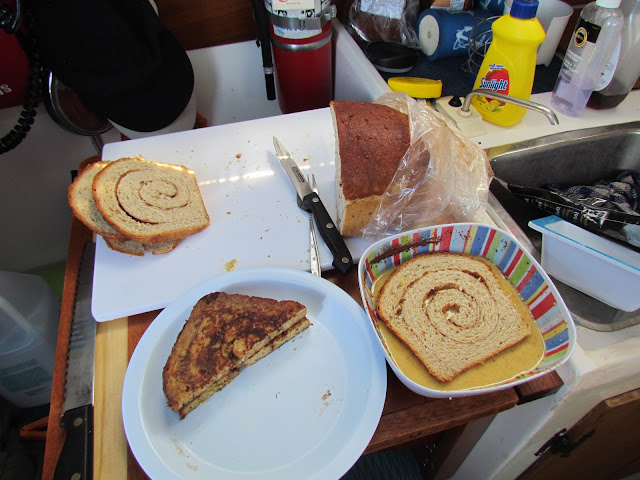 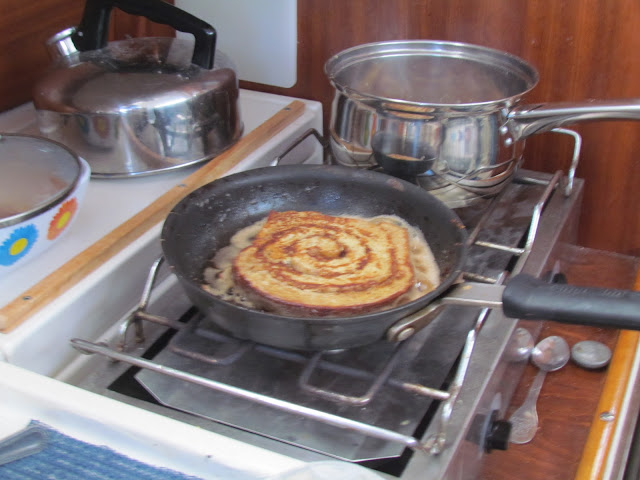 *As seen on the Good Grub List.  Best pizza in town.  I don't care what James thinks.

Thanks for taking the time to check us out.  As always, please feel free to "Talk the Dock!"  Follow us, link us, or just tell your friends.
Posted by Dock Six Chronicles at 20:14