There's a clapped-out old cliche about boats that goes something like, "a boat is a hole in the water you pour money into."  This well-worn line is usually trotted out by dirt-dwellers who have decided to pursue far more worthy  pursuits, like golf.  Or gardening.  Or riding a Harley.  Or all three.  And then they usually laugh, which looks really ridiculous when you are wearing a leather jacket and holding a Callaway driver in one hand and a garden trowel in the other looking like an odd re-boot of  the dude in Grant Wood's "American Gothic."  Okay, I might be exaggerating.
( But is there anything more cringe-worthy than seeing your now-retired third grade teacher perched behind her husband on a Road King, blinged out in chaps and a t-shirt which reads "If you can read the back of his shirt, I've fallen off!"?  I'm just gonna let that image hang there, while you go and get a fork to try to pry it out of your skull.  Go ahead.  I'll wait.)

I am one of those odd souls who genuinely enjoys boat maintenance.    I fix what's broken,  I improve what needs improving, I fix my improvements, then I improve my fixes.  Basically, I enjoy working on a boat as much as I enjoy sailing a boat, which is the first sign of a serious addiction. Soon it leads to building boats, and restoring boats which inevitably leads to collecting boats, and once you reach this stage Betty Ford won't even accept your family's calls because they know there is no hope of a cure.  Luckily, I have a wife who is either codependent or an enabler, or suffers an addiction of her own, depending upon who you ask.  We put in equal hours of sweat equity and equally reap the benefits.  I hope I make her half as proud as she makes me.
(Can you tell I might have screwed the pooch on the Valentine's Day bouquet front?)

I have been playing with boats off and on since I was nine years old, but was in remission for a dozen years or so  when my wife decided that we needed a sailboat.  That was in the spring of 2008, and in short order we became the proud stewards of "Whiskeyjack"  a Georgian 23 built by Vandestadt & McGruer in Owen Sound, Ontario.

Yeah, we'd never heard of a Georgian 23 either.

Vandestadt & McGruer was responsible for some of the most iconic  sailboat designs of the 60s and 70s.  The yard produced such successful designs as the the Siren 17 micro cruiser, the Sirius 21 and Sirius 28 cruisers, as well as designing boats for other builders, notably Grampian.  Surrounded by all this success, the Georgian 23  seemed to get lost in the shuffle.
It is a bit of an odd boat, either a little big boat, or a big little boat, depending upon your point of view.  A Georgian 23 packs a lot of features normally found on larger boats into a small package, which means that sacrifices had to be made in the process.   One of them is aesthetics.  The boat has 6'1" headroom in the cabin, which on a boat with a 20 foot waterline and a three foot draft means you have a boat that some feel is a little awkward looking dimensionally.  All Georgian 23s came with wheel steering on a moulded pedestal, which also provided a mounting point for the mainsheet, and most had outboard power.  An inline galley, small enclosed head  and berths for four or a VERY friendly five round out the package.  A Georgian 23 is a good small family cruiser, pokey, porky, but forgiving and comfortable.  Most were delivered with a very basic equipment list, and most of them stayed basic throughout their lives.  Whiskeyjack, however, was different.  That is how we ended up with her.

When we started boat shopping, Louise (henceforth known as SWMBO*)  and I put together a list of what we wanted, what we needed, and what we would like to have.  Wheel steering was a need, decent headroom was a need, (tall teenage son),  a private head was a need (typical teenage daughter),  furling jib was a want, a bimini and a dodger was a want, an inboard was a want, an autopilot was a dream and an inboard diesel was way beyond our meager budget.

Whiskeyjack ticked all of the boxes on the list.  Her original owner, and subsequent owners had all been as crazy as we soon realized we were, for they invested far more in this little boat then they would ever get back.  Yeah, she wasn't the prettiest belle at the ball, and her frock was a little worn, but she came with a hell of a dowry.

Here's how she looked at the beginning of our first season of ownership: 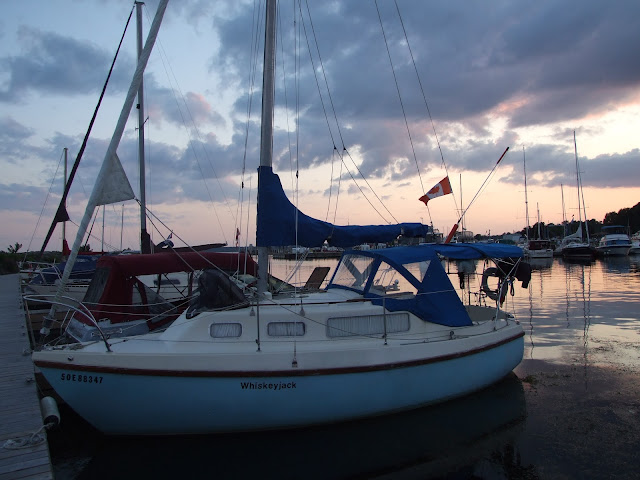 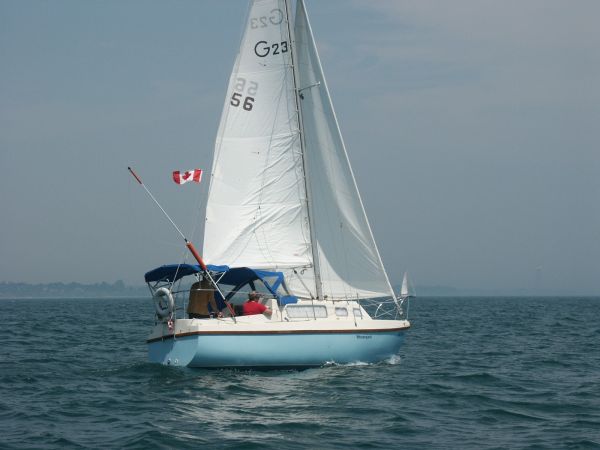 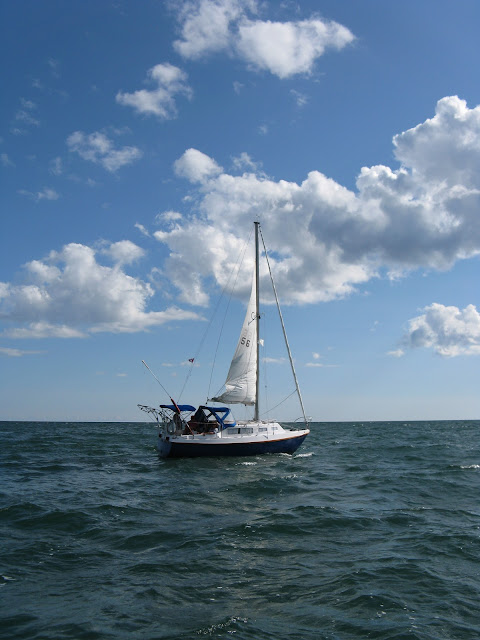 In the fall of  '09,  I convinced SWMBO to look at a boat I had seen for sale.  We didn't need another boat, we weren't looking for another boat, but I had the feeling this boat might need us.... to be continued.


*SWMBO- She Who Must Be Obeyed

Posted by Dock Six Chronicles at 21:45