SODA: State Of the Dock Address

"All this debating goin' 'round..."
-Kim Mitchell


The parking lot is almost empty of boats  and the docks are almost all full, so this is as good a time as any to take a look at how the season is shaping up.

Good news:  The Dock is full.

The view from the deck of Whiskeyjack:

Popularity is a double-edged sword- full slips mean more marina revenue which hopefully translates into steady rates and improved amenities.  But, increased demand also meant that, this year, the "balance -due" date was strictly enforced- if you didn't have your slip bill  paid in full by mid-May, you didn't get a slip.
That has meant at least one change to this season's starting line-up.

Dock Six isn't the only full capacity Dock this season.   Every dock in the Marina is fully booked, or near enough to it.

A wet May has helped ease some of the concerns sparked by low water earlier this spring.  Depth has increased by about 20 cm. in the last three weeks or so.   The Lake is still down from last year, but we're heading in the right direction.

Dock conveniences can still be captured in a single photo:

But, there is now a bike rack in the picture.

We also have a new porta-potty...

which appears to be a two-storey model, according to the pictograph on the door:

Men, unfortunately, are confined to the ground floor, apparently.

Got an email earlier this week:

Please join representatives from Norfolk County, Port Dover Habour Marina, and Marina Management Services, Inc. on Saturday, June 22nd from 8:30am to 10:30am.  This will be an informal "meet & greet" with the staff and the consultant as well as an opportunity to sign up to participate in the process.  The meeting will be held in the Pavilion at Port Dover Harbour Marina."

Those of you who have skin in this game, those with boats on the Dock, or any of the lesser docks, please attend this meeting, or email Tim Keough at tim@marinamanagement.com to let him know you are interested in being part of the solution.

*insert clever segue here*
*if clever segue fails to appear, revert to default workmanlike style, below*
Right then, with the business side of things out of the way, who does have skin in the game this year?

Many of the usual suspects are back for another season:

Jim and Mariann  have both boats in the water, looking as perfect as ever.

Gordon and his lovely wife have returned with Quidi Vidi  . 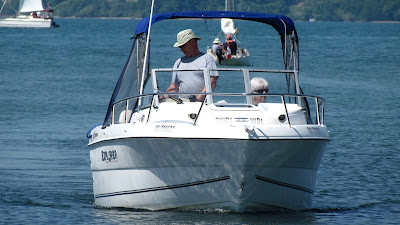 Rick has docked 20th Hole- rumour has it that his boat has left the Dock more than once so far this season.  This shot is from last year- no one can verify it has actually happened this year... 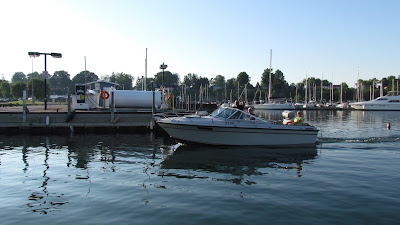 Ivan and Rick and Grant and the rest of the serious fishermen are back.
Jordan has docked  Saphira in the shallows.
Cholita returns with Len at the helm.
Ralph and Julie are back beside Rick... 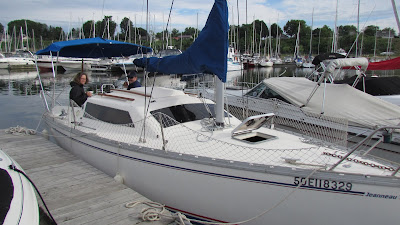 and beside them Mark and Erica have returned.
Hilary is back, and his boat still doesn't have a name.  This may become a contest.  More on that later.
Eric has splashed After School, and Bruce has brought Prolific back for another season, but moved farther down the Dock, 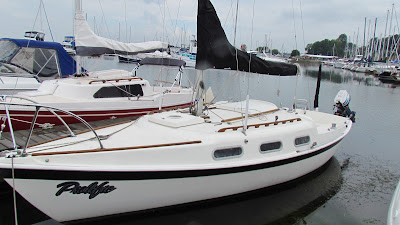 Other Jim has classed up the joint by slipping his Bluenose, Carpe Diem: 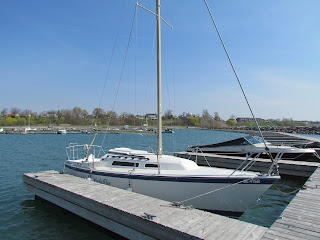 Cocobliss and most of the other bowriders and pontoon boats are back and of course Jack is in, with Blew Orphan: 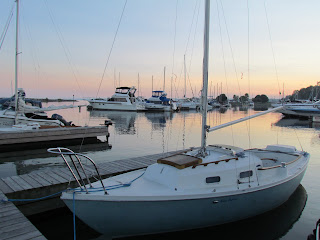 BUT...
JD and Wheelin' & Dealin' are MIA.
Bryan and his Siren are not in.
Will's Tanzer is on the hard.
Ed decided to trailer sail his Siren this year, looking to get more time on the water in more places.

For the first time in years, there is not a single Siren on the Dock.

Marco and Dee have moved back to Sarnia, which opened up a slip, which means we have new neighbours:

Frank and Lorraine  have moved in next door with their Northern 24,

Beside them is another new good old boat, a Tanzer 7.5,  in the hands of returning boaters,  Randy and Monique.  Welcome aboard!

Down toward the end of the dock is another newcomer, another Jordan, and his go-fast boat,
Boss Nova,

The sailboat count is higher than in any previous year, Siren absence notwithstanding; Team Tanzer is certainly making up the difference.

Forget the hokey-pokey.  That's  what it's all about.  Come on along.