Book Reviewsday Tuesday: "Under a Gypsy Moon" - Reflections and Revelations

"Through the mirror of my mind...."
-The Supremes


I once read somewhere that salt water has the power to heal , whether as sweat, tears, or the sea.

This week's Reviewsday book  reminded me once again of the belief in the restorative power of the sea.


Michael Hurley's Once Upon a Gypsy Moon  is, as described, a memoir. 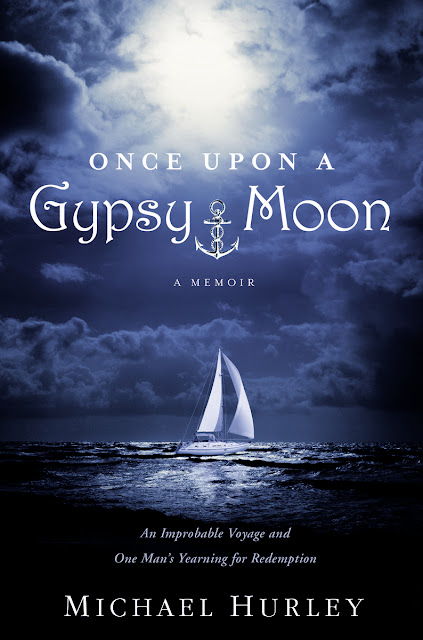 Here's what it's not:


Okay, stop me if this scenario sounds familiar:

A sailor's marriage has hits the skids, his/her successful career has flamed out, his/her post-adolescent kids hate him/her,  his/her 50th birthday is in his wake,  She/he's feeling failure and the tap of fate's finger on his/her shoulder as he/she takes stock of his mortality and  contemplates that She/he is in the latter half of her/his life.

That sailor sets off to that fabled paradise known loosely as "The Islands".  Could be the Carribbean, could be the South Pacific, could be Mexico or Marathon Key.  All we know is, it ain't here, and neither is anything that the departing sailor needs or wants.  Maybe the sailor will find what he/she is looking for.  Maybe he/she will be back.
Yeah, of course this is familiar- this drama plays out in every marina, on every shore, every year.

It's hardly  "improbable."
Hell,  it is a statistical certainty.

It's only "improbable" to those with no connection to the water.

"Once Upon a Gypsy Moon" is a collection of letters the author wrote to folks back home, lightly polished and edited and wrapped with a preface and an infuriatingly tragic final chapter.

I can identify with a large portion of the author's backstory and his motivation  and his travails because, quite frankly, he is a jerk.

And as a self-admitted semi-reformed jerk, I can spot another jerk.

Which made the first two thirds of this book so damn hard to read.

The author is unlikable.

And, make no mistake, the author is where he is at the beginning of this memoir precisely because he is, indeed, a jerk.

Think my description is too harsh?

Here's the facts as the author lays them out in the first two chapters:

He moved his family all over the country furthering his law career, always putting his aspirations first.
He cheated on his wife.
He got caught.
His wife threw him out.
He discarded the woman he cheated with, and is proud of that fact.


What a great guy.  Unfortunately, the author doesn't quite get this.  He turns first to faith as the solution, apparently in the belief that a sinner is cleansed simply by showing up.  Not unexpectedly, the solution remains unfound.


This man needs some saltwater redemption.

Luckily, the author soon figures out that  he is a jerk, and he is not ashamed to let the reader know, and he admits that his ego, his pride and his selfishness were his downfall.

So Hurley sets off aboard his anonymous 32 foot sailboat, Gypsy Moon, from the Magothy river in Maryland to points South, on a leisurely 2 year cruise...

Which turns out to be about a 5 on the "Perils and Adventure" scale.

His passages under sail,  (occasionally interrupted by flights back home), are largely uneventful, with the exception of maintenance issues directly related to the author's disdain for maintenance and stubborn disinterest in all things mechanical.


As the author puts it:

“True Salty Dogs- those self-sufficient Lords of the Deep who write books on navigation and the finer points of sail trim and boat mechanics- have long been a source of intimidation and annoyance to me.  As best as I can tell, there is not a poet among them.  They are math-science folk and engineering types all.  For them a clogged fuel line, battery overload, or electrical malfunction is a thing of rapture, and they set about solving the problem with a kind of Yankee ingenuity and determination “that built this country, by jiminy.”  For me, however, these malfunctions are all signs from a benevolent God that man was meant to sail across oceans by oil lamps, not motor across them with enough spare amps to power a refrigerator and a satellite weather station…” *

So rather than join them, and become a self-sufficient "Salty Dog" himself, he'd rather beat them.

Not a good plan.  Mechanical and gear failures and the impact on the author's finances, timtetable and enjoyment of the ports visited are frequently explored topics.

Along the way, somewhere about the Carolinas,  the author discovers online dating, and what starts as a verbose ship's log now becomes a love letter of sorts to a woman he woos with keyboard and , later meets...

The newlyweds continue the journey occasionally together, in fits and starts,the bride chronically seasick, the author occasionally flying home to build a new law firm, Gypsy Moon finally ending up in the Dominican Republic n the spring of 2011.

At which point, the book becomes an easier read- the author does a lot less hiding behind excuses and his quest for faith and grace, and focuses more on not screwing up and appreciating those around him.

And only when you decide to stop being a jerk, will you find someone you love more than you love yourself, and someone who loves you right back.


As a sailing odyssey, "Once Upon a Gypsy Moon" charts no new courses.  If you're looking for a well-written account of a journey through the eastern Caribbean or a cruising guide, this is not your book.

If, on the other hand, you like a personal story of a man's firsthand account of his  journey to being a better man, this might be the book for you.


* This passage stuck in my craw- I'm going to explore it further in a future blog post.

Posted by Dock Six Chronicles at 20:33