It's Anything Can Happen Day! Apparently.

"Bring hell from above!"
-Billy Idol


From the "WTF?" Files, I bring you our Saturday sail.  Yes, folks, it is Weirder Than Fiction.

Saturday was shaping up to be a less-than-thrilling sailing day, but an absolutely spectacular day to be on the water- hot, hazy, humid.   .   Walking Finn down the Dock to take care of business, we spotted the first ducklings of the season, less than a week old: 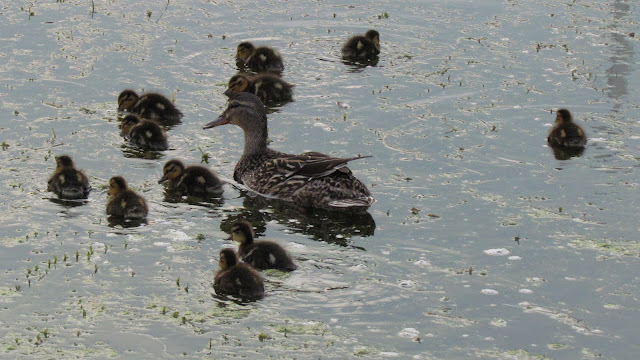 After a leisurely brunch, we lit the iron spinnaker and SWMBO, Finn and I departed the Dock.  As we exited the harbour, we saw an ominous dark cloud on shore: 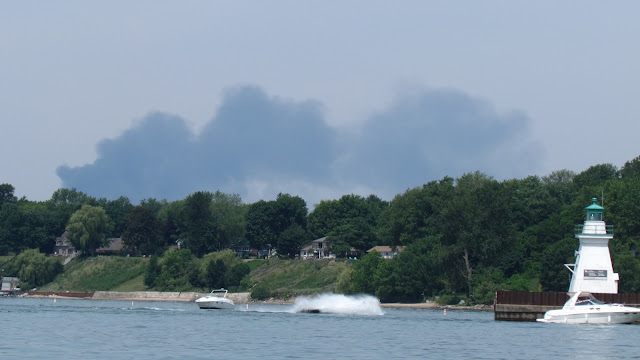 Turns out it was a fire on a potato farm in Nixon, over 10 miles away.  A drive shed full of plastic potato bins went up in flames.  No one was injured, and it was extinguished within an hour, but it sure produced an impressive plume of smoke.

Our timing was right to catch the noon bridge opening, and the wind was less than lacklustre, so we decided to cruise up the river to see what we could see.  The water level is lower than this time last season.  Anybody with a draft deeper than 6 feet is going to have a tough time getting much farther upstream than the Bridge Yachts yard.

We turned around for the trip back just downstream of a docked Nonsuch.  Our depth was reading at 4',and  I was pretty sure Whiskeyjack drew less than the Nonsuch upstream, but I was feeling prudent.  I didn't want to come to an unplanned halt in front of an audience, and there were brunchers sitting at patio tables on both sides of the river.

As we slowly returned downstream toward the lift bridge, we realized we were going to be a few minutes early for the next bridge opening.  The decision was made to cut back speed and just loaf with the current.   With speed reduced to about 2 knots, and the river narrowing, courtesy dictated that we move toward shore to allow faster mastless vessels passage.  The individual on the helm, who shall remain nameless, decided to give a fatbacked SeaRay a wider berth and moved closer to shore...

Remember that part about being prudent, and unplanned halts in front of an audience?  Yep, we did it.  Just downstream of the Port Dover Yacht Club.

Before easing closer to shore we checked the depth , and the shoreline for obstructions and deadheads, but didn't bother to look UP to see if there was any overhead obstruction.

By my on scene instantaneous estimation at least 77% , possibly as much as 93% if we calculate total square footage of foliage,of a shore-rooted tree hung out over the channel, right where we planned to be.
Right now.


We stopped dead, with branches and leaves and bark and twigs and bugs and stuff raining down from the limbs entangled in the rigging.  The unnamed helmsperson calmly asked what to do and the unnamed person who was not on the helm  powered up the mighty single cylinder diesel and harnessed all 9 horsepower to drag us shamefacedly out of the tree we were hung up in...

... while the unnamed helmsperson swung the wheel hard to port to take us back upstream.

Within seconds we had Whiskeyjack sorted and back on course,albeit with forestry-evading deviation now calculated, and we could see the trail of arborial carnage left behind, as foliage dropped from the decks, rig and canvas into the water. A quick cursory inspection did not reveal any damage and no evidence of the incident remained aboard..

We  left the river , raised the main, unfurled the jib and loafed in the light air while laughing about our experience, and debriefing on how to ensure we don't repeat it.

Upon returning to the Dock, I inspected the rig more closely for damage.  We got off easy.  Some leaves rermain stubbornly attached to the masthead: 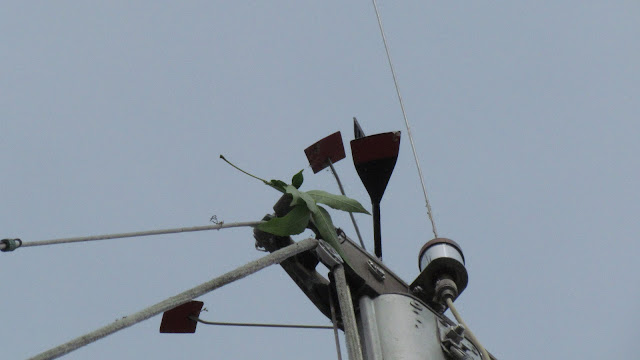 And our windex is now on a new angle. 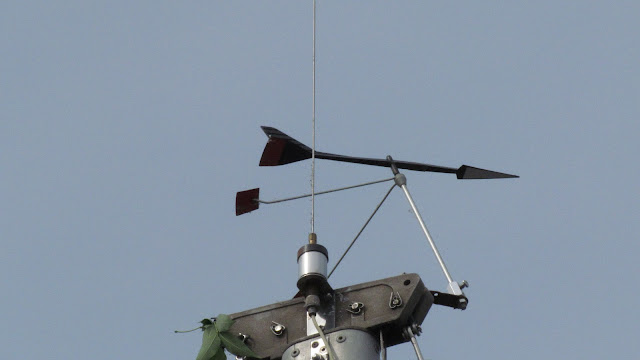 It hangs up on the VHF antenna slightly, but I'm not sure it is a big enough issue to worry about before winter haul-out.