"Bait your hook and keep on trying..."
-The Marvelettes


Bass season opened on Saturday, and I realized I have been remiss in  covering the fishing action on the Dock.  Speedboaters and sailors get the spotlight week after week, but the anglers?

And not just because I was bribed with free fish.  More on that later.

Just for giggles, I counted the number of boats on our dock with fishing gear installed.  My informal and unscientific poll revealed that more than half the boats on the Dock could be considered, construed or confused with fishing boats.

More than half.  That's a lot of boats and boaters. And I haven't given them their due.

Saturday was the opening day of Bass Season, although some were confused about whether it was, indeed, Opening Day.  See, for some strange reason, the government body which oversees fish stuff doesn't say "Bass Season begins on Saturday June 23";  instead they declare the season to open on "the fourth Saturday in June."
Which is the last Saturday in June, right?
Nuh-uh.  Not this year.  It was last Saturday, which is not the last Saturday.  Got it?
This is apparently an intelligence test for anglers.

At least one fisherman on the dock found himself scrambling to get down to his boat and catch some fish after doing the math over his morning coffee.  Or being reminded by his wife.

Rick from The 20th Hole had caught his limit by 9 am.  Gordon and Glennis decided to just let their beautiful Campion Quidi Vidi run and not worry about dropping lines in the lake. 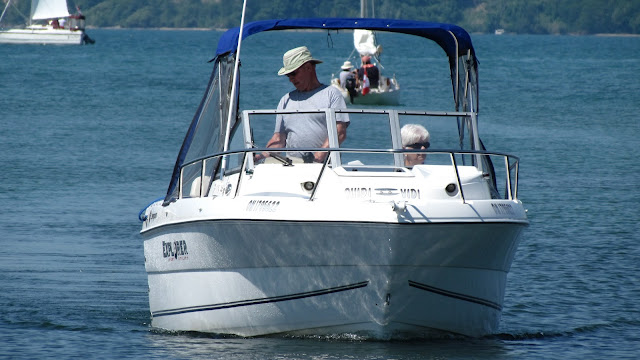 Hunter and his wingman Ben, from Slip 105, filled their stringer after a tough afternoon of tubing: 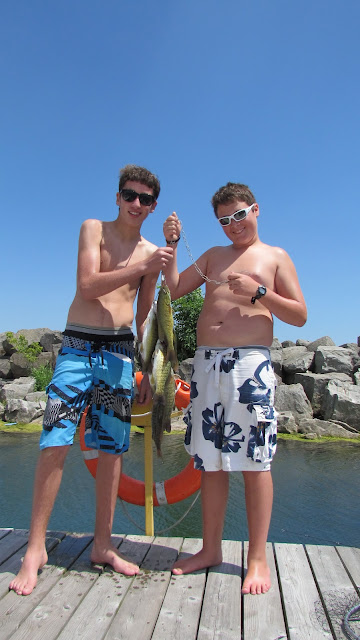 Ivan brought home the fillets on the fin as well. 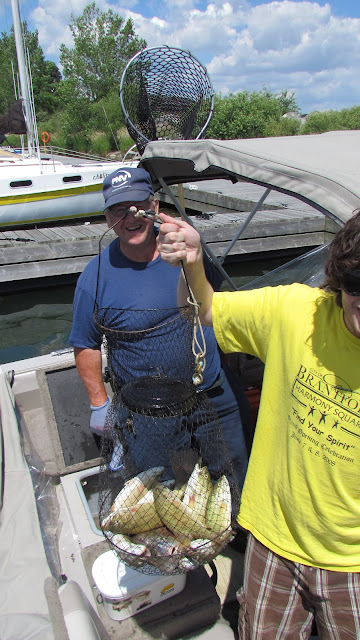 While bass were the stars of the show over the weekend, perch season is open year round, and Other Rick and his wife and his dad Grant landed some beauties. 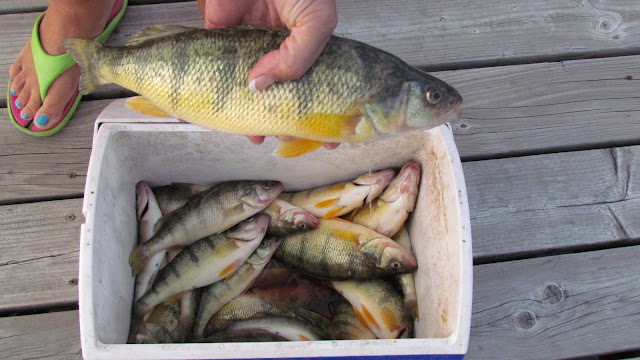 On Saturday, 20th Hole Rick told me he'd catch me a couple of fish on Sunday.  I chuckled at his cockiness.  "Sure," I told him, "I'll fry 'em up for breakfast!"
Sunday morning, 7:30, Finn and I stroll down the Dock, heading for the shore so Finn can do what dogs do.   There's Rick, pole in hand, casting off the Dock. Playing his line, he nods toward a five gallon bucket sitting beside him.
"Take those two," he says, "And bring the bucket back later."
Biggest badass bass I have ever seen. 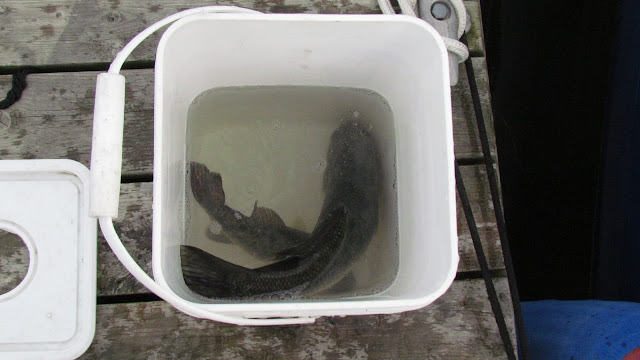 They went home to Stately Jones Manor and now reside in our freezer, awaiting a date with a frying pan, some butter, lemon and a bed of asparagus, I think.
Thanks again Rick!

SWMBO and I have been talking. We've got hand-me-down rods and inherited tackle that have been gathering dust for the last couple of years,  Maybe it's time for us to give this fishing stuff a try.