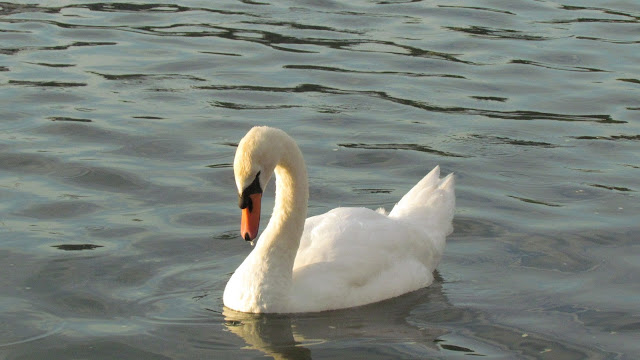 Yeah, I didn't know we had wild swans here on the south coast of Ontario, either.

Turns out, we're not supposed to.

But here he is anyway.


And he is pissed. 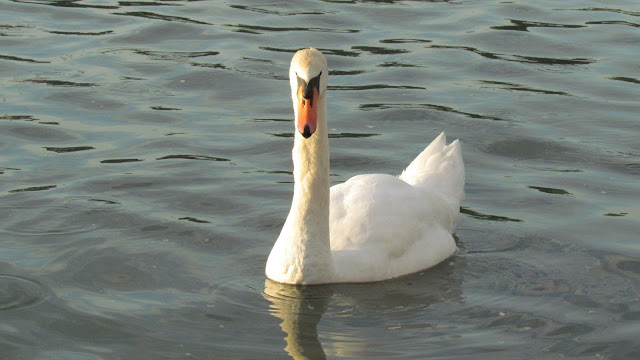 Your humble scribbler, admittedly not a swan expert, did some research, and the swan in question is a Mute Swan.

Turns out that, like much of the other flora and fauna and flotsam and jetsam around the Dock, the Mute Swan is an invasive species.  According to wikipedia :

"The Mute Swan was introduced to North America in the late 19th century. Recently, it has been widely viewed as an invasive species because of its rapidly increasing numbers and adverse effects on other waterfowl and native ecosystems. For example, a study of population sizes in the lower Great Lakes from 1971 to 2000 found that Mute Swan numbers were increasing at an average rate of at least 10% per year, doubling the population every seven to eight years.  Several studies have concluded that Mute Swans severely reduce densities of submerged vegetation where they occur.
In 2003, the U.S. Fish and Wildlife Service proposed to "minimize environmental damages attributed to mute swans" by reducing their numbers in the Atlantic Flyway to pre-1986 levels, a 67% reduction at the time. According to a report published in the Federal Register of 2003 the proposal was supported by all thirteen state wildlife agencies which submitted comments, as well as by 43 bird conservation, wildlife conservation and wildlife management organisations. Ten animal rights organisations and the vast majority of comments from individuals were opposed. At this time Mute Swans were protected under the Migratory Bird Treaty Act due to a court order, but in 2005 the United States Department of the Interior officially declared them a non-native, unprotected species.  Mute Swans are protected in some areas of the U.S. by local laws, as for example in Connecticut."

On the other end of the Squeee! Cute Index:   Turkey Vultures lurk on the breakwall:

They showed up when I launched leaky ProjectBoat.  An omen?

Meanwhile, the dawgs are enjoying Dock life, and Ellie has apparently learned to levitate.

.... While Bello is learning how to sail:

Of course, there is the usual assortment of those fecal- firing fowl, gulls and geese.
No pictures.
You know what they look like.

No heron sightings yet this season.  Hopefully I can snap a pic before they head south.

As always, we'll keep you posted.