As prodigious as we are with rum consumption,  we are as miserly with electrical power aboard Whiskeyjack.

We light the cabin with battery powered LED lighting which consumes a relatively small amount of power compared to traditional Edison-style bulbs, but LED lights have drawbacks not considered when we installed them.

In fact, a lot of little bugs like LED lights a lot.

(Yes, we have screened hatches, but that only keeps insects out that are already out when the hatches are closed- those insects that are in when the doors close remain in, swarming around the lights.  It's sort of like a dance club at last call.... in reverse.)

The ambience factor, or lack thereof, with most LED lighting is also not inconsiderable. The LED lights aboard bounce off the fiberglass overhead and fore and aft bulkheads, casting a dental-office style glare, hardly inducing one to curl up with the latest copy of Good Old Boat.

There are certainly alternative colour LED bulbs, in warmer and fuzzier hues,  but retrofitting all of the panel-wired fixtures below deck is not an inconsiderable expense, and a project  filled with trepidation.  What if the bulbs we feel are bright yet warm, clear yet cozy in the store/at the show/ in the display/whatever feel different in the confines of our cabin?  Most vendors have a "no return" policy on electrical stock, bulbs included, so I envision ending up with hundreds of dollars of perfectly good yet completely unacceptable lightbulbs occupying valuable booze spares stowage real estate.

And there is still going to be the infuriating infernal interior insect infestation in orbit around the aforementioned illumination.

So, it was time to suss out some alternatives.

Candles cast a warm glow, but lend little illumination, as evidenced by the small votive candle in the cockpit below.  An advantage over fixed-site lighting, however, is the convenience of being able to move light from deck to Dock to cabin to cockpit.  More flexibility in lighting means less lighting required on board, and less storage space dedicated to redundant illumination. 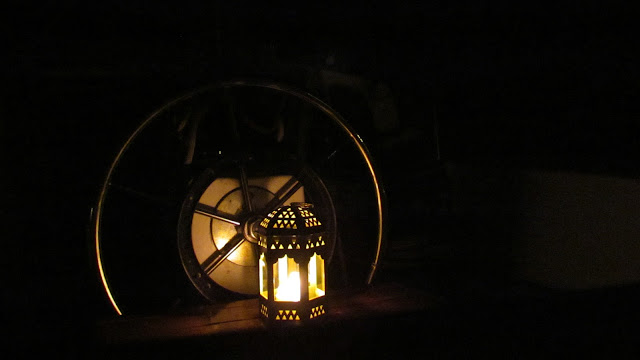 It got me thinking, though.  Why not  try going old school?  We decided to explore the world of lanterns.

Is there an alternative?

We decided to find out.

Here's the parameters:
Non-electric light suitable for reading/working in the cabin.
Portable- usable in cockpit, cabin, on deck or on Dock.
Unattractive to insects
Under $25.

First stop, Canadian Tire ,  where, for nearabout $17, I purchased a World Famous hurricane lantern, not exactly as shown, below. 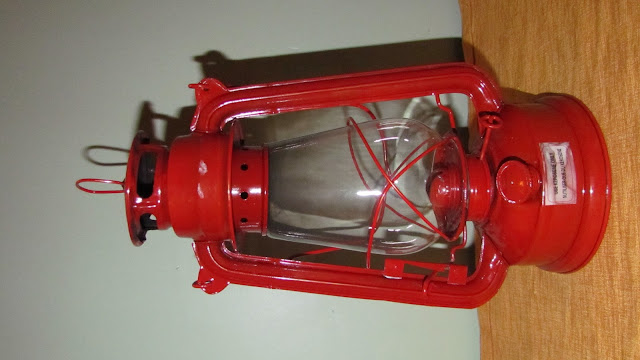 When I purchased the lantern, it had a "World Famous" label attached to the chimney, which peeled off and fluttered to the floor when the lantern was removed from it's cellophane wrapping.  The lackadaisical label was an accurate indicator of the quality of  the lantern to which  it was formerly attached.  The price was cheap, and the product lived up to the price. Included was a business card-sized slip of paper with filling and  lighting instructions printed in smudgy 6 point type.  The lantern itself  is about 12" tall, with a base diameter of about 5".  The fit and finish appeared sloppy, an impression which was dramatically reinforced later. 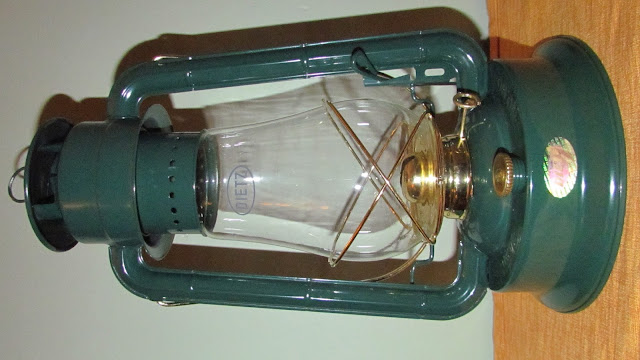 Wow.  What a difference $3 makes.  The Dietz lantern came in an honest-to-goodness box with the globe wrapped for protection.  Included were lighting and cleaning instructions, wick trimming info and a short but succinct trouble-shooting guide. Compared to the World Famous lantern, No. 80 felt huge, standing 15" high with an 8" wide footprint.  Fit and finish was better than expected, with decent plating on the burner, bails, globe plate and tank cap.

With the contestants chosen, it was time to get them ready for use. Both lanterns are kerosene fueled, so after a perusal of the filling directions, the lanterns were placed on the table and  loaded with keros...
...sonofabitch!!!!!...

The World Famous lantern's instruction slip included the cryptic phrase "Do not fill tank more than half"  There was no explanation for this fortune-cookieish bit of advice, and also no instruction on how one determines when the lantern is half full- there are no "fill to here"  markings, and the small fill port is completely obscured by the spout of the kerosene container providing sustenance, so trying to eyeball the level doesn't work.  So, in typical Dock Six fashion, I guessed.

And overshot the mark.

I discovered this fact when kerosene leaked STREAMED out of the tank, not from the fill port, but from the tank itself.  It turns out the tank has a large hole where each of the legs that hold the chimney are attached.  I cleaned up the kerosene from the table top, aired out the cabin and turned to fueling No. 80.

Which was accomplished in an incident-free fashion.


With the candidates ready for action, it was time for the illumination elimination round.  Time to introduce the incumbent to the festivities, the $2 LED lamp that hangs over the table, affectionately known as the " UFO Light" 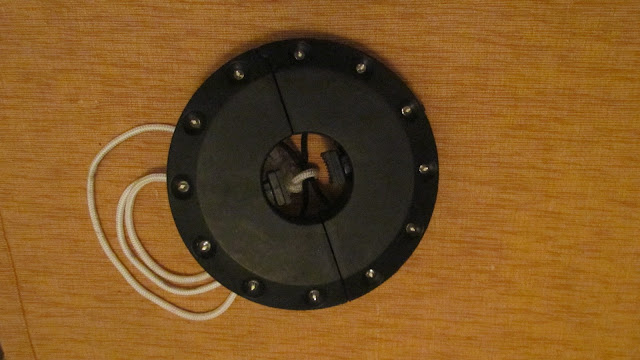 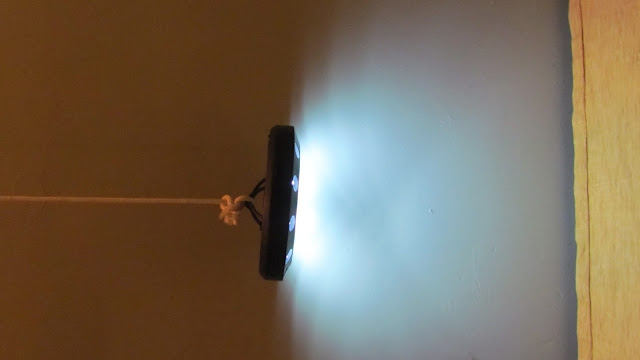 Here is how a copy of Good Old Boat looks under the light cast by UFO.  Lots of illumination, but lots of glare as well. 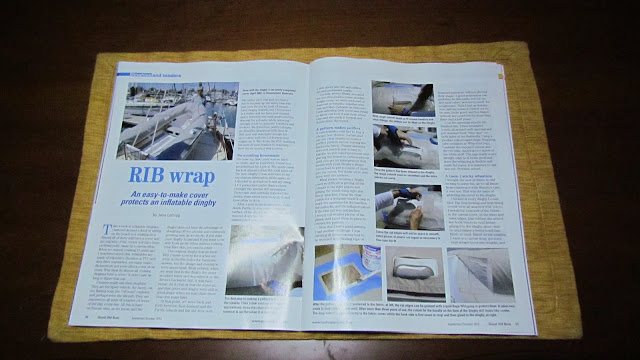 That is the current cabin lighting standard aboard.  Let's see how our competitors compare.

With some fiddling, with both hands as the globe refused to stay raised thanks to the poor fit of the lifting bail, World Famous was persuaded to light, and with further fiddling, encouraged not to smoke (at least not until it's 18 years old and/or no longer resides in our house).

Illumination was provided, but, like every other aspect of this lamp, it was disappointing. 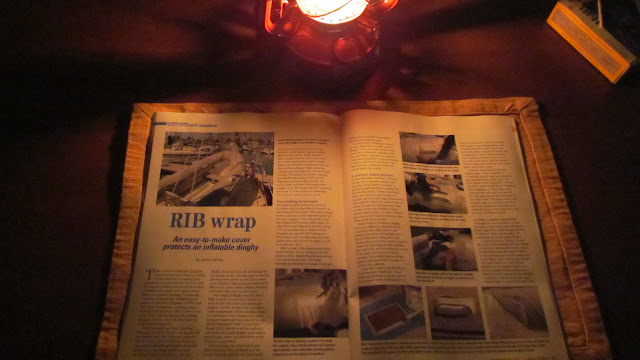 One can see that there is a magazine in front of them, one can discern that there are photos, one can read the title, but beyond that, gathering information from the page is a struggle.  Illumination was spotty, with shadows and flickers

I briefly suspended the test to trim the flickering wick and wash the soot off the globe, hoping to increase the output.
The result? 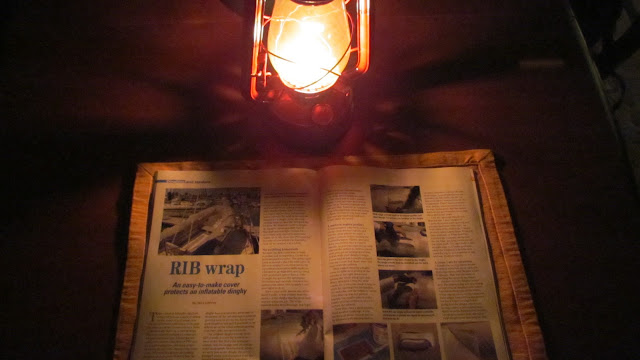 Right then, let's see what No. 80 brings to the table.

Definitely easier to light, requiring only one hand.  Lift the globe, lock the bail, set the wick, strike a match, trim the wick, lower the globe, done.

The result?
Usable illumination.  Warmer, brighter, over a larger area with no shadows or flickering.  Not nearly as bright as UFO but easier on the eyes and bug-free! 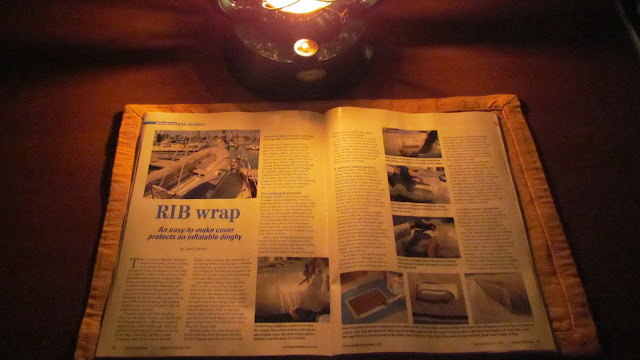 Further testing in the cockpit on our last sail of the season earned compliments from Jack and Melanie on how well No.80 lit the cockpit, with none of the breeze induced flickering and relighting as was often the case with citronella candles, and no wax on the cockpit sole.

I think we might have a winner, with some improvement to the plan.   A second lantern is needed to fully light the cabin, and lighting the v-berth with a lantern this size isn't gonna work, so there is no choice in retaining some LED lighting.
The "cozy" factor is not to be underestimated, however, and the consistent response is how much "nicer" the lantern light feels compared to the electric alternative.
We're gonna give it a long term test next season, and we'll let you know how it goes.

Posted by Dock Six Chronicles at 11:41